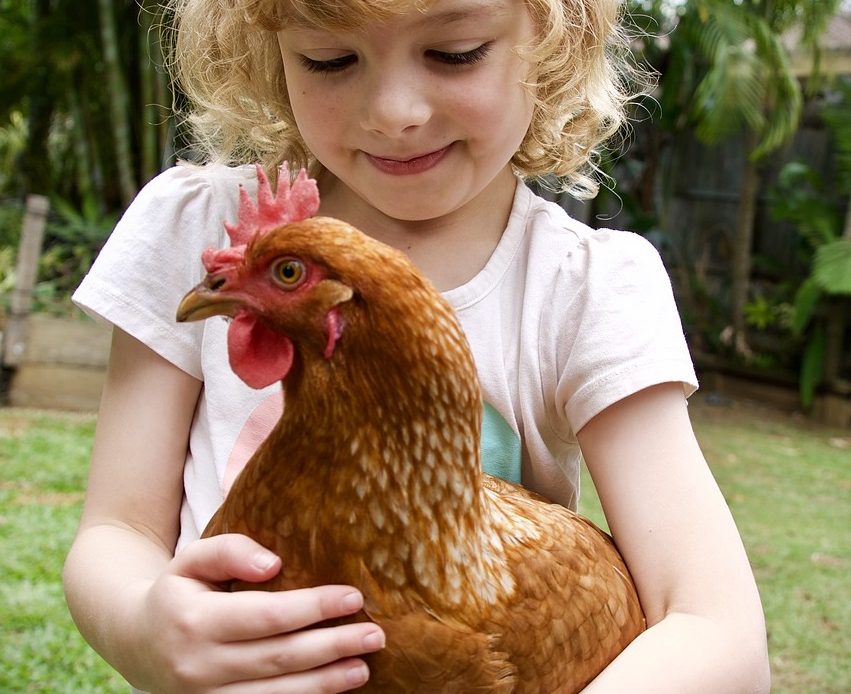 Raising chickens can be immensely rewarding! They are some of the most characterful creatures we have the pleasure of domesticating. They’re also surprisingly intelligent – more so than we may be giving them credit for being. With that in mind, you may be wondering – can chickens feel love?

Yes, it’s entirely possible for chickens to feel affection for those they are close to. While this may not be ‘love’ in the human sense, it’s true that chickens learn to recognize their owners, and can also show signs of affection in return.

If you’re wondering whether or not your chickens are showing you affection when you go to feed them, keep reading – and we’ll break down all of the signs to look for.

While you can’t expect a chicken to complete calculus problems any time soon, they are capable of incredible emotional intelligence. For example, the average chicken can memorize up to a hundred different human faces. That means your chickens will be able to tell you apart from intruders.

What’s more, chickens have strong bonds with their chicks – they talk to their eggs, which means they actively build relationships before hatching. That’s a clear sign of love between mother and child at the very least!

Various studies over the years suggest that chickens are indeed capable of empathy, which of course lends to hens in particular being protective over their children. What’s more, there is various evidence to suggest that a group of hens may have a ‘hive mind’ approach to certain stimuli – in that they can actually share in certain emotions and find solace in one another!

What’s really curious is that the average chicken is able to understand that when an object is moved out of their sight, it still exists. This is called object permanence – and it’s an important marker for intelligence in a variety of animals.

So, there’s a good chance your chickens can recognize you – but do they love you?

Signs Your Chickens Are Showing Love

Much in the same way that cats or dogs show love and affection, chickens display idiosyncratic behaviors that we have to interpret. Did you know, for example, that a chicken is likely to create loud noises around you when they want attention? They have much in common with young mammals in this regard.

When raising backyard chickens, you may also find that they like to rub up against you to show affection. This tends to be an anecdotal point, however, it’s generally agreed upon by seasoned chicken owners that a quick beak rub is a sign of love – of sorts!

Chickens that are receptive to being stroked or even picked up at all are likely to hold some kind of affection for you. If a chicken does not want to be held or ruffled, they will let you know!

One of the biggest tell-tale signs of a chicken showing attachment or affection, according to some, is simply through wanting to be near you. In some cases, it may be that they are hungry, need fresh water, or are just curious.

That said, as we explore in our guide to free range chickens and roaming, chickens love predictability. Much like dogs, the average chicken will adapt very quickly to a certain routine. Therefore, if you continue to show them love, affection and keep them fed and watered every day, it’s highly likely they will grow dependent on you.

It’s also why you’ll likely be followed around so much, or why your chickens may not escape the compound as freely as you might expect them to!

Ultimately, the answer is – possibly. Chickens feeling and showing love tends to be answered anecdotally – what are your own experiences with raising chickens, for example?

That isn’t to say chickens are not complex enough to feel certain emotions. For example, it is fairly obvious that chickens feel fear – it’s what helps them to react when predators are close. Most (if not all) animals can experience fear.

It’s also observed that, sometimes, chickens like to let loose and have a little fun – it’s certainly easier to spot a free-spirited chicken when they have enough space and opportunity.

So, over to you – the science suggests chickens likely do feel and show love – but what about your chickens, if you have any? Do your birds show any affectionate behavior, and do you have any interesting stories to share? Do let us know in a comment below.