Burpless Cucumbers – What Are They? 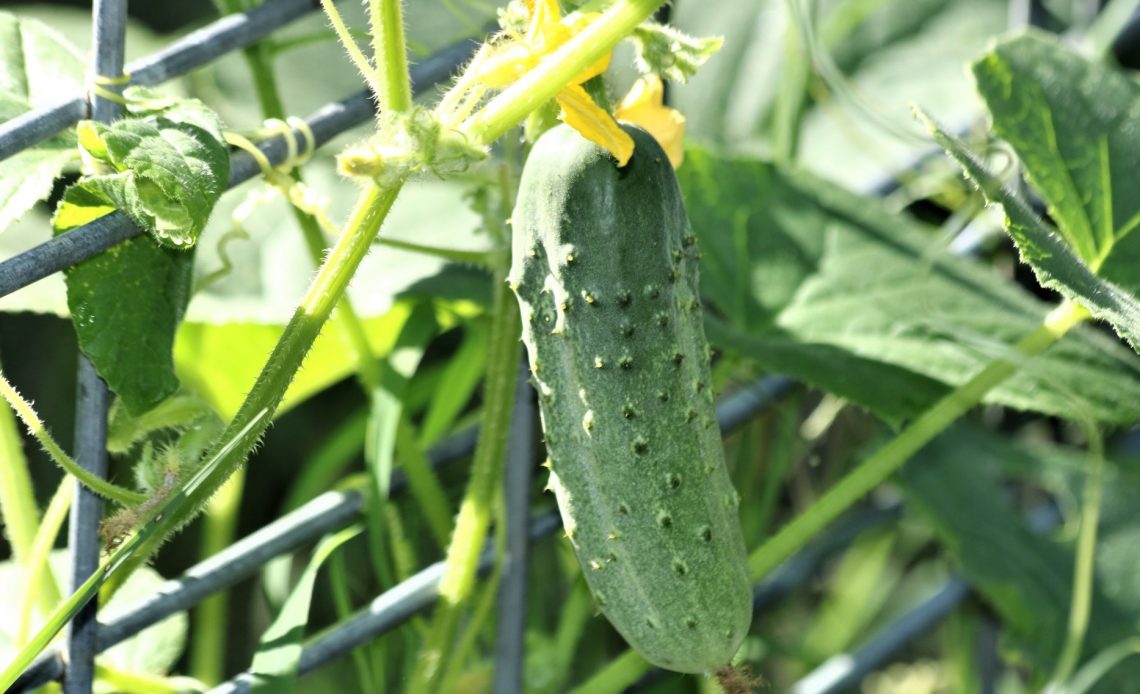 A crisp, snappy cucumber straight from the garden is a refreshing summer treat. Unfortunately, in certain individuals, cucumbers can cause digestive upset, especially burping. If you love to eat cucumbers, but you avoid them because they give you gas, you may be wondering if the popular burpless cucumbers can allow you to enjoy the best of both worlds.

Burpless cucumbers have been hybridized to contain lower levels of cucurbitacin, a compound found in the stems and skin of traditional cucumbers that may contribute to burping. Burpless cucumbers are easy to grow, especially when planted in tandem with their favorite companions, and are delicious when eaten raw in salads, sandwiches, and green smoothies.

Most cucumbers contain cucurbitacin, a bitter-tasting compound that may contribute to gas, bloating, burping, acid reflux, and indigestion in sensitive individuals. This compound can be found in varying degrees in the stems, leaves, and skin of traditional cucumber varieties. It’s also found in zucchini, pumpkins, and other gourds.

Unlike classic cucumber varieties, burpless cucumbers have been hybridized to produce very little, if any, cucurbitacin. As a result, these plants make cucumbers that are sweeter, less bitter, and may be easier on the digestive tract.

While burpless cucumbers contain less cucurbitacin, there’s evidence to suggest that cucurbitacin may not be the cause of cucumber-related digestive issues in the first place. Sometimes the culprit behind an individual’s cucumber intolerance is simply the cucumber variety, with English cucumbers causing fewer symptoms than American cucumbers.

Cucumbers have paradoxical effects on digestion. In some individuals, they contribute to GERD, bloating, and gas. But, in others, they help reduce acidity and soothe the stomach lining. Because cucumbers have a fairly neutral pH, it’s possible that people who produce gastric juices that are too acidic or too alkaline are more likely to experience stomach discomfort from eating them, while other individuals with more neutral intestinal pH experience no symptoms. Regardless, cucumbers affect each person differently, and it’s a process of trial-and-error to determine which ones contribute to your symptoms and which ones don’t.

That said, for individuals who truly have a sensitivity to the cucurbitacin in classic cucumber varieties, burpless cucumbers can be tremendously helpful in preventing symptoms. Their naturally low levels of this compound can drastically reduce the number of side effects cucumber-sensitive people experience.

How do burpless cucumbers grow?

Burpless cucumbers grow just like other varieties of cucumbers, so if you’ve planted traditional cucumbers in the past, this will be a seamless transition for you. Cucumber plants are sprawling vines with large leaves that can cover a lot of ground. If you have enough space in your garden, you can let them grow wild, but if you’re trying to make room for other plants, too, you’ll have to get creative.

Many backyard gardeners opt to grow their cucumbers, burpless or otherwise, up a trellis. These plants perform very well when grown vertically, and gravity helps each cucumber develop a nice, uniform shape — growing cucumbers on the ground can result in deformed fruits. This also leaves them susceptible to insects and rot from the lack of air circulation.

When should you plant your burpless cucumbers?

Burpless cucumbers do not tolerate the cold, so it’s best to put them in the ground after the last frost, ideally when the mercury outside hits 80 degrees Fahrenheit. Sow your seeds in fertile, slightly alkaline to neutral soil that is well-drained, but can be kept moist. Place the seeds in a hole one-half inch deep. Once your seedlings begin to sprout, thin them out leaving a three-foot space between plants.

You can also start your burpless cucumbers indoors. Sow one to three seeds in a seed pot three to four weeks before the final frost of the season. Be sure to keep the seedlings in a warm place near a window, where they’ll get enough sun. You should also keep your seedlings moist, but not soggy. Cucumbers love moist soil, but standing water kill them.

Companion planting protects plants from insects and diseases while improving soil conditions and pollination rates in your garden. If you want your burpless cucumbers to grow their best, be sure to keep the right companion plants nearby.

Beans are great for companion planting with burpless cucumbers. Legumes of all types add valuable nitrogen to the soil that your cucumbers will love, plus beans can be trained to grow up a trellis near your cucumbers, saving more space in your garden.

Dill, too, can be used as a burpless cucumber companion plant. This low-growing ground cover protects the soil around your cucumbers from weeds and moisture loss. Plus, come harvest time, you’ll be at an advantage because you’ll have two of your basic pickling ingredients at hand.

Be sure to avoid planting melons, squash, and gourds near your burpless cucumbers. These plants all compete for nutrients and space, and because they’re all relatively fast-growing, they may smother each other. These plants also share diseases and pests, so for best results, keep them all far apart.

When can you harvest burpless cucumbers?

Burpless cucumbers are ready to be picked about two months after planting. Each plant can produce around 10 cucumbers, making them a high yield crop. And because these plants are relatively deer-resistant, you don’t have to worry about  harvesting the cucumbers too quickly. Once they ripen, they can stay on the vine for a day or two without tempting the local wildlife.

It’s best to pick the cucumbers when they’re around 8 inches long. Any shorter than that and the cucumbers may not be ripe. Be sure to harvest your cucumbers before they get too long, though, because long cucumbers waste the plant’s energy, and they have a tougher, drier texture that’s less appetizing.

Sometimes cucumbers turn yellow on the vine. This is not a sign that you’re plants are sick, but rather, that the cucumbers have become overripe. As the cucumbers ripen, they lose their ability to produce chlorophyll, hence the yellow color. Just snip them off the plant and toss them on the compost heap. They’re not fit to eat, but they make great fertilizer.

Which types of burpless cucumbers are best for beginners?

Burpless cucumbers are seeing a surge in popularity, with new cultivars making their debut every growing season. While it can be fun trying the latest seed trends, you can’t go wrong if you stick to the tried-and-true varieties.

“Sweet Success” is another good option. This plant produces some of the sweetest cucumbers you’ll find anywhere, which may make them better suited to eating raw rather than pickling. “Sweet Success” is also extremely hardy and resistant to many of the diseases that plague melons and gourds, including scab and leaf spot.

Another burpless cucumber that’s a bit more adventurous is the “Early Spring” variety. These cucumbers grow up to a foot long and take on an interesting curled shape when grown on the ground. These burpless cucumbers take up a lot of space, so they’re not for everyone. But their sweet taste and plump, crisp skin make them a must-try for serious cucumber lovers.

Crisp, juicy sweetness. That’s the first thing you’ll notice when you bite into a burpless cucumber. The skin has a nice bite to it, without being leathery or mushy, and burpless cucumbers tend to produce fewer seeds, too. Because these plants create only trace amounts of cucurbitacin, there is almost no bitterness to burpless cucumbers — and that goes for all varieties.

Burpless cucumbers offer a more uniform tasting experience. They naturally don’t produce much cucurbitacin. So while the subtle nuances vary by variety, the cucumbers that you harvest from these plants will taste very much alike.

What are burpless cucumbers used for?

Because burpless cucumbers tend to be sweeter, they’re much better for snacking than other, non–burpless varieties. The lack of cucurbitacin in their skin makes it less tough and leathery, and more delicate and crisp, like the skin of an apple. So you don’t even have to peel burpless cucumbers, you can just wash them off and eat them raw. They’re perfect in salads, sandwiches, and vegetable trays.

Fresh burpless cucumbers are delicious in green smoothies, too. They can even be added to sweeter fruit smoothies for a healthy dose of greenery without affecting the taste. If you have an infuser pitcher, fill it with water or green tea and try tossing fresh slices of burpless cucumber in with some berries or herbs to create a refreshing summer beverage.

You can also use burpless cucumbers to make pickles. However, because they can become soft during the enzymatic process of pickling, burpless pickles are better used in fresh pack pickle recipes. This is a quick process with a shorter curing time that prevents delicate burpless cucumbers from being turned into mushy, inedible bits. Fresh pack pickles are less labor-intensive than traditional pickles, and they make a tasty homemade relish, too.

Are burpless cucumbers worth it?

But growing burpless cucumbers still has its advantages. The low cucurbitacin content acts as natural quality control to give you the tastiest cucumbers possible. These are some of the sweetest, most consistently delicious cucumbers you’ll ever harvest from your garden.

Even though they may not reduce your gastric symptoms, they can make your cucumber-tasting experience even better, so there’s no reason not to switch out your classic varieties for burpless cucumbers during the next growing season.