7 Dill Companion Plants – And What To Avoid 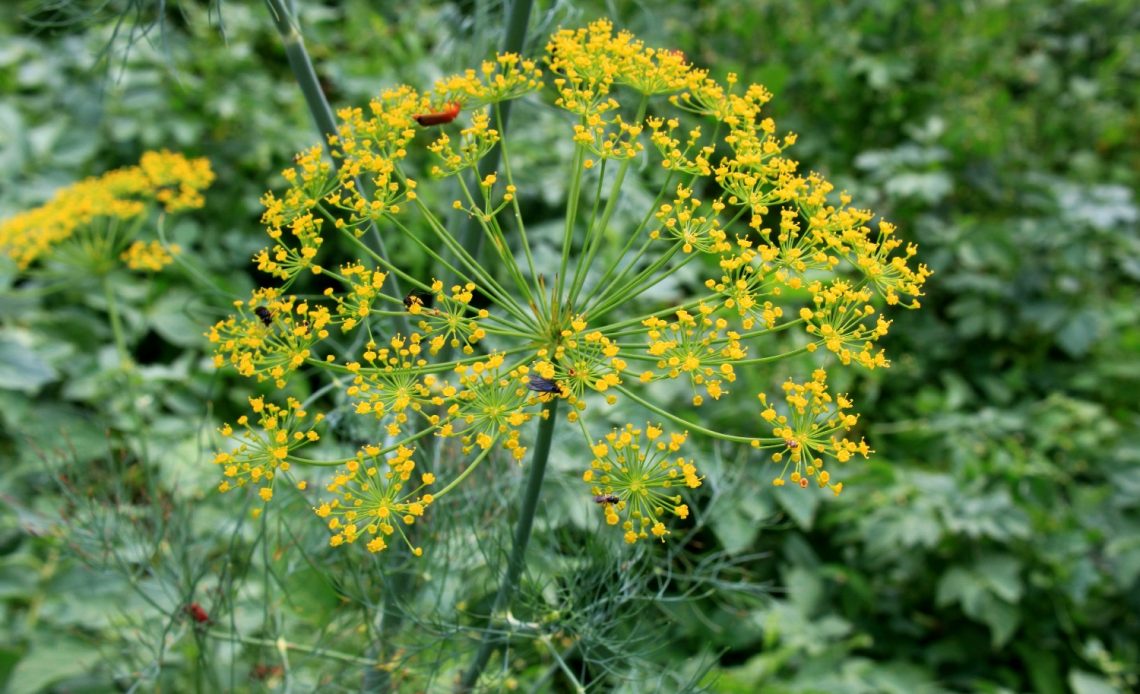 Dill is a common herb found in various recipes, from salad dressings to pickle jars. Its sweet, unique flavor gives a real taste of summer. It’s also rewarding to grow in your garden from scratch – but have you ever thought about cultivating a few dill companion plants, too?

Plants and vegetables such as asparagus, cucumbers, and corn are all ideal companion plants for dill. This aromatic herb requires very little maintenance and can help protect other growths from common pests. Moreover, it’s also great for attracting pollinators such as bees, butterflies, and other beneficial creatures.

Why should you grow dill companion plants?

Companion planting is a proven strategy for helping to protect weaker specimens and to help unite pollinator-attracting power across your garden. Dill is a highly versatile herb – well-known for discouraging mite and aphid visitors – making it the perfect companion for scores of weaker specimens. It’s also great for growing alongside tomato plants likely to suffer from hornworm destruction.

Growing companion plants with dill is less about protecting the herb itself as it’s relatively hardy (particularly across USDA zones three to seven in summer and zones nine to 11 in wintertime). Instead, you should focus on growing dill to help protect flowers and plants that are most likely to fall prey to destructive insects.

If you’re rewilding your yard, it pays to use companion plants as much as possible to foster hardiness across your garden and to ensure your beds and plots continue to self-pollinate for months ahead.

What to look for in dill companion plants

The best dill companion plants can readily grow in full sun – as hardy and fast-growing as this herb may be, it never fares well in the shade. You should also consider pairing dill with plants that prefer well-draining soil – flowers and vegetables that suffer from too much moisture, for example, are likely to accompany dill comfortably.

Dill pairs well with vegetables that fall prey to hungry insects such as cabbage loopers – meaning brassicas such as broccoli, cabbage and collards will often benefit from this herb’s deterring scent and insect predator attraction.

Interestingly, planting dill too closely to growths it’s related to may prove detrimental to growth across your plot – we’ll cover this in more detail further down.

Plants to grow with dill

The following plants and vegetables benefit from accompanying dill in your plot -and in most cases, the benefits are mutual.

Dill is one of the asparagus plant’s best protectors. Asparagus suffers from aphid attacks – if left unprotected, these winged pests can cause severe damage to your crops. Many asparagus plants will rot and die if aphids are left to feed on them – and dill, thankfully, attracts predators to help thin the crowd.

Dill will attract predatory ladybugs and lacewings, for example, which will readily feast on any aphids daring to test your asparagus. This natural protection will prevent you from spraying your plot with insecticide, and there’s no danger of dill affecting the growth or taste of your asparagus when it comes to harvesting.

Yarrow, much like dill, will grow abundantly in full sun and can actively help to prevent the herb from insect attacks. While dill is relatively resistant against a host of minibeasts, it can fall prey to armyworm attacks.

Here’s where yarrow comes in handy – it frequently attracts ladybugs, which eat armyworm eggs as soon as they’re laid. Yarrow will also help to boost pollinator appeal around your dill, proving immensely popular with bees and butterflies.

Cucumbers fall prey to aptly-named cucumber beetles – and, like asparagus, your pickles can fester and die if left unprotected. Thankfully, dill is a natural attractor of braconid wasps, which are just some of the hungrier predators of these destructive beetles.

Again, like asparagus, growing dill and cucumber together will have no detriment upon their growing habits or their taste when harvesting and serving. Dill can, in fact, help to improve the taste of cucumber before harvesting, with more mature vegetables likely to benefit from stronger flavors.

Corn plants are some of the most feasted-upon by destructive insects (to many a farmer’s chagrin) – corn earworms, aphids, and cutworms are most likely to munch through your crops.

Luckily, dill will attract sentries of protective insects and minibeasts – such as parasitic wasps – which will pick off the hungrier pests buzzing around your corn. These wasps will eradicate pest populations without damaging your corn, too, making them ideal natural replacements for damaging pesticides.

Corn grows wildly in the open sun – perfect for accompanying dill – but you’ll need to ensure the former is at least four inches in height for the best results. It’s also a good idea to let your dill flower fully to attract wasps.

Both onion and dill produce strong fragrances, which – while highly different – can deter a variety of destructive pests. For example, a clutch of dill is highly likely to prevent invasive Japanese beetles from eating away at onion crops.

Onion and garlic, in particular, also work hard to deter aphids from your dill thanks to their strong scents.

Much like dill, onions will also welcome several varieties of bees and flies – both of which will help keep your garden well-pollinated. There are added benefits to growing onion and dill together at harvest, too – as dill can help to bring out the flavor in its companion.

Caution – don’t confuse growing onion with fennel when planting with dill. Fennel can suffer from growth stunts and cross-pollination if paired with the herb.

Basil is another sweet, flavourful herb that’s just as easy to grow, providing you keep your soil or medium draining clear and grant up to eight hours of direct sun each day. Planting dill and basil together can help to enhance the flavor in each of your herbs, making for a tastier harvest.

Basil is one of several herbs that accompanies dill comfortably – but some species are exceptions to the rule, such as cilantro (coriander), which can struggle with cross-pollination.

Broccoli is one of several tasty brassicas that thrive under dill companionship thanks to the herb’s pest-protecting nature. While broccoli is man-made, it’s not entirely immune to natural elements, meaning it’s likely to fall prey to cabbage worms and loopers.

As with asparagus and onion, dill is fantastic to harvest alongside broccoli, making for a healthy, flavourful crop you can uproot simultaneously. Similarly, consider growing collards and Brussel sprouts alongside dill to help ward off worms and loopers – and to build your vegetable crop even further.

Plants you should avoid growing with dill

While dill is fairly undemanding, it’s infamous for cross-pollinating and often getting in the way of other plants. Some plants and vegetables – notably weaker specimens that don’t compete well for sunlight – may be choked back by dill as it grows a canopy far and wide.

Dill may cause problems for similar plants and herbs within its own family – because it can slow down growth and even spoil the taste of your harvest. Here are a few plants you should never plant alongside dill.

While many gardeners grow dill and carrots together, the former can actively stunt healthy growth in the latter. These plants are also closely related – meaning there’s a risk of cross-pollination, causing changes in flavor and consistency. While both plants thrive in the full sun and well-draining soil, keeping them as far apart as possible is worthwhile.

As a novice gardener, it may be easy to confuse fennel with onion occasionally – but it’s actually a member of the carrot family. As with carrots, fennel is susceptible to cross-pollination, meaning invasive dill is likely to cause problems for your harvest.

Unlike carrots, however, the problems aren’t associated with stunted growth, but with taste. Dill’s cross-pollination can cause the taste of either plant to spoil – the opposite of mutually beneficial.

Both lavender and dill are regarded as reasonably easy-going plants that make great companions for others – but they’re incompatible thanks to growth stunting. Lavender tends to fare well with undemanding plants that won’t compete for lots of sunlight and nutrients.

Dill is, by nature, a fast-growing, sunlight-stealing herb – and is likely to stunt lavender growth in most species. In addition, lavender abhors moisture much more than dill – meaning a plot that’s heavily watered will likely lead to lavender rotting in the short term.

While dill can be fantastic at helping tomatoes thrive away from the threat of certain pests, it can stunt their growth the more it matures. There are some benefits to growing dill and tomato plants together, but if you do, make sure to harvest your tomatoes before the herb covers the whole plot.

This rule will apply to most members of the nightshade family. For example, it’s unwise to grow dill alongside eggplant or peppers for the same reasons as tomatoes.

Is it worth planting dill as a companion plant?

Dill is a tasty herb that doubles as a great natural protector for some of your garden’s weaker plants and vegetables. Providing you carefully match it with specimens that are unlikely to wither from its invasive growth patterns, you can expect a healthy crop of kitchen veggies and herbs for seasons to come.

For the most part, dill is relied upon as a protective companion more than it requires protection of its own. Despite being an aphid attractor, for example, healthy dill will typically take care of itself, as its strong scent can deter heavy attacks.

Dill has a welcome presence in herb gardens, but don’t be too hasty to mix it with nightshades or other species likely to suffer through cross-pollination.