Do hummingbirds feed in the rain? 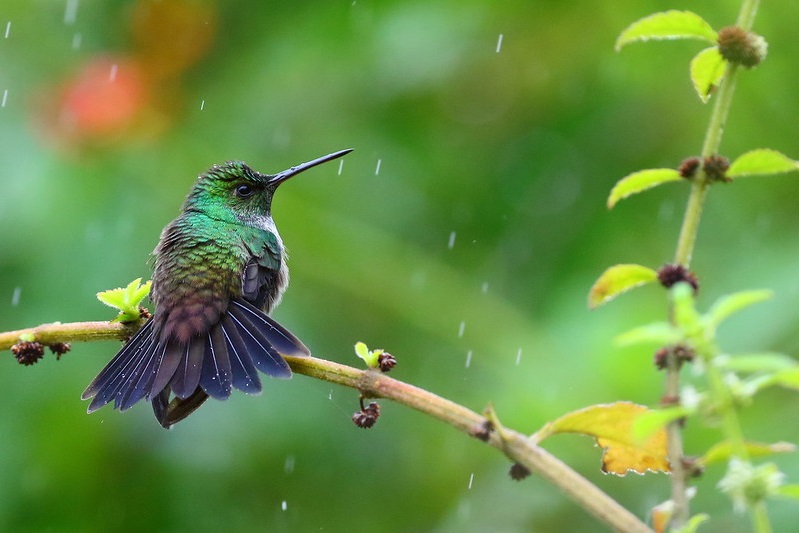 Hummingbirds are interesting creatures. Even though they’re small, they have a lot of energy and they love to fly. They spend most of their time in the air flitting from one flower to the next to feed. But what do they do when it rains? Do the raindrops bother them? To something so small, every drop of rain must feel like a missile shot.

Surprisingly, hummingbirds do fly in the rain, and they’re quite adept at it. Since hummingbirds have to eat every 15 minutes to sustain the energy needed for flight, this means they also feed in the rain.

How can hummingbirds fly in the rain?

While many people think that birds don’t like to fly in the rain, hummingbirds enjoy it!

As long as the wind is not too strong for them to overcome, they buzz about from feeder to flower just like they do when it’s sunny. Even though hummingbirds are very small, they’re also quite tough and are built to overcome dreary weather.

Hummingbirds are an amazing species of bird that have two extraordinary characteristics. They can make subtle adjustments to the position of their bodies and the angle of their wings mid-flight to avoid raindrops and gusts of wind, and they can also shake off any rain that does touch them so they don’t get water-logged.

While watching hummingbirds in the rain, you may have noticed that they don’t seem to care about the raindrops falling on them.

This is because they are relentless in their quest for food, and will continue to feed even if the weather conditions are not great. But how?

They continue to eat and fly around without any issues. So do they prefer the rain? I doubt that.

For instance, when you have feeders with overhead shelter (from the rain) and feeders directly in the rain, they tend to pick the ones with the overhead shelter. Can you blame them?

A research study found that hummingbirds can adjust their flight path and trajectory to navigate the varied conditions brought on by rainfall. Researchers observed hummingbirds closely and measured their reaction to rainfall in multiple levels of severity.

When the rain was light, hummingbirds barely made any adjustments to their normal patterns. In heavier conditions, they adjusted both their wing speed and the position of their bodies to account for it. This requires much more energy than normal and wears them out quickly, so it’s likely hummingbirds eat even more when it’s raining to keep their strength up.

These discoveries were made during a study on hummingbird flight that was published on July 18, 2012.

Another reason hummingbirds can continue to fly in the rain is that they don’t ever get water-logged and weighed down by raindrops. Hummingbirds have an incredible ability to shake so fast that all of the water flies off their bodies in roughly 0.1 seconds. What’s truly fascinating about this is that they can even do it mid-flight!

Imagine for a moment shaking your head left to right as fast as you can. (Don’t do it, you don’t want to give yourself a headache.) At the very least, you’re going to feel a little dizzy. Can you imagine doing that AND maintaining a perfect flight path?

Hummingbird feathers naturally repel water and are shaped by design to accommodate shaking off water and making split-second fight path adjustments. They’re not exactly waterproof, but they are coated in a natural oil the birds apply when they preen themselves.

Hummingbirds are equipped to handle the rain, and this doesn’t just include avoiding it. They’re also perfectly prepared to absorb the impact of any falling droplets that may hit them. If a raindrop makes contact, a hummingbird will adjust its flight pattern to move with the falling water and significantly lower the force of the impact.

They are also protected by the fact that they can afford to be pushed around a bit and keep flying afterward. The terminal velocity of any given raindrop might be strong enough to push them around in the air, but it doesn’t have nearly enough force to knock a hummingbird to the ground or into any solid object hard enough to hurt it.

How do hummingbirds handle severe weather?

When the skies are clouded by a hurricane or severe thunderstorm, you seek comfort and safety within the walls of your home. Hummingbirds, on the other hand, don’t like to nest in closed-off shelters like standard birdhouses.

Instead, they prefer to shelter in thick bushes, shrubs, or trees with plenty of foliage to provide a protective barrier. They have incredibly strong feet that can grip onto a twig or branch and hold tight until the storm passes. When winds are high, they’ve been observed huddling on the leeward side of trees to avoid the wind.

Sometimes when the weather is particularly fierce, hummingbirds will leave the familiar branches and come down to the ground to nestle against the side of a tree trunk. They’ll grip onto the bark with their feet the same way they would normally grasp branches.

Even in the eye of a hurricane, hummingbirds have been observed flocking to feeders to sip some nectar before the worst of the storm starts up again.

Hummingbirds Still Get Plenty To Eat In The Rain

The next time you’re sitting inside and hear the patter of rain against your window, look outside and see if you can catch your hummingbirds flying around. Now that you know exactly how they manage to fly through the barrage of water droplets, you can appreciate their abilities without any concern for their safety.

There’s one thing you can do to help your hummingbirds get through nasty weather. Once the storm is over, be sure to refill your hummingbird feeders and make sure the nozzles are clean and flowing freely. Flying in the rain does take significantly more energy, and your hummingbirds are going to be hungry!