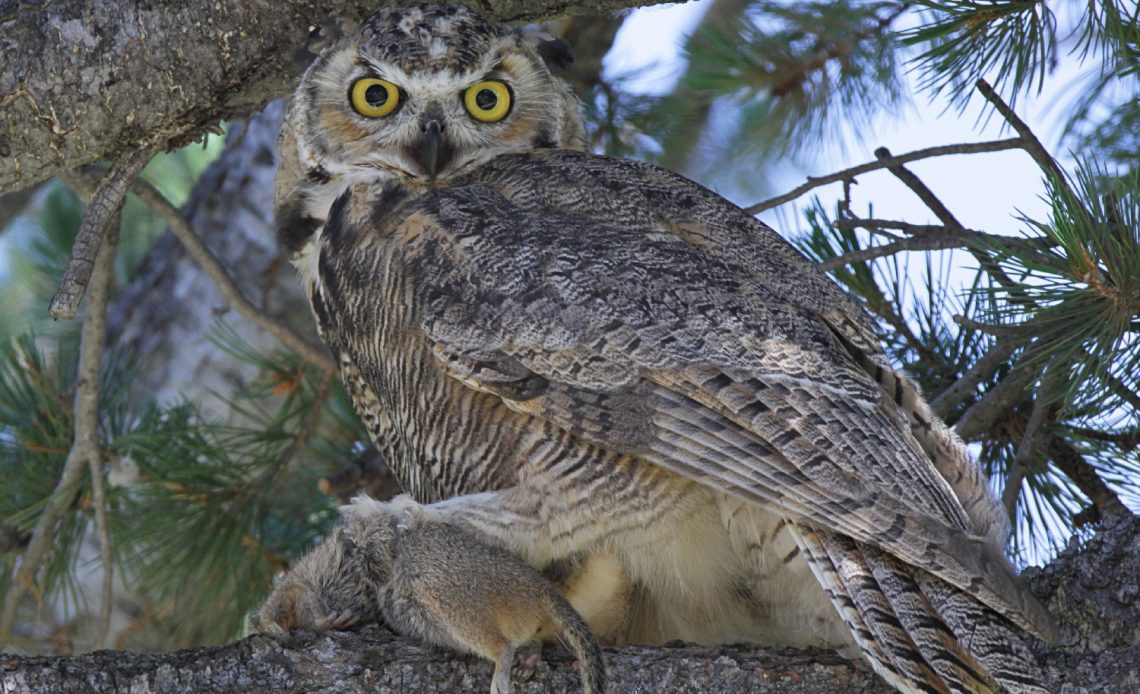 Most people think of rabbits and deer as being garden pests, but squirrels can wreak their fair share of havoc on a backyard, too. These bushy-tailed miscreants will dig up your flower beds, chew holes into your home’s siding, and destroy your outdoor furniture. If you want to take care of your squirrel problem and you want to do so naturally, then you may be wondering, do owls eat squirrels?

Yes, owls do eat squirrels. And, what’s more, owls are more likely to hang out in areas where squirrels are abundant. So if you’re fed up with the antics of your local squirrels, attracting more owls to your yard could be the solution.

Some people think owls are bad luck, but we think that’s a bunch of baloney. Owls are a good thing! They contribute to their local ecosystems by keeping the population levels of the animals they prey on in check.

See, owls are carnivorous. Because their diets are restricted to meat, they must hunt a variety of prey in order to fill their nutritional requirements, but they eat some animals more than others. So, even though owls do not eat squirrels exclusively, they still make up a good percentage of most owls’ diets.

What owls eat varies depending on what’s available to them regionally. Desert owls, like pygmy owls and tawny owls, tend to eat scorpions, small birds, lizards, and snakes, because that’s what’s around. Forest-dwelling owls, such as the great horned owl and the barred owl, tend to stalk other forest animals, like small raccoons and baby foxes.

Size is another factor. Small owls can’t tackle huge animals, so they hunt toads, lizards, mice, and other manageable prey. Large owls have more strength. It’s much easier for them to handle the rabbits, rats, and squirrels that smaller owls avoid.

Owls rely on their acute sense of hearing as well as their keen eyesight to track down their prey. Their senses are so well-developed that they can track gophers underground, and locate small rodents hidden in tall grass. If catching these hidden prey is possible for owls, then tracking squirrels out in the open is a cinch!

Even though most owls prefer to hunt at night, they will come out during the daylight hours if they get hungry. Squirrels are busy little bees during the daytime, so owls are sure to notice them. Clever owls will keep an eye on a squirrel, tracking it back to its nest so it can eat the babies.

Squirrels live in trees, but they spend a great portion of their time on the ground, foraging for insects, fruits, nuts, and seeds. Unfortunately for them, that’s when they’re most vulnerable to predators. Owls perch high in the treetops, and it’s easy for them to spot squirrels scurrying around from their lofty vantage point.

Additionally, owls have serrated feathers. This is something of a secret weapon for them because these feathers allow them to fly noiselessly as they track their prey. In one quick, quiet swooping action, an owl can snatch a squirrel right up from the ground before the squirrel even knows what hit it.

Which kinds of squirrels do owls eat?

Squirrels are a lot more cuddly than rats and mice, but they’re still considered rodents. And as rodents, they’re exactly the sort of prey that an owl keeps its eyes peeled for. Owls will eat any kind of squirrel. It doesn’t matter if it’s a tree squirrel or a ground squirrel, they have no preference. If an owl is hungry and thinks a squirrel will be an easy kill, it’ll go for it.

Owls are skilled predators. And large owls are much bigger than your average squirrels, which usually only weigh about a pound. Even if a squirrel were to put up a good fight, it’s not likely to escape an owl’s powerful claws.

These terrifying predatory birds are strong enough to take on a healthy squirrel, no sweat. But owls aren’t stupid. They want to hunt for prey that is easy to catch. Consequently, they’re far more likely to attack napping squirrels or squirrels that are sick and won’t struggle too much.

Owls with a nest full of babies will search for prey that’s easy for their owlets to eat. Small prey, like snakes, lizards, and baby squirrels are just perfect for this. So if an owl has kids back home, it may prioritize attacking smaller squirrels. But, beyond that, owls are happy to attack whichever squirrels cross their paths.

Poor squirrels! Owls aren’t the only raptors who chase these little fellas down. Hawks, eagles, falcons, and osprey will also attack squirrels if they get the chance. Other birds may snack on squirrels, too, including herons, magpies, and ravens.

And birds aren’t the only predators that squirrels have to worry about. Wolves, coyotes, foxes, and even domestic dogs will hunt down squirrels. Cougars, bobcats, and housecats enjoy stalking squirrels as well.

The list of predators who will prey on squirrels goes on: alligators, badgers, raccoons, snakes, and possums will all feed on squirrels. Oh, and squirrels have been known to eat other squirrels. Sheesh, it’s no wonder these little mammals have such a short lifespan. It seems like everybody is out to get them! Fortunately, in spite of their many predators, squirrels can usually reproduce quickly enough to avoid “endangered species” status.

Another threat to a squirrel’s safety is the use of rodent poison. Squirrels will feed on the toxic pellets meant to kill rats and mice, and succumb to their ill effects soon afterward. Squirrels sometimes eat rats and mice that have been poisoned and die from secondhand ingestion of these lethal substances. On top of that, many squirrels like to run right out in front of drivers on busy roadways, and, well… you know.

How can you use owls to eliminate your squirrel problem?

If you want to team up with the owls in order to reduce your local squirrel population, you’re in luck. There are several highly-effective ways of attracting more owls to your backyard space. All it takes is a little careful planning, and pretty soon you’ll have your squirrel problem under control.

The best way to attract owls is by setting up some nesting boxes. One or two should do the trick. You can find these boxes at local feed stores or online retailers. If you’re good with power tools, you can build your own nesting box in an hour or so.

Arranging these boxes in wooded areas on your property will catch your local owls’ attention. If they think your property is a safe place to raise their young, they’ll set up shop there. And once you’ve got a family of owls living next door, you can say goodbye to the squirrels.

Another way to attract owls is by keeping your yard as calm and quiet as possible. Pick up any bird feeders. Owls aren’t too sociable. They don’t like all the commotion that smaller birds make when they’re eating. Some larger birds, like crows and jays, will even attack an owl if they see it hanging out nearby, so owls generally steer clear of yards with bird feeders. Plus, bird feeders notoriously attract squirrels, so removing them from your property can help in two ways.

If you’re really dedicated to bringing owls to your backyard, and if you have enough room, consider digging a pond. Animals can’t survive very long without water. They’ll prioritize visiting a yard with a water source over a yard with food. Even though owls aren’t really waterfowl, ponds attract all sorts of animals that owls love to prey on — including squirrels.

So, do owls eat squirrels? You bet they do! Owls are your number one ally when it comes to keeping these pesky rodents out of your backyard. Install an owl nesting box today, and let them take care of your squirrel problem for you, so you can get back to enjoying your garden in peace.