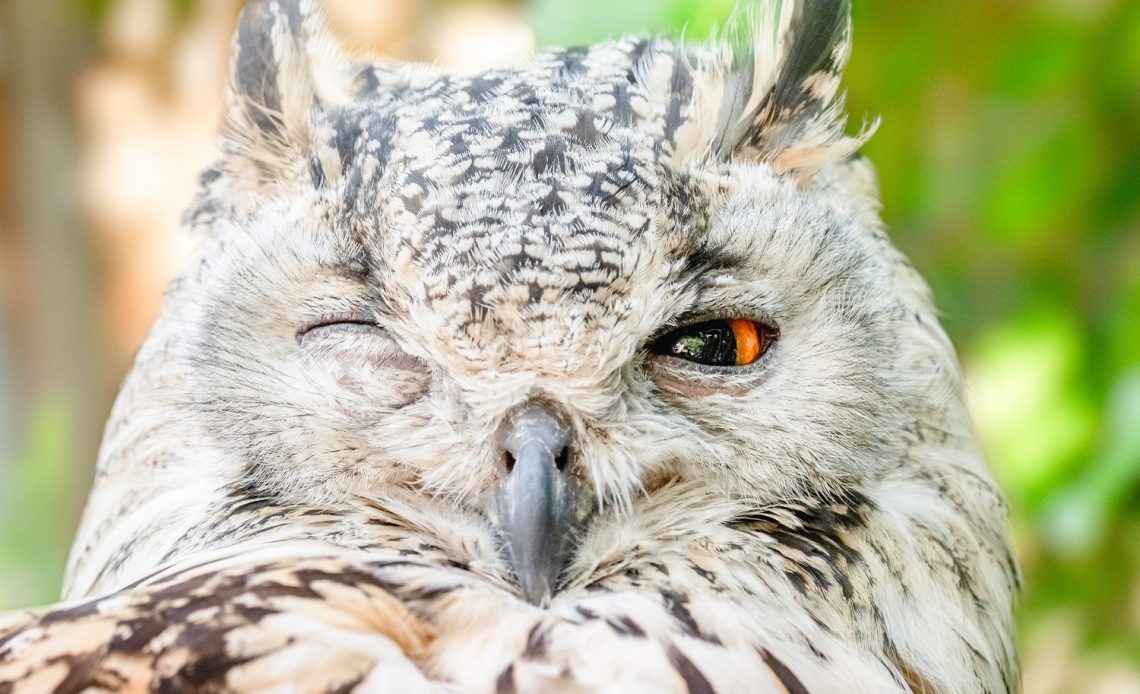 Owls are fascinating creatures and can seem fairly foreboding in their own way. Many different myths and legends regarding these hunting birds have mystified people for generations. Are owls bad luck, or is it all superstition?

Owls are believed to bring both good and bad luck. This varies from culture to culture, but having an owl visit your yard is a good sign and a great way to keep your garden free of unwanted pests.

Why are owls considered bad luck?

The stigma behind owls and bad luck revolves around their status as the ‘messenger of the witch’. For example, ancient Greek and Roman legend told of witches transforming into owls to spread black magic. Even long after this time, people have written about owls carrying messages for witches. It is simply superstition!

In some cultures, the owl is also seen as a harbinger of evil or even a symbol of death. Hopi culture, for example, even positions the owl as a god of the underworld. Dream analysis over the decades, too, suggests that seeing an owl in your nightmares may foretell death on the horizon.

Owls are highly mysterious creatures, and several species hunt under the cover of night, which can add to their image as animals to be fearful of. That said, an owl is never likely to carry away your children despite ancient legends and tales! For one, the average hunting owl simply won’t be strong enough!

There is a healthier balance regarding the type of luck owls may or may not bring to our lives in modern times. Some also believe that when and how an owl visits you may determine the luck you are about to face. For example, some believe that an owl landing on your roof may foretell your impending doom.

It’s important to take all superstitions and symbology with a pinch of salt. If an owl lands on your roof, it’s improbable you will die! Such omens are extremely important to many people and their cultures – so it is prudent to keep an open mind.

Owls aren’t literally evil – but legends state that they may be harbingers of bad karma. Owls are historically regarded as powerful and even evil creatures! This may be hard to believe when you see them up close – but given their careful hunting habits, people have referred to them as ‘spies of the night’. Over the centuries, people have even held owl feathers to act as talismans to stave away bad luck.

Other stories suggest that owls can communicate with ghosts, appearing around homes and buildings likely to be haunted.

There are even superstitions surrounding owl calls or hoots. Legends suggest it’s a curse to hear an owl hoot three times in succession.

On a practical basis, owls are not bad luck for your yard! They are crucial to our local ecosystems, and while they may seem mysterious and aloof, owls are never likely to bring you harm.

Conversely, many believe that owls bring good luck to people who hear or see them. In some eastern cultures, owls are depicted as wise and all-knowing – and knowledge is, by and large, seen as a virtue.

Beyond intelligence, owls are seen as lucky thanks to their connections with coming harvests. An owl visiting a garden or home, some believe, is a sign that bountiful harvests or great fortune are to come and that your hard work is about to start paying off.

It’s also thought that an owl’s presence can help you connect with your spiritual side. A visiting owl is thought to encourage progress or advise that prosperity is just around the corner. Some may even see a visiting owl as a moment for change – abandoning old ways and embracing new opportunities.

As much as owls can be seen as messengers for witches or evil spirits, they are also regarded as carriers of good omens from positive deities. This ties in with their positive reputations linking them to the unseen, spiritual world.

Much like how they can clear your garden and yard of unwanted vermin, people believe owls can help us clear our lives, environments, and even our minds. Despite their reputation for being harbingers of doom, an owl visit may mean that it’s time to remove negative influences from your life. That may mean adopting a more positive outlook or even surrounding yourself with people who can help you grow.

Owls receive much of this praise thanks to their ‘all-seeing’ nature – they have large eyes and can rotate their heads to face both ways. This suggests that owls can see beyond matters that people are blocked or obscured by.

Curiously, people view owls as both protectors and harbingers – but ultimately, it’s important to look at the practical benefits that owl visits will bring to your garden.

What does it mean if an owl visits you?

If an owl visits you in the morning, it’s believed to bring you good fortune for the rest of that day. The morning is an important time of day to receive blessings.

On a practical basis, an owl is likely visiting you if there’s plenty of opportunity for hunting and hiding. They will generally frequent thick, wooded areas with plenty of cover (to help provide subterfuge for hunts). If your garden has abundant, thick foliage, an owl may choose to perch on high to seek food from below.

Owls are more likely to visit you if you leave your yard to overgrow. Thicker grass, foliage, and uncut gardens are more likely to play host to various prey for local birds. Owls hunt for mice, rats, voles – and even smaller birds! If an owl is visiting you regularly, it’s a good sign that your yard is running wild with a host of flora and fauna – and that you’re doing a fantastic job.

Is it bad luck to see an owl during the day?

It’s not necessarily bad luck to see an owl during the day, but it is extremely rare given most species’ nocturnal hunting habits.

Concerning spirituality, seeing an owl during the daytime may mean that there is something you need to ‘wake up to’. Given that owl sightings are so infrequent in daylight hours, this event may be symbolic of a ‘sharp shock’. There may be something that’s escaping your attention or an area of your life that needs greater focus.

Owls appearing in the daytime may also signify that your life lacks balance or that a significant change is coming. This may be good or bad – regardless, its appearance in broad sunlight may be a good moment for enlightenment and reflection.

Others may assume that owls flying around in the daytime may be lost or lack focus – another moment of symbolism that we could compare with our own lives! Overall, owls are seen as mysterious and knowledgeable – meaning any appearances they make are likely to be noteworthy.

On the practical side, seeing an owl during the day is rare, but some species – such as the Northern Hawk Owl – actively hunt in the light. These birds are diurnal, which means they sleep at night and are active during the day.

There are even some owls that balance night and day hunting. These breeds, such as the Barred Owl, choose to hunt at dawn and dusk to avoid competition for prey. These are crepuscular species – though owls don’t always easily split into day and night hunters.

Finally, it may simply be that your local owls aren’t finding the prey they desire during traditional night hunts. Food availability and climate can also affect when owls are most active, meaning daylight visitations are never impossible, while still rare.

Why should I attract owls to my garden?

Owls help keep your rodent and vermin population at a minimum, and there’s no need for you to use harmful chemicals and poisons. By attracting owls to your yard, you can ensure that you’re keeping your garden environmentally friendly.

Keeping smaller animals out of your garden means that you may find it safer and easier to grow fruit and vegetable crops. Owls will help to take threats away from your plot. At the same time, owls may feed on animals you wish to keep welcoming to your yard – they can eat birds, lizards, and insects, too. Think carefully before setting up a plan to make your yard a haven for predator owls.

The only other drawback to attracting owls to your garden is the noise they may bring to your yard after dark. As discussed, some of us may find owl hooting a bad omen – but for millions of others, owl calls add to a wonderful atmosphere worth looking forward to, night after night. A hooting owl is happy, hunting, and keeping your garden free from pests.

Of course, you may wish to attract owls based on the good luck omens discussed above, too!

Will owls bring me bad luck?

Probably not – but your beliefs are your own! Owls provide a fantastic service to wild yards and wooded areas beyond.

Welcome an owl or two to your garden, and you can be sure your green space remains vermin-free for time to come.