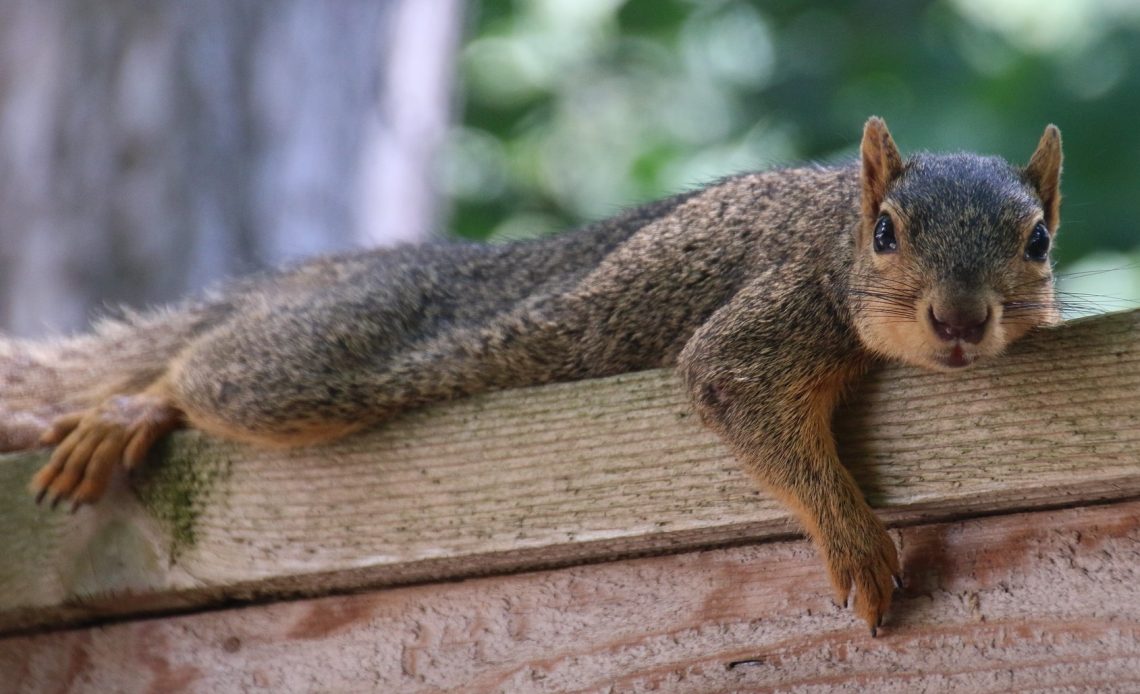 As we know, there are plenty of animals that use deception to protect themselves by laying motionless in front of their predators, thus ‘playing dead’. Opossums are usually the creatures that come to mind when we think of this, and physically, squirrels are rather similar. But, do squirrels play dead too?

No – squirrels never play dead – but a squirrel laying flat on the ground is not necessarily in any harm. In fact, there are a number of reasons why squirrels often lay on the ground in such a way.

Why do squirrels lie flat on the ground?

Squirrels often lie flat to help deter predators. While they are not playing dead, they are definitely being very sneaky! It’s a form of camouflage. A squirrel’s fur can match the color of certain trees and even occasionally the surrounding ground. In contrast, the whites of their chests stand out dramatically.

By lying flat on the ground, they hide their bright colors while letting their more muted tones blend into the environment, thus helping them disappear in their predators’ eyelines. Should they still be attacked, lying flat on the ground also helps to protect their vital organs! Squirrels are impressively adept at sussing out predator attacks in the first instance.

Secondly, squirrels also lie flat on the ground when they need to cool down. If the ground or surface beneath them is cooler than the air, a squirrel is likely going to plop down for a quick spell. If you are already attracting squirrels to your yard, it may well be that you’ve spotted this behavior already.

Finally, squirrels also lie flat on the ground when it is time for them to rest! However, they are more likely to adopt this pose in the comfort and safety of their trees. They are creatures of comfort – you likely won’t see a squirrel out in the rain any time soon, for example.

Can I touch a squirrel that is lying down?

As cute as they may look just lying there, and as inviting as their fur may be to stroke, you should never try to approach a squirrel lying down. They can be very docile creatures – however, when they are approached, they do react suddenly.

If they are lying on the floor, it is likely because they are resting, cooling down, or taking refuge from nearby predators. Therefore, if you approach them, even from the front, they could take it as a sign of aggression. In fact, you should be careful to not let any of your pets approach them when they are lying down, too. Squirrels are likely to scamper away much of the time, but it’s never a good idea to take this as a golden opportunity. They are, after all, wild animals.

They are also predators all on their own. For example, did you know that squirrels are known to eat birds’ eggs?

That being said, over time, you can earn a squirrel’s trust – they are not aggressive in nature. Many people enjoy trying for weeks or even months to get a squirrel to come to eat from their hand. It definitely can take some time, and you have to be very still and patient – however, when squirrels feel safe and have earned their trust, they will happily come back to you again and again.

In any case, the next time you come across a squirrel lying down, leave it be. Chances are that it is merely sunbathing or indeed hiding from those around it, so don’t give its secret away!