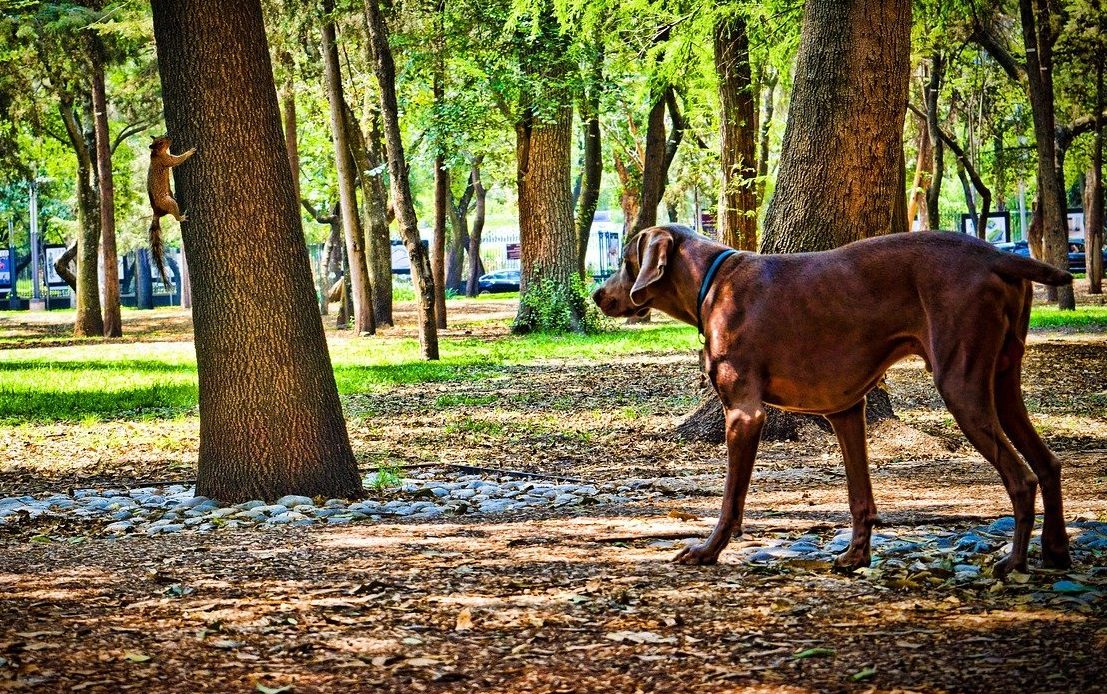 Dogs will chase nearly anything, but it is rare that something will try to get back at them – unless they are much larger! Certain cats may hiss, certain birds may mock, but what about squirrels?

Have you ever noticed your dog chasing away a squirrel or two? Once it has gotten away, you may have found that the squirrel appeared to be teasing the dog by throwing things at them or even running up and down, trying to get it to chase it. So, do squirrels tease dogs – or are we just seeing things?

Squirrels do, in fact, tease dogs! They are very intelligent and can be very playful – but what’s this cheeky behavior really all about?

Why do squirrels tease dogs?

Believe it or not, squirrels enjoy teasing dogs because it helps to relieve boredom – it’s a strange spin on the old game of tag! Squirrels goad dogs into chasing them – and at the same time, dogs can sometimes enjoy the thrill of the chase. Crucially, it’s a mutually beneficial moment where both animals choose to let off a bit of steam.

However, a squirrel may also appear as though it is teasing a dog when in actual fact, it is trying to defend itself. It could be that it has kits (or baby squirrels) in its nest, or a food reserve that it is building for the winter. If that is the case, then it will be doing its utmost to keep other creatures out, especially ones that could easily harm what is most dear to them. Squirrels aren’t afraid to show aggression if need be (and some studies suggest this can be down to urbanization).

The squirrel is impressively plucky – and while it will run away if it is under immediate threat, no studies exist to suggest that squirrels are actually afraid of dogs. Dogs can be considered predators in rare cases, but the squirrel is most likely keeping its eye out for wild mammals such as weasels, foxes, coyotes, and bobcats – not domesticated beasts.

Therefore, the relationship between squirrels and dogs can offer a bit of mutual fun – but things can turn a little risky if you let these creatures get too close to each other.

Should I let my dog play with squirrels?

It’s never a good idea to let your dog befriend squirrels, as fun as the chase might be. Ultimately, if the game goes too far, it could result in serious harm, or even death, for both animals.

As fast, smart, and capable as squirrels may seem, they are not invincible. One mistake could lead to a dog catching the squirrel and most likely killing it. It is not worth risking the squirrel getting hurt, no matter how confident it may seem.

Moreover, squirrels can carry serious diseases that could seriously harm your dog. Squirrels carry a variety of nasty parasites and fleas, and can also spread Lyme disease to your pet through tick infestation.

On top of this, dogs that end up killing and even eating squirrels may be at risk of serious gastrointestinal problems – or, at the very least, a stomach bug. These are, after all, wild animals – and your domesticated pet isn’t built to deal with the various hidden nasties that squirrels put up with.

Let’s also consider the fact that squirrels can be avid scratchers – causing deep cuts and wounds for your dog.

Therefore, as fantastic a video of your dog playing with squirrels might be to share online, it’s a habit you should do well to stop as soon as possible. You’re likely safe to let your dog roam a little more when it’s wet – squirrels hate the rain – but otherwise, it’s time to be vigilant.

How do I stop my dog from chasing squirrels?

If you notice your dog chasing after squirrels, the best thing to do is to deter them – either with favorite toys, high-value treats or by calling them to heel. It may also be good to keep your dog on a leash if you walk them around a wooded habitat likely replete with squirrels.

Keeping them on a leash around known squirrel habitats is also a good idea in case there are grounded squirrels in the area. Some squirrels lay on the ground as a predator deterrent, for example!

Squeaky toys are ideal for deterring attention – they are designed to squeak so that they mimic animal noises, which could satisfy your pup’s need to chase.

Taming your dog’s prey drive is the best course of action to take – and a good plan to help prevent your pup from attacking any other animals you may be welcoming into your yard. To stimulate or tame the prey drive, you could encourage your dog to hunt for hidden treats or snacks, and ensure that you have a strong recall.

Dogs are both obedient and playful – meaning that the sight of a cheeky squirrel might just encourage them to play naughty. Don’t rise to it – and leave those squirrels well alone. It’s great to attract squirrels to your back garden – but letting them frolic around with your pets is a recipe for disaster.