7 Yarrow Companion Plants (and 2 to Avoid) 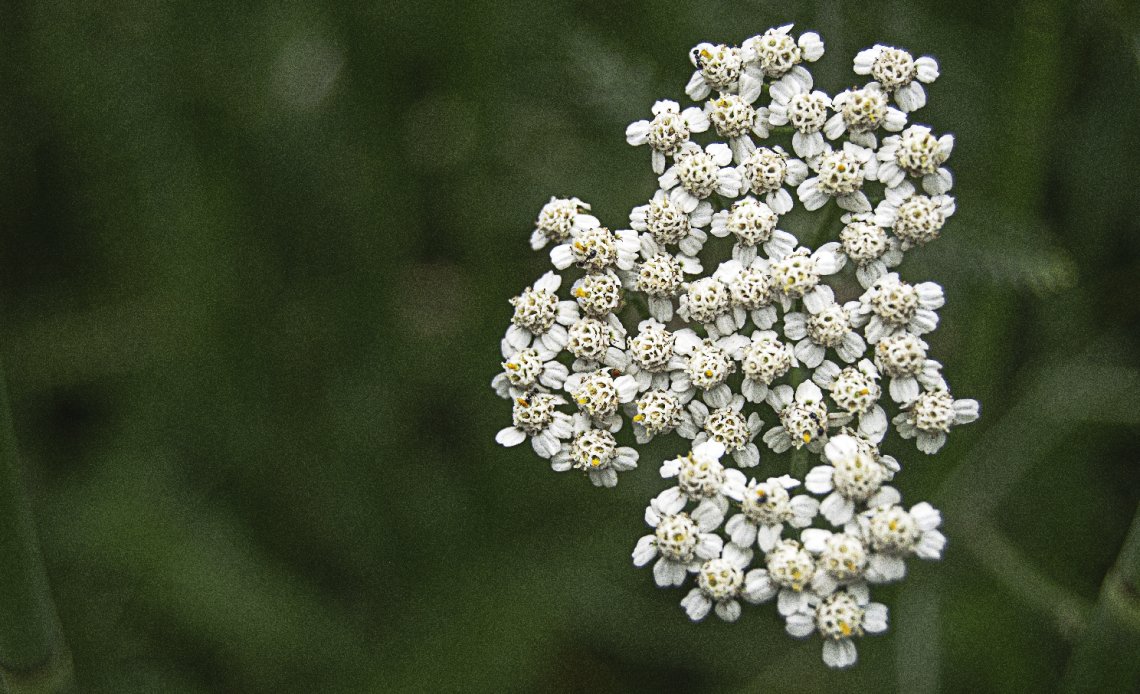 Yarrow – a weed to some and a bright, colorful herb to others – is great for attracting pollinators such as butterflies to your garden. Paired with other plants and herbs, this fast-growing garden asset can double your insect appeal. Thankfully, there are plenty of yarrow companion plants to pick from!

Yarrow grows well as a companion plant alongside herbs such as oregano and rosemary, most brassica vegetables, and nightshades such as eggplant. While yarrow may be considered highly invasive and competitive, it can bring a wealth of pairing benefits when carefully balanced.

Why should I grow companion plants with yarrow?

Yarrow’s main benefit as a companion plant lies in its pollinator appeal. This fast-growing perennial is extremely hardy against heat and drought, which can keep bees and butterflies fluttering around weaker flowers that would otherwise cease appealing to such visitors.

Yarrow will also attract insects to your plots and crops in the shape of ladybugs and hoverflies – both of which are fantastic for getting rid of destructive pests such as aphids. Deeper down, yarrow is superb at resourcing nutrients and creating a dense, healthy growing medium. Its intense root system will stretch out in search of magnesium, potassium, and more – helping to improve the nutrition network for other plants and flowers sharing the same bed or compost.

Yarrow’s also famous for deterring many common pests, and its oil is frequently used in natural insecticides and therapeutic tinctures. It’s an asset in helping to repel mosquitoes, for example.

Despite the benefits of growing yarrow as a companion plant, this flower is infamous for its over-competitive nature. Slow-growing or laid-back plants and vegetables may be overwhelmed by yarrow’s go-getter growth strategy! It’s advisable – if you do wish to give growing yarrow as a companion a try – that you do so sparingly, or at least choose plants that aren’t likely to suffer from the extra competition.

Vigilant gardeners can easily curtail yarrow so that it knows its place – while providing several plants and crops with healthy nutrients and pest control. In some cases, yarrow will benefit from protection in return, too! Here are some crucial companion plants for yarrow to consider.

Delicate, at-risk vegetables such as cauliflower, broccoli, and cabbage – members of the brassica family – are on the menu for many hungry insects. Growing yarrow close to brassicas will help keep your green crops growing strong and healthy while welcoming pollinators and predators.

Yarrow may also help to cool down brassicas growing in hot spots – by providing helpful shade. Keep a close eye on your yarrow to ensure it doesn’t out-compete your brassicas for space.

Nightshades such as eggplant and tomatoes sadly fall prey to aphids and other fruit-hunting insects – yarrow will help to eliminate these beasts on sight. If your yarrow doesn’t deter these minibeasts outright, they’ll welcome predatory wasps to ensure your nightshades grow to full potential.

Yarrow’s health-boosting benefits deep into the soil can also help to provide larger, juicer yields from sweet nightshades, making this a doubly impressive relationship. Nightshades may get easily overwhelmed by yarrow’s growth patterns, so be sure to prune regularly.

While yarrow may not grow as tall as some of the apple trees you may have in your yard, they’ll help stimulate their growth and fruit production by introducing waves of pollinators into your garden. Surviving through periods of arid weather, the ever-growing yarrow will continue to welcome bees, wasps, and butterflies well into weeks when your trees may not be doing so healthily.

You can also expect yarrow to repel many pests that enjoy eating through the fruit in your garden – strawberry plants, in particular, will benefit from wasps feasting on hungry aphids and whiteflies. Pairing yarrow with bushes and shrubs that bear fruit will also help them produce healthier yields (thanks to the nutrient boost).

Rosemary’s fantastic reputation as a pest controller will work wonderfully in tandem with yarrow’s tenacious growth patterns and bug deterrence. Like yarrow, rosemary produces oil that’s commonly used to help repel bugs outside of the garden.

Working together, rosemary and yarrow are ideal to be grown on a perimeter, around sensitive plants and vegetables such as brassicas that might otherwise struggle with flying insects, slugs, and worms.

Much like rosemary, the benefit of growing oregano with yarrow lies in their protective partnership. Grown with yarrow, oregano can help to provide immense soil coverage and mulch, helping to offer dual shade to plants that might otherwise suffer in the full sun and arid conditions.

It’s a good idea to grow oregano alongside yarrow and rosemary for an even stronger pest perimeter – and to ensure your shade-loving vegetables get the cool they deserve. In return, oregano benefits massively from yarrow’s nutrient-boosting roots. They shouldn’t compete too harshly with one another, but as always with yarrow, keep a vigilant eye.

Alliums such as garlic are brilliant at warding off all kinds of pests, thanks to their strong fragrances. Yarrow, too, provides a strong odor that many insects can find confusing – matching yarrow with garlic, in particular, is ideal if there’s a patch in your yard where your vegetables or flowers are getting eaten away.

Garlic is recommended for growing with yarrow largely thanks to the latter’s nutrient boosts. However, take caution if you’re considering growing other alliums, such as onion plants. Onion is particularly highly competitive for soil nutrients and space – with complex roots that happily force through anything in their path. Combined with yarrow’s ever-growing roots, this is likely to be a recipe for disaster.

Garlic is perhaps the most laid back of all alliums – though not to the extent where yarrow will frequently overcrowd it.

Lavender is a great herb for growing with many plants if you’re keen on attracting helpful wildlife. Strong-smelling, easy-going lavender appeals to bees, butterflies, and hummingbirds, and with yarrow growing alongside, you can expect double the pollinator power. Planting a clutch of yarrow and lavender together is a great idea if you want to grow ‘wingmen’ to help encourage visitors to pollinate timid plants. Double-flowered roses, for example, could benefit from a lavender-yarrow power-up.

Both lavender and yarrow need little encouragement to grow and will happily persist in sunny, dry conditions, making them the ideal support network for flowers and plants struggling in warmer months.

What not to grow with yarrow in your garden

Given yarrow’s notoriety as a highly competitive plant, it’s reasonable to be wary of growing it alongside any crops in your garden! Here are a few plants you should always keep yarrow as far away from as possible.

As much as your cucumber crop could stand to benefit from yarrow’s pest control and nutrient boosters, it’s likely to die off quickly if yarrow is left to propagate. Yarrow is infamous for carrying diseases such as powdery mildew, which, while unlikely to affect all plants in your garden, can prove fatal to cucumbers – and quickly.

A word of warning – powdery mildew from yarrow can also devastate crops such as melons and pumpkins – and it’s often very quick to spread. It’s best to keep these growths far from anywhere yarrow’s likely to pollinate and spread.

The coneflower, or echinacea, is one of several flowers that can get easily overwhelmed by the fervent growth patterns of wild yarrow. Yarrow may out-compete coneflowers for sunlight, which could lead to fewer pollinator visitors (and stunted growth for your echinacea).

It’s tempting to grow lavender and yarrow with coneflowers as nutritional and pollination benefits may look great on paper – while lavender is a superb companion to the coneflower, the yarrow is far from a mutual friend.

Is it safe to grow yarrow as a companion plant?

Yarrow is safe to grow as a companion plant for many species providing you are careful to control its growth. This may mean mowing over or trimming back your flowers regularly in peak season – which can be a tedious and repetitive task. It is, unfortunately, not a plant to cultivate if you’re looking for a laid-back garden – yarrow needs work.

One way to help plants benefit from yarrow’s pest control and nutrient boosts may be to grow a select number of specimens in proximity and to stay vigilant for pollination. It may only take days for yarrow to start taking over your flowerbed – so be ready with your pruners if you want your crops to flourish.

When carefully curated, yarrow is a natural marvel that rightfully earns its nickname of ‘garden physician’. While extremely eager to grow and persist, yarrow will help to deter pests, introduce helpful predators, attract pollinators and add nutrients to the soil. It’s little wonder why wild yard owners often let it grow wild – but be careful, as it may do more harm than good with total freedom.

Why not pair yarrow with garlic or with a rosemary and oregano combo to help protect vulnerable fruit and nightshades in your plot?