12 Rosemary Companion Plants To Grow – And What To Avoid 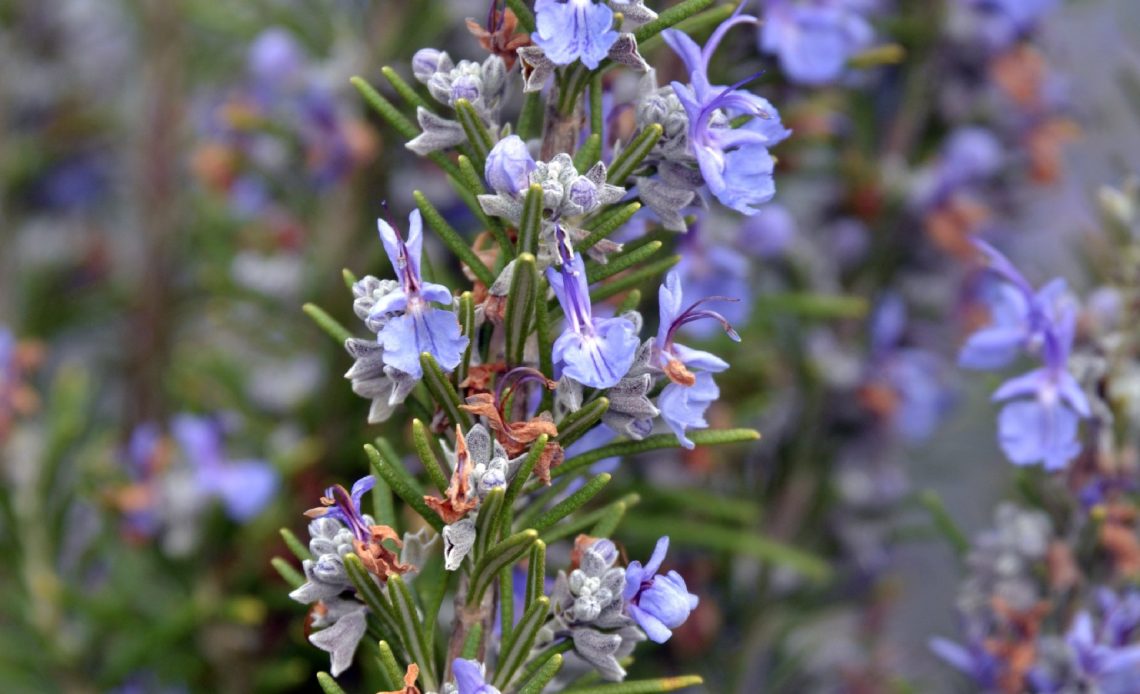 Rosemary is a delicious home-grown herb – and its sweet and fragrant smell makes it an excellent pollinator attractor. Paired with the right plants, it’s also immensely useful in helping to protect weaker garden specimens. Many rosemary companion plants will happily thrive in similar conditions.

Lavender, marigolds, and alyssum are all fantastic examples of rosemary companions. This is a highly versatile herb that can help deter hungry pests and attract beneficial visitors – but there are also a few plants that can grow alongside.

Why grow companion plants with rosemary?

Companion planting is highly recommended to keep weaker plants, vegetables, and herbs protected from invasive pests. Aphids, beetles, and some worm species can ravage defenseless crops – and thankfully, rosemary is fantastic at deterring many species. In some cases, rosemary can even help to improve the flavor of edible crops – such as sage.

Rosemary’s status as a great companion plant stems from its strong-scented oils. In particular, you’ll find that egg-laying moths and loopers are deterred from invading cabbages and brassicas if rosemary is producing oil close by. The herb is also fantastic for helping to keep slugs, beetles, and flies away from vegetables.

Rosemary, too, may fall prey to common pests occasionally – which is why it’s worth looking for strong-smelling plants and herbs (such as alliums and certain types of mint) to ensure your rosemary keeps growing strongly.

What to look for in rosemary companion plants

Rosemary needs well-draining soil, plenty of sunlight, and watering only about once a week – ideally, the best companion plants will have similar demands. Rosemary also does best in warmer weather and will need to be brought in in the winter if you live in a cold area. Generally, it prefers a slightly acidic soil pH between 6 and 7, and it’ll fare well with other plants that dislike heavy moisture.

Rosemary won’t always work well as a companion plant alongside species that require a lot of space. Like dill, this herb will propagate wildly and spread out to capture as much sun as possible – and in some cases, rosemary can attract mildew, which will prove fatal to some vegetables growing in allotments and garden plots.

This herb is generally easy to care for in full sun and with scant watering, meaning it’s worthwhile looking for other unproblematic plants that aren’t likely to compete for sun and nutrients.

Plants to grow alongside rosemary

The following plants highly benefit from rosemary’s companionship – whether through pest deterrence, mutual protection, growth stimulus, or a combination.

In the open sun, butterflies, bees, and hummingbirds are particularly big fans of lavender – rosemary’s strong fragrance will double the pollinator interest. Rosemary alone may not be the most popular plant in the garden, meaning it’s worth pairing the two so that lavender can act as ‘wingman’.

Deer dislike eating lavender and rosemary – meaning you can team the two herbs up to protect your yard from unwanted visitors.

Some species of the lavender herb, particularly English lavender, are adept at handling harsh winters – on the other hand, rosemary likes it warm! It may therefore be prudent to keep this pair in a container or pot that you can easily move into warmer spots.

Sweet and spicy, marjoram is a popular herb that will help to bring out flavors in companion plants – particularly beneficial for rosemary, which can even benefit from growth stimulation in the same soil.

Marjoram and rosemary have similar tastes in soil pH, with the former preferring a neutral blend (around seven on the scale). Planting marjoram alongside rosemary will also encourage double visitation from bees and butterflies.

Caution – marjoram can proliferate and take over a flower bed with little encouragement.

Pairing some herbs with carrots – such as dill – can be tricky, thanks to cross-pollination. However, rosemary is less aggressive in this regard and provides a smokescreen to confuse potential vegetable predators. Specifically, rosemary bushes can produce a fragrance that covers the relatively mild scent of carrots, which would otherwise appeal to carrot flies.

Cuttings of rosemary alone can provide enough of a scent mask to deter minibeasts. This pairing also makes for a tasty harvest, with the herb helping to bring out the vegetable flavor in many cases. Parsnips benefit from rosemary companionship for the same reasons.

Both rosemary and marigold have fantastic insect repelling powers that are ideal for controlling areas where you grow sensitive fruit and vegetables. This is a duo you’ll want to have on your side if you frequently lose crops to aphids and whitefly, for example.

Take caution – as marigolds will initially require a little more moisture than rosemary to settle into the soil.

Sage is a fantastic rosemary companion, thanks to the amazing fragrance you can create by planting the two herbs alongside each other – which can help deter hungry pests and add a nice musk to your garden.

Sage can help to bring out flavor in many plants it grows alongside, rosemary included. Salvia is typically highly rich in nectar, meaning it’s reliably hunted by bees and butterflies, boosting pollinator crowds around your rosemary.

Chives is an allium, meaning it’s a close relative of onion and garlic – thus, it too gives off a strong scent that deters common garden pests such as aphids and carrot flies. The former, in particular, is typically found munching on rosemary, meaning planting with chives adds an extra layer of security.

Chives will also help to keep soil for companion plants rich in nutrients and are commonly used as a natural, growing mulch. Planting alongside rosemary can help your herbs grow stronger for longer.

Additionally, chives are ideal for ground coverage, helping to fill gaps between flowers and herbs. Like rosemary, deer are also deterred by chives. To keep these visitors out of your yard, grow the plants together for double the protection.

Despite its strong fragrance and ability to protect weaker plants, rosemary is still at risk from some worms (such as the cabbage variety) – which thyme can naturally deter thanks to its unique smell.

The benefits are also mutual, as rosemary can help repel insects that otherwise find thyme particularly tasty. It’s easy to grow rosemary and thyme together, as both will demand plenty of sunshine and scant watering.

Rosemary and thyme work well together both in the herb garden and on the dinner plate, often proving popular as stuffing.

Catnip is a perennial mint that’s popular with gardeners for its pest-repellent properties. While rosemary is fairly hardy, it will suffer from beetle and thrip attacks. Catnip naturally deters these minibeasts alongside cockroaches and termites.

Catnip is also great for attracting lacewings, reducing the aphid population swarming around your rosemary. The plant is also adept at attracting various species of bees and butterflies during the growing season and is incredibly drought-resistant.

One issue you may face with catnip is that it can overgrow some herbs, such as parsley. In most cases, it’s advisable to try and avoid growing mint species with rosemary as they will fiercely compete for nutrients and sunlight – so it’s a good idea to plant them separately in pots but close enough that they are still able to benefit from each other.

Cauliflower is a popular garden vegetable, but one that’s at serious risk of getting eaten by pests such as moths – several species will lay larvae in and around the crop, leading to poor harvests. Rosemary’s oil will produce a deterring scent that can mask your cauliflowers and confuse those pests likely to breed in your crops.

Rosemary is unlikely to crowd or compete with cauliflower, and you can easily grow a protective bush or hedge to surround your plot. For the same protection, consider growing rosemary around other brassicas, such as radishes, broccoli, kale, and turnips.

Alyssum plants and rosemary team up to create a fantastic pollinator plot, meaning you can easily welcome different species of bees while fighting back aphids.

Pairing rosemary with alyssum means you effectively have a natural pesticide machine working on your behalf, useful for protecting weaker plants and vegetables elsewhere in the plot. They will also both thrive in plenty of sunlight and won’t need much water over the growing season.

Oregano is a fascinating rosemary companion because it grows sideways rather than upwards. This means that while it will remain low on the ground, it will provide a natural mulch or ground coverage for any plants, herbs, or flowers sprouting up in between. Rosemary can shelter oregano where necessary, too.

The partnership between rosemary and oregano in your herb garden is likely to benefit other plants – oregano will help to shade weaker specimens from the sun, while the rosemary will deter invasive, destructive pests. They also help to provide a tasty crop you can harvest together in one clutch for your spice rack.

Strawberries, much like rosemary, love basking in the sunlight and well-draining soil. This fruit is often highly influenced by other plants in flavor and smell – growing rosemary can help bring out a richer taste when harvesting.

Deer looking for fruit to nibble on will also find rosemary highly deterring. Grow the herb in a perimeter around your strawberry plants for protection during the warmer growing months.

Rosemary is fantastic at repelling pests and bringing out strong flavors in popular crops – but some relationships may result in mutual rot or over-competition. You should avoid growing the following plants with rosemary at all costs.

While it makes sense to try and grow herbs together, basil and rosemary are completely incompatible, and what’s more, neither reap any benefits from companionship. Basil relies on moisture, while rosemary demands arid soil conditions. While it may be possible to carefully balance a growing relationship, there are no provable reasons why it’s worth the effort.

Rosemary may be one of the hardiest and most pest-resistant herbs you can grow in your garden – but it’s highly susceptible to rotting and mildew, both of which pumpkins suffer from.

Mildew growing rampant on pumpkins can easily spread to rosemary growing in the same plot, which is always likely to be a major risk to your herbs’ health.

Additionally, while rosemary can frequently bring out flavors in many vegetables and plants, any benefits from a relationship with cucumber are non-existent.

Common mint and rosemary make highly competitive neighbors and are more likely to try and outpace each other than to provide any mutual growing or pollinating benefits. While it’s unlikely mint or rosemary will cause serious detriment, growing them together in the same container or bed may restrict other plants and flowers from reaching full strength.

As noted, catnip or catmint is the exception to the rule, as it’s great for deterring pests that rosemary hates.

Is it worth growing companion plants with rosemary?

Absolutely – rosemary is a popular herb for its culinary potential and pest-deterrent properties. It’s not an infallible plant, which is why you should consider growing a few mutually beneficial friends alongside.

This herb is unproblematic to grow and works great as a pollinator and a protector against deer visitation. Its growth behavior may stunt or over-compete with several species, however, so make sure to grow it alongside plants that can keep up the pace. Why not consider pairing up companions with other herbs such as lavender and oregano, too?