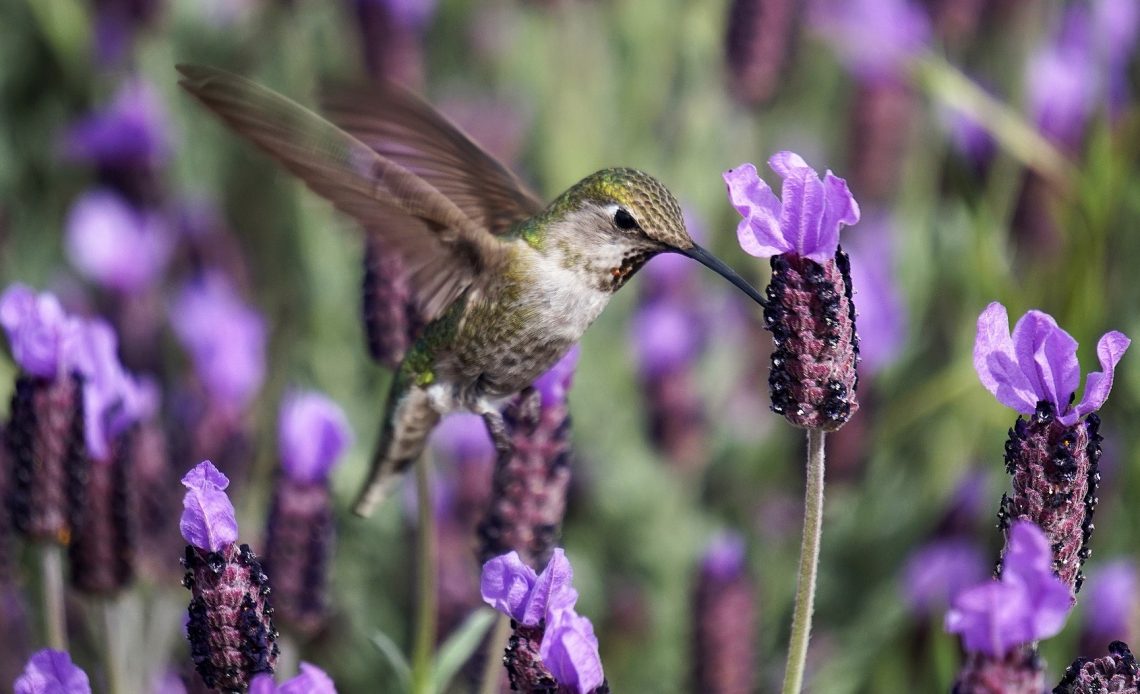 Hummingbirds are naturally attracted to lavender. It is a very popular plant to keep in gardens and yards because it is relatively easy to grow and boasts a long list of benefits, including the fact that it is full of the nectar that hummingbirds love!

The clue is in the color, the smell, and the shape. Lavender, in many ways, is the perfect plant for multiple pollinators, including hummingbirds. Lavender flowers are brightly colored, normally arriving in purples, blues, and even whites.

Then, as you will notice, their flowers have tubular shapes, which are perfect for the shape of the hummingbird’s beak. The flowers also grow vertically, and they tend to propagate in large bushes, meaning that there is normally a big pick of blooms for pollinators to dip in and out of.

Lavender also happens to be absolutely ripe for nectar – and abundant nectar is fantastic for attracting hummingbirds to your yard.

However, there are plenty of creatures that hate lavender – and in many ways, it makes for a fantastic insect repellent. The strong smell deters wasps and mosquitos while welcoming butterflies and other useful insects – meaning it will certainly bring in some pollinators while warding others away.

Lavender is also very popular with people – not just gardeners – thanks to its sweet smell. In fact, lavender oil is popularly used to help people sleep.

Is lavender the hummingbird’s favorite flower?

It’s impossible to say which flowers the average hummingbird favors over any other – but lavender is definitely a top choice. Hummingbirds love zinnias, too – in fact, it’s likely difficult to find colorful, fragrant blooms that hummingbirds don’t like.

How to grow lavender

Choose an area in your garden that is in full sunlight, and that has well-drained soil. It is best to start planting it in spring or at the beginning of summer. Remember to water the plants well when it has first been planted. Once it has grown in your garden, it will not need to be frequently watered as this could drown the plant.

Deadhead the flowers, but do not be afraid to trim your lavender every now and then to use some of the clippings. Beyond that, lavender does not need trimming much and is very easy to maintain without much-concerted effort.

Where does lavender grow in the US?

The best states for growing lavender are Hawaii, New Mexico, Arizona, California, and Texas. As previously stated, lavender does not need an abundance of moisture, but it does need plenty of sunlight and healthy soil. On the whole, lavender grows abundantly in Europe, but we get a little bit of purple power in the states!

Of all the best lavender-growing states in the US, Texas seems to be the best spot for cultivating big, plentiful bushes full of lavender.

In terms of USDA zones, you’re most likely to see lavender growing best in zones five through nine. You can easily pot lavender species such as Munstead and Hidcote, but for a real splash of lavender across your backyard, you’re going to do best planting bushes of it in your flower beds.

However, one thing to keep in mind is that lavender has a very strong smell, meaning that it can overpower other fragrant blooms in your garden. As lavender tends to propagate very strongly, other plants may also struggle to make much of an impact!

By all means, grow a mess of lavender in your yard if you want to keep hummingbirds visiting time and again – and if you want to attract butterflies to your garden, too!