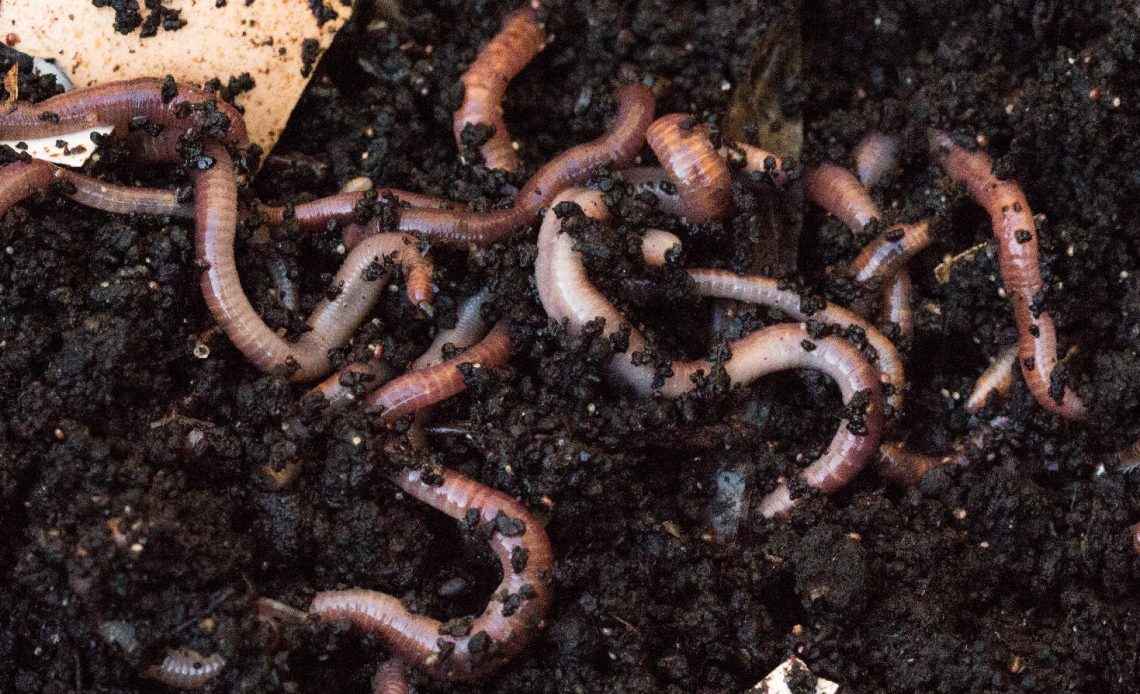 We usually consider garden worms as positive for our plants and soil. Earthworms, for example, have had a lot of good publicity as guardians of soil quality. Many clean up the decaying matter and churn up nutrients for our plants! Conversely, there are bad worms for garden soil, too.

Jumping worms, nematodes, tiger worms, and cutworms are all species that can adversely affect many common plants, sometimes eating away at roots and stems. Let’s look at a few worm species you need to be wary of and how to get rid of them.

The Amynthas agrestis gets its name as it seems to jump whenever disturbed. Left alone, these worms move through terrain by moving in a snake-like fashion. They are generally found in the upper levels of soil – unusually as these worms do not burrow!

Jumping worms are commonly brown with a striking ‘clitellum’ (the creamy, white band around their bodies). They can thrive under hot and cold temperatures, and between late summer and early fall, they form cocoons.

These invasive worms can be destructive as they can remove nutrients from topsoil. This impacts the development of plants – by changing the chemistry of the soil and depleting valuable nutrients. Because of this, plants and trees, especially saplings, may take longer to grow.

The easiest way to remove jumping worms from your soil is to physically pick out any adults you find while gardening. If you want to bring these minibeasts out of the ground quicker, try mixing around a third of mustard seed (ground) into a gallon of water and pour it over your soil.

Land flatworms are among the most invasive specimens you’ll find in your garden, and there are over 900 different species! This hungry predator eats snails and earthworms and is known to attack and eat creatures 100 times larger than itself!

They’re bad for your garden soil as their invasive predatory behavior can deplete useful worms and insects you actually want to welcome. What’s more, these relentless critters can reduce soil quality and may even minimize pollination in your garden.

Land flatworms are, as the name suggests, flatter than most species, and aren’t segmented. They’re dark in color and look a little like a slimy ribbon – growing up to 20 inches long. You’ll find these worms in cool, moist, shaded areas.

The best way to remove land flatworms from your garden is to kill them directly – with hot water or salt is best (and to avoid chemicals). That said, using citrus oil and vinegar can help to deter these pests as well.

Grub worms are beetle larvae – these tiny, creamy, white wrigglers arise in soil where adult beetles have laid their eggs. You’ll frequently find these worms curled up, with darker spots towards either tip, rarely longer than three inches.

These worms are highly destructive if left to proliferate in garden beds and pots. While they will only typically stay in their larval stage for up to six weeks, grub worms will get busy destroying rich foliage and, in some cases, eat through plants to the point of destruction.

Getting rid of grub worms isn’t always easy as they are so small. The best action is to replace your topsoil completely if your bed or pot is overrun. Otherwise, grub worms make light snacks for visiting birds and frogs – simply make your garden more attractive to larger species, and the problem may take care of itself.

A particular nuisance for North American gardens, tiger worms live for approximately a month – but, during this time, they tunnel along the roots of plants and cause significant damage. The tiger worm will also proliferate wildly, producing scores of offspring in its relatively short life.

Unsurprisingly, tiger worms are striped – and when not camouflaged due to their brown coloring, are generally easy to spot. The Eisenia fetida is typically classed as a type of earthworm.

Tiger worms aren’t all bad – if left to breed with abandon, they can cause mass damage, but they can help to keep the soil rich in nutrients. They’re commonly found in vermicomposting bins, too, as they are famously hungry for decaying matter as well as living greenery.

The best way to get rid of tiger worms is simply to remove them by hand from spots you find them burrowing up from – being careful to look for offspring. Where possible, consider transferring them to your own specific compost bin, rather than letting them eat away at healthy plants.

Pot worms thrive in moist compost – and while they’re not as destructive as some of the worms on this list, these white wigglers can eat away at your plants and out-compete other, more beneficial beasties. Much like tiger worms, they can be beneficial – in that they can aerate your soil. They are commonly confused alongside other white worms in your soil.

Pot worms are sometimes confused with grub worms, though this species generally looks like tiny pieces of thread crawling around your soil. Unlike other species in this guide, you should only really remove pot worms if they are starting to overpopulate your bed or container.

Pot worms dislike alkaline soil, meaning it may be prudent to add organic mulch to change the pH. Alternatively, consider removing the topsoil if populations are out of control and using neem oil as a deterrent.

Contrary to popular belief, cutworms aren’t worms at all but are invasive, destructive larvae that grow into cutworm moths. This specimen is commonly spotted in garden soil around springtime, fervently feeding on plant life until it pupates into its adult form in the early summer. You may be left fending off cutworms for up to two months.

Thankfully, these hungry minibeasts are commonly feasted upon by various useful garden visitors. Pollinators such as wasps, for example, are known predators of the cutworm in its larval stage, with birds and spiders also feeding on them if the opportunity arises.

You’ll normally find cutworms eating away at decaying matter, which can be useful in composting. They’re generally black to brown colored and have spotted marks, with the variegated species boasting yellow markings.

Nematodes of varying species – the root-knot in particular – can prove a nightmare for gardeners thanks to their fast proliferation and taste for plant roots. The root-knot nematode is particularly irritating as its feeding habits lead to root swelling, which in turn prevents plants from being able to soak up water and nutrients. In turn, an untreated nematode problem can lead to mass plant death.

These worms are tough to see without a microscope, meaning you’ll frequently see their damage long before the specimens themselves. Hidden nematode activity may be to blame if you’re caring for your plants properly and they are still dying from apparent dehydration and/or starvation.

Acting quickly is key – at worst, you may need to remove your topsoil completely and to treat it with neem oil or other organic pest killers. Mulching some deterrent plants into your oil, such as painted daisies and French marigolds, can also deter nematodes from coming back.

Are worms bad for my garden?

Not always – many worm species are essential for keeping our garden soil aerated, rich in nutrients, and to help break down decaying matter. Vermicomposting, in particular, revolves around the benefits of keeping worms to produce rich, highly nutritious compost for plant and vegetable growth.

Most earthworm species are beneficial to your garden, providing they aren’t out-competing other animals for soil and nutrients. Conversely, the species listed in this guide may stunt plant growth or even kill some specimens altogether – it’s important to know what to look for. Typically, if you notice small, white worms congregating on the topsoil, they are likely to cause damage if left to prosper.

Any species closely related to the earthworm are likely to be great for keeping your soil aerated – ‘nightcrawlers’, for example, are types of earthworms that get a bad reputation when it’s not always deserved. This term is often used to describe worms that have traveled to North America by way of foreign soil – and while some worm species can be invasive and destructive in the wild, you shouldn’t have too much to worry about in your own garden.

Keeping your soil aerated is a must if you are growing plants that suffer from mold and/or which need clear-draining mediums – such as lavender, which is otherwise fairly laid back left to its own devices. Giving your plants and herbs a feast of earthworm-loosened soil will help their roots to spread and may even help you get bigger yields in flowers and vegetable crops.

Thankfully, removing most ‘bad worms’ humanely from the soil may be as simple as transferring them to a compost bin or relaying topsoil with a fresh coat of neem oil to act as a deterrent. There’s no need to use chemicals in your garden to eliminate the hungriest of ‘bad worms’ – so don’t be tempted to stock up!

Failure to take care of destructive worms and larvae could result in you losing beautiful plants that attract butterflies and other pollinators – so take action!