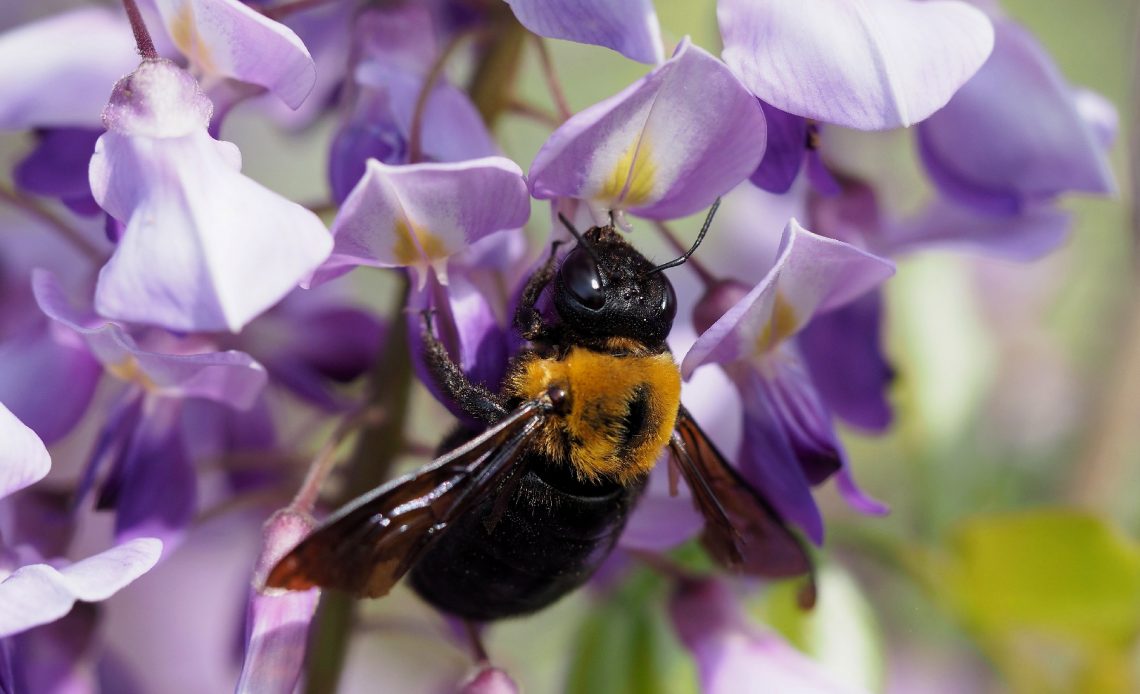 Wisteria has an ethereal quality that can turn an ordinary backyard into a magical, otherwordly garden. Featuring clusters of bell-shaped purple flowers draped gracefully from a vine, everyone who visits your garden is sure to notice this magnificent climber. But what about insect visitors? Do bees like wisteria?

Yes, bees like wisteria. This plant’s numerous flowers give bees plenty of opportunities to forage for nectar and pollen. This is one of the best plants to grow if you want to attract different pollinators to your yard.

Why are bees attracted to wisteria?

Wisteria blooms once a year with flowers appearing in mid to late spring. These flowers make their debut fairly early in the season, as the bees’ search for food begins in earnest. Traditional wisteria is pale lavender in color, but you can find varieties with white, blue, and pink flowers, too.

Bees like wisteria plants because the flowers produce liberal amounts of nectar and a heaping dose of pollen to boot. Even though bees are willing to fly many miles to forage for flowers, they prefer not to have to work too hard. With so many flowers on the same vine, bees can gather enough pollen and nectar from wisteria to take back to the hive in just a few quick stops.

Wisteria provides bees with another valuable resource, and that is protection. Even though bees just love sunflowers and daisies, these open-faced blooms leave them vulnerable to predators. Woodpeckers and other birds can easily spot bees on large open flowers and may decide to prey on them.

Wisteria’s clusters of flowers give bees plenty of places to hide from potential predators. The baby bonnet shape of each individual blossom shelters the bees as they forage. Furthermore, the flowers are small enough to allow only one bee to visit at a time, yet roomy enough for bees to collect pollen and nectar easily. Not having to compete with other bees is a major selling point. So, from a bee’s point of view, wisteria is a jackpot because it allows them to feed freely and safely.

Is wisteria safe for bees?

As a member of the legume family, wisteria relies on bean pods to propagate. The seeds and pods, as well as the plant itself, are toxic to both humans and animals. Signs of wisteria toxicity include gastrointestinal symptoms, like diarrhea and vomiting, as well as neurological symptoms, like confusion. And these symptoms can last for days after ingestion. Sometimes up to a week!

Wisteria flowers, on the other hand, are safe for human consumption in moderation. Many backyard foragers use them in salads and drinks. But while humans should limit their intake of these pretty flowers, bees can enjoy as many as they want. So if you have wisteria growing in your yard, you don’t have to uproot it. It’s a perfectly safe source of food for your bees!

Do honeybees get nectar from wisteria?

Wisteria flowers are extremely fragrant, so they attract many different types of bees, including bumblebees and carpenter bees. In fact, it’s such a valuable food source for carpenter bees that male bees will stake out their territory near wisteria and defend it against potential competitors.

Honeybees like wisteria, too. They’re more than happy to use its nectar to produce honey. And the more wisteria flowers that are available to them, the greater the concentration of wisteria nectar in their honey.

Fortunately, since wisteria flowers are edible, honey made from wisteria flowers is edible, too. If you have domestic bees, you can continue to collect honey while the wisteria is in bloom. You can even plant wisteria near your hive boxes to help feed your bees. Wisteria looks stunning and creates an incredibly fragrant garden when planted with other bee favorites, like rosemary and lavender.

Is wisteria good for other pollinators?

Is it ever! Wisteria attracts many pollinators, including wasps. They load up on nectar and help pollinate the plant. Since so many bees are drawn to wisteria, this gives wasps ample opportunity to prey on them as well. If you have wisteria, be careful around it when it blooms. The bees that visit are so focused on pollinating that they won’t bother you if you bump into the plant. The wasps, on the other hand, may sting you.

If you plant wisteria in your garden, you can also expect hummingbirds to show up. With wasps and hummingbirds competing for nectar, you’re bound to see territorial behaviors from both of them. But, don’t worry. These squabbles don’t usually come to blows. Fortunately, hummingbirds are faster than wasps. Much faster. We’re talking “faster than a jet plane” fast. Those pesky wasps are no match for them!

Butterflies are just as crazy about wisteria as bees are. In fact, certain butterfly species will lay their eggs in wisteria, including the long-winged skipper butterfly. Wisteria has the potential to attract dozens of butterflies to your backyard in the spring. Planting daisies nearby is a great way to make sure those butterflies stick around well into the summer.

Which types of wisteria are best for attracting bees?

Hybrid wisterias that bloom several times in a season are extremely popular with landscapers. Unfortunately, they’re significantly less popular with bees. They simply don’t have enough pollen or nectar to make them worth the bees’ time.

See, when horticulturists hybridize plants, their aim is to create an ornamental flower that is pleasing to look at. Most of these plants are sterile. Since they don’t need to reproduce, there’s no need to generate pollen or nectar. For bees, hybrid plants are major duds. This is the most important thing to keep in mind when choosing wisteria for your garden.

Stick with classic wisterias that produce plenty of food for bees. Chinese and Japanese wisterias are bee favorites. These plants grow quickly and thrive in shady, damp places. However, because they can be invasive, you may want to stick with American wisteria. It’s slower growing but more manageable.

Wisteria works overtime to bring pollinators to your garden. It’s just the kind of plant you need if you want to bring more wildlife to your backyard!