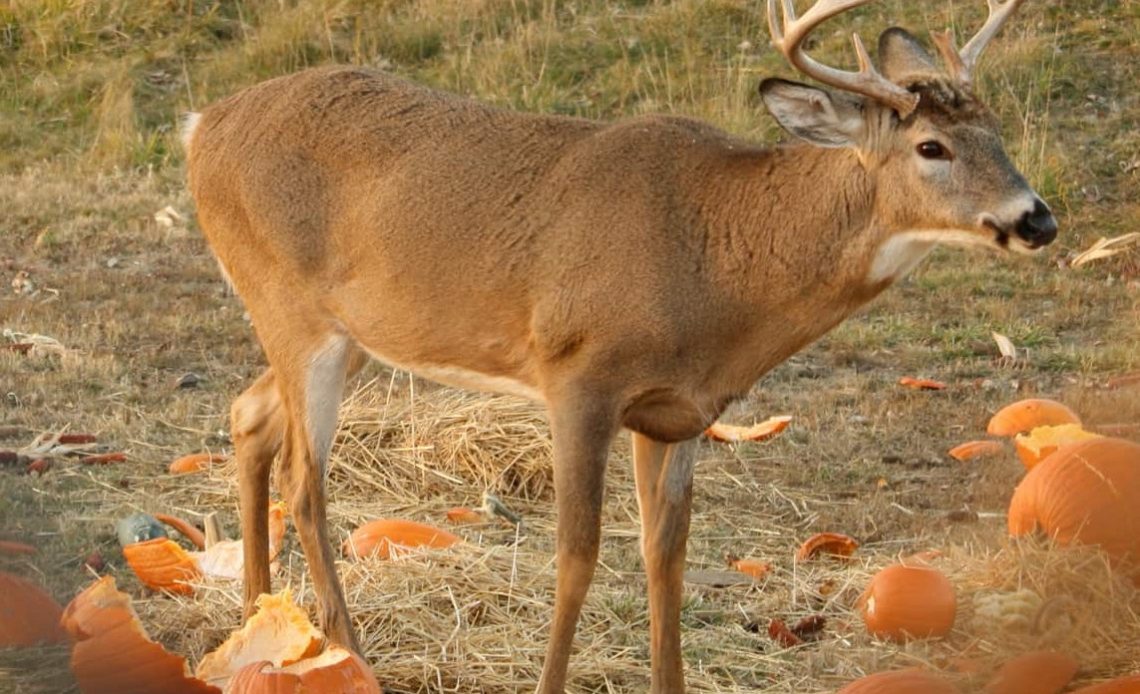 Carving pumpkins is a Halloween tradition beloved by many. Autumn just wouldn’t be the same without jack-o-lanterns! But before you set your pumpkin masterpiece on your front porch, you may wonder if some hungry deer will come along and make a meal out of it. Is it safe to leave your pumpkin creation out for all the world to see? Or do deer eat pumpkins?

Yes, deer love to eat pumpkins. They enjoy eating every part of the plant, from the flowers to the gourds. Fortunately, if you want your pumpkins to survive the season, there are a few things you can do to keep the deer away from them.

Deer can absolutely destroy your garden, whether you’ve planted ornamental flowers or fruits and vegetables. They’ll chow down on your hydrangeas then they’ll turn right around and treat your okra plants like a cafeteria-style buffet. But if there’s anything that deer like more than these two plants, it’s pumpkins.

Why do deer eat pumpkins? For the same reason that people eat pizza and ice cream. Because they taste good! Deer love the taste of pumpkins, especially the seeds and the gooey, slimy innards — you know, all of the junk you scoop out before cooking or carving the pumpkin. Ironically, the stuff we throw away is exactly what the deer like best!

Of course, deer will eat pumpkin plants, too. Pumpkins are heat-loving vines that are planted in June. They’ll attract deer to your garden until the end of October when the pumpkins are ready to be picked. Deer will nibble on the leaves, especially the new growth. They’ll eat the blossoms, too, if they get a chance, and once they do that, your pumpkin plants won’t even produce.

As for the pumpkins themselves, whether or not the deer disturb them depends on how determined they are. If there are better food sources available, there’s a good chance they’ll leave your pumpkins alone. But, if food is scarce, or if your local deer just have a hankering for pumpkins, they may use their front hooves to bust through the shells and eat your gourds from the inside out.

Are pumpkins safe for deer to snack on?

You bet they are! Pumpkins are a wonderful snack for deer because they’re so nutritious. Deer are herbivores. And because their diet is limited to vegetation, they need a huge variety of fruits, vegetables, and plants to meet their nutritional requirements. Pumpkins are one of the better sources of vitamins and minerals around, so it’s no wonder deer often make a beeline for them.

For starters, pumpkins are chock-full of fiber, which deer need to keep their digestive tracts in good working order. But, on top of that, pumpkins are a rich source of the B vitamins that deer need to turn their food into energy. And they also provide a heaping dose of fat-soluble vitamins A and E, which support vision as well as coat and hoof health.

These gourds are an excellent source of blood-building minerals, too, including iron, copper, and zinc. Deer are particularly susceptible to ticks. The fact that pumpkins ripen in late October is especially fortuitous because even though tick season is at its height in midsummer, it peaks a little again in fall. So all those pumpkins can help them ward off anemia.

Pumpkins can also help your local deer herd build better bones because they’re a good source of calcium and phosphorus. These two minerals can be hard to come by for deer, who will eat bones just to get enough of them. Lastly, pumpkins are also a decent source of magnesium and potassium. When offered along with a salt lick, they’re a great way for deer to keep their electrolytes balanced.

Pumpkins are a great resource for deer. But deer aren’t the only animals that like to eat them. Bears have been known to destroy fall-themed yard displays to get their greedy paws on these nutritious gourds. And, do you think those furry devils care if your autumnal decorations are ruined? No. No, they do not.

Groundhogs can make short work of your pumpkins, too. That is if the squirrels, field mice, and chipmunks don’t get to them first. These little guys will chew holes into the pumpkins to get to the seeds, then leave a mess behind. As the destroyed pumpkins sit, they begin to smell and attract other animals.

Birds like to visit busted pumpkins. Like most other animals, they forage on the seeds. They may nibble on the fleshy insides of the shell, too. Rabbits may feed on pumpkin remnants as well, but they’ll seldom seek them out. They prefer to eat the pumpkin plants, instead.

It’s worth noting that discarded pumpkins can attract bugs. Lots of bugs. Rotting pumpkins give off a strong odor that will draw insects like a magnet. If your region is going through a drought, insects will be attracted to leftover pumpkins for the water alone. So if you’re going to leave your old pumpkins out for the local wildlife, dump them in the farthest corner of your backyard, not right up by your house.

How can you keep deer from eating your pumpkins?

If you want to keep deer away from your jack-o-lanterns, the simple solution is to keep them inside. Display them in a front-facing window. If you have a second-story balcony, they should be safe there, too. Easy peasy. But if you want to keep the deer out of your pumpkin patch, the answer isn’t so straightforward.

Keeping the deer away from your garden may take a little creativity, but it is possible. You just need to focus on making your outdoor space uncomfortable for them. See, deer are prey animals. They don’t like sudden movements or strange sounds, as these things trigger their “fight or flight” instinct. When you fill your backyard with animated, noisy bells and whistles, they’ll pack up and leave on their own accord.

You can go the old-fashioned route and try setting up a scarecrow. This may work initially, but deer are pretty smart. They’ll observe from afar until they realize your scarecrow isn’t a real person, then they’ll come right back to your garden. A much better choice is to find some whirligigs and other spinning lawn ornaments to keep near your garden. The erratic motion will scare the deer off. Windchimes are a good investment, too, because deer don’t like random noises, melodious or otherwise.

Another effective way of keeping the deer out is by installing a deer-repelling sprinkler. These motion-activated sprinklers are unpredictable, so the deer won’t be able to figure them out. They turn on when animals get too close, and they make sputtering noises that deer hate. Plus, they water your plants, and that’s a good thing!

If these measures aren’t enough to keep the deer out of your pumpkin patch, try giving them something else to snack on. Deer corn can be purchased at most feed stores (corn sold for birds and squirrels can be used, too, if you’re in a pinch). Most deer prefer the crunch and quick energy that carbohydrate-rich corn provides. They’re usually all too happy to eat the corn and spare your pumpkins.

While you’re at the feed store, look for alfalfa cubes. Dehydrated alfalfa cubes are sold in forty to fifty-pound bags for livestock, but deer love them, too. Toss a couple of handfuls of alfalfa cubes a few yards away from your garden. Once the deer realize there are better food choices, available, they won’t be too interested in your vegetable garden anymore.

What’s the best way to use pumpkins to attract deer?

If you want to give the deer some of your extra pumpkins, they’ll certainly thank you for it! But don’t just set them out for the deer to find. Some deer know to break the pumpkins open, but others don’t, so you’ll need to prepare them, first.

Really, all you need to do to use pumpkins to attract deer is cut a large hole in them. If your pumpkins already have holes from when you carved them, that’ll do just fine. Otherwise, simply use a large kitchen knife to carefully remove the top and the stem. Then, just set that aside and leave the open pumpkin out for the deer to find. Again, make sure to place the pumpkin away from your house. You don’t want to invite the bugs in!

The larger the herd of deer, the more pumpkins you’ll need. This is even more true if other food sources are scarce. To keep your deer from fighting, set several pumpkins out in your backyard, and make sure to space them out. Deer rely on a pecking order to survive in the wild, but that pecking order may mean the top deer eats all the pumpkins while the others watch and go hungry. Keeping the pumpkins about ten feet apart will make it impossible for the dominant deer to hoard them all, giving the others a chance to eat, too.

Only feed your deer fresh pumpkins. If your pumpkins have started to rot, you’re better off discarding them. Although most deer won’t eat rotting fruits and vegetables, these stinky remnants can attract unwanted pests (AKA more bugs). Also, if they stay in the sun too long, they may ferment, and you don’t want to be known as the crazy person in the neighborhood who got all the deer drunk (or, maybe you do. Who are we to judge?).

So, do deer eat pumpkins? The answer is a resounding yes! But by taking measures to repel the deer, you can protect your pumpkin patch until October. And, once Halloween is over, you can give your deer friends a nutritious snack they’ll love by leaving your old jack-o-lanterns out for them to find.