Do Owls Have Long Legs? 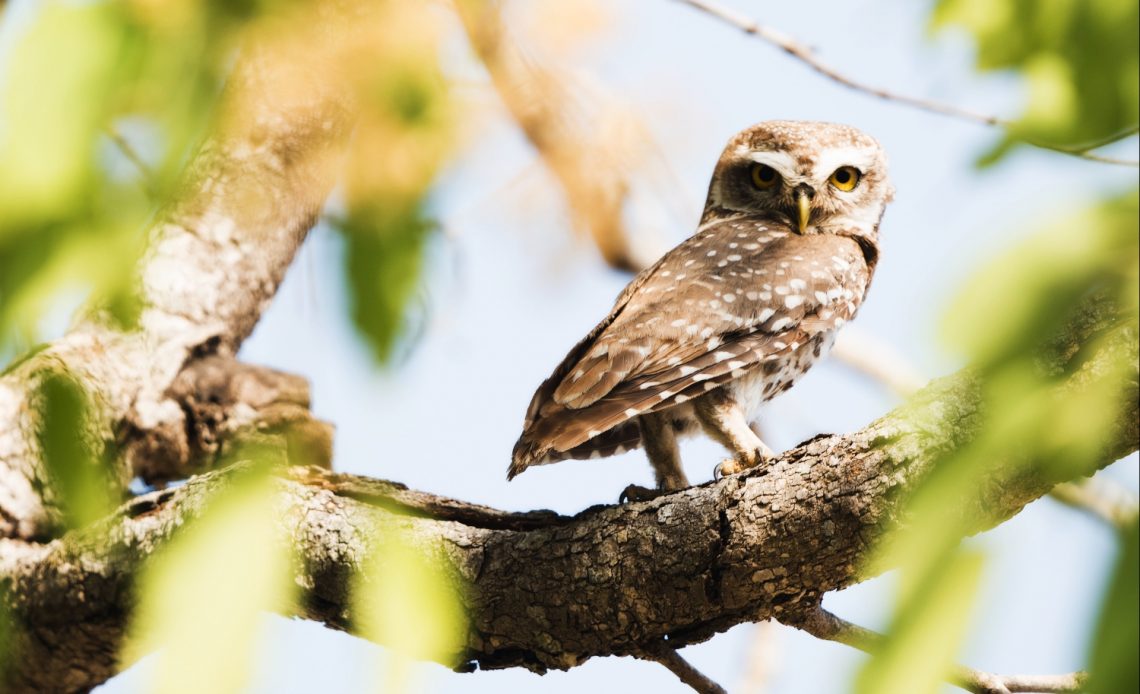 Owls are skilled hunters who rely on their physical strength and coordination as well as their astute senses to close in on a kill. When we think of owls, we picture impressive birds of prey with large, orb-like eyes, intricate plumage, and powerful wings. But our mental image of these wise birds is missing one critical element — legs. Often overlooked, an owl’s legs play a huge role in their lives, from perching to nesting to capturing prey. But what do owl legs look like? Do owls have long legs?

Yes, owls have very long legs! An owl’s legs can be up to half of its total length. Their legs start fairly high up on their bodies but can appear to be part of their abdomens due to their dense plumage. While most owls have long legs relative to their size, the legs of burrowing owls and barn owls are easier to see.

How long are an owl’s legs?

An owl’s legs can make up half the length of its body. This is most apparent when the owl’s feathers have been removed, or when observing owl skeletons. Some owls have obviously long legs, such as the burrowing owl, which spends almost all of its life on the ground, only flying to catch prey. Barn owls, too, appear quite leggy upon closer inspection. They rely on their legs to propel them forward as they push off of their perches and take flight.

Other owls, like snowy owls, great gray owls, and barred owls also have long legs. It’s just that they have such thick plumage that it’s difficult to tell where their legs meet their bodies particularly when they’re perched upright in a tree. You can get a better idea of just how long these owls’ legs are right before they take flight, just before they catch their prey, or shortly after landing.

Which owls have the longest legs?

The answer to this question is anybody’s guess, really. But it stands to reason that the largest owls have the longest legs. The Eurasian eagle owl, found in Europe and Asia (unsurprisingly), measures 30 inches in length and likely has the longest legs of any other species. These massive owls can weigh as much as 10 pounds and have wingspans of over 6 feet.

In the United States, great gray owls take the cake for the longest legs. Nicknamed the “phantom of the north”, great gray owls are sooty brown-gray owls with gentle round faces and vibrant yellow eyes. Their thick layer of feathers protects them from cold climates, but they also conceal their long legs. Most great gray owls measure between 24 and 33 inches in length, making their legs anywhere from 12 to 15 inches long.

Other enormous owls of the U.S. with long legs worth mentioning include the snowy owl, which reaches 20 to 28 inches from head to tail, and the great horned owl, which averages between 17 and 25 inches long.

The anatomy of an owl’s legs

An owl’s legs have all of the same parts as a human’s legs. The joint located above the owl’s foot, where there’s an obvious bend in the leg, is often mistaken for a knee, but this is actually an ankle. The patella, or kneecap, is situated much higher up on the leg, near the body where it’s covered in feathers.

While the owls’ knees bend forward, just as our knees do, their ankles bend the opposite way. The result is the owl can open and “fold” its leg like an accordion. This broad range of motion impacts their ability to take off, grab their prey, and land.

Owls are excellent fliers. Even the short-eared owl, with its odd, moth-like flight pattern, is a skilled avian. But owls don’t spend all of their time flying, you know. They can also walk, run, and climb.

When young owlets are learning to fly, they may use their legs to climb back up to their nests, rather than trust their underdeveloped wings to carry them. Smaller owls that feed mostly on insects, like elf owls and northern pygmy owls, will use their legs to capture moths and beetles right out of the air. And ground-dwelling owls, like burrowing owls, may choose to run to catch up to their prey, rather than fly.

Owls use their legs to maintain their balance as they perch, depart, and land. They also use them to fly feet first as they capture their prey. But even though owls are capable of moving around using their legs alone, they tend to avoid doing so as it leaves them vulnerable to predators. Owls generally prefer flying over other methods of travel.

Can owls back up?

Yes, owls can back up, and they may do so to avoid predators. Owls will puff up their feathers so they appear larger than they really are while simultaneously backing away from a perceived threat.

The reason owls are able to back up has less to do with their long legs and more to do with the shape of their feet. Owls are zygodactyls, meaning they have three talons that face forward, and one that faces backward. This helps to keep them balanced and allows them to move both forward and backward.

Can owls stand on one leg?

Like other birds, owls will rest their legs by standing on one leg and then another. This helps prevent muscle strain and injury. Owls can also sit back slightly on their legs to help relieve pressure, however, owls cannot cross their legs as their knees do not allow for that much lateral flexion.

Yes, owl legs are usually covered in feathers. When positioned in such a way that their legs are on full display, most owls look like they’re wearing long pants.

The owl’s lower leg is quite thin, and that’s because most of the fat is located in the upper part of the leg, leaving nothing but tendons and bone in the lower part. The lower part of the owl’s legs are more likely to be exposed to the elements, but because there’s little body fat stored in them, there’s also less circulation. So a thinner layer of feathers is enough to protect their lower legs from the cold.

Barn owls typically only have a few feathers on their legs, although they still have a thin layer to protect them from the elements. Because they have less plumage compared to other owls, barn owls can help you get a good idea as to how long owl legs truly are.

Now, even though owls have feathery legs, it is worth mentioning that some owls have bald feet, especially those native to warmer regions. This allows them to disperse heat and cool down on hot days. But even owls that have featherless feet still usually have feathers on their legs.

Why do owls have such long legs, anyway?

Ironically, it’s the owls’ long legs that help make them such skilled fliers. Their thin, lanky legs work to keep them stabilized as they glide through the air, much as a cat’s tail keeps it balanced as it runs and jumps.

Though the owl’s thin legs look a bit ridiculous to us, they actually serve a purpose. The thin muscles of the leg are kept low, where they won’t weigh the owl down. And the heavier leg muscles are situated close to the bird’s body, which not only helps the owl stay warm but also prevents the owl from being thrown off balance as it swoops down on its prey.

Additionally, owls rely on their long legs to provide leverage as they tear into their prey. These raptors have incredibly powerful talons. The great horned owl, for example, can exert a whopping 500 pounds of pressure per square inch. That’s 10 times stronger than the average human hand. Now that’s a force to be reckoned with! And it wouldn’t be possible without those goofy-looking long legs.

What’s the best way to catch an owl walking?

Now that you know that owls have long legs, you may want to try to get a glimpse of them firsthand to gain a better understanding of how they influence the owl’s ability to fly, hunt, and eat. But what’s the best way to do that?

Start by installing an owl box. It may take local owls a few seasons to find it, and you’ll have to take measures to keep squirrels out of it in the meantime. But setting up an owl box is the best way to bring more owls to your backyard. Another great way to attract owls is by making your property a safe haven for their preferred prey. Leave brush piles on the edges of your yard for small rodents to reside in. This will give you ample opportunity to see those owl legs in action.

Owls are impressive creatures — long legs and all! By taking measures to make these stunning birds feel more welcome on your land, you’ll be doing your part to support local owl populations and your ecosystem as a whole.