Do Squirrels Groom Each Other? 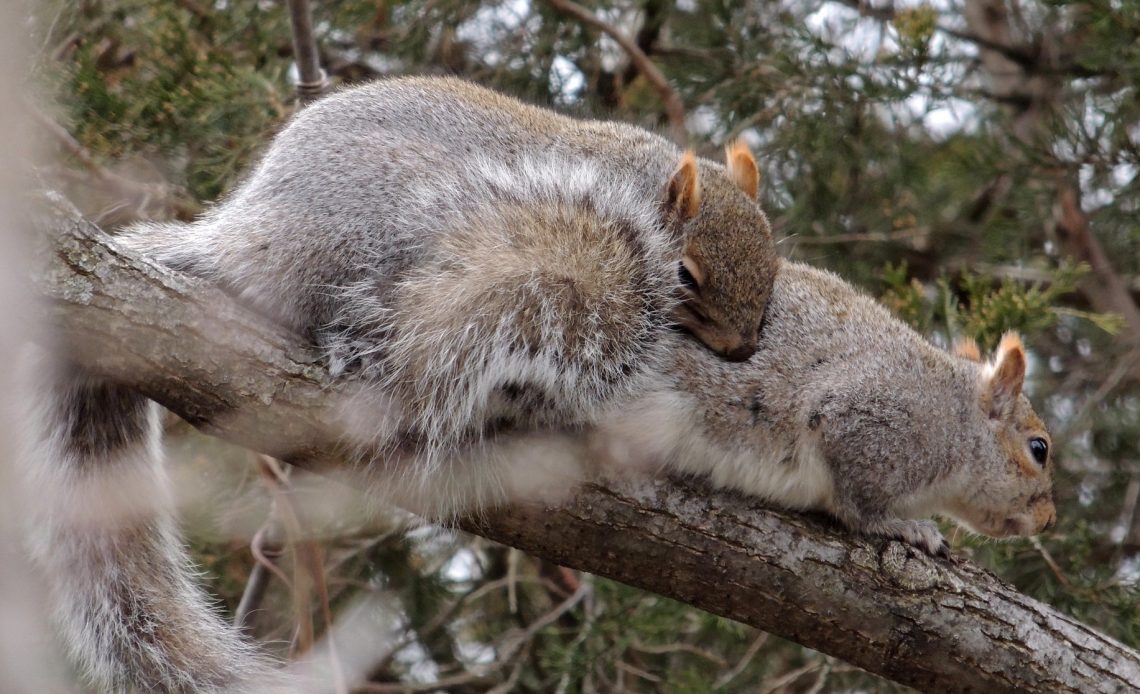 We often see squirrels together, playing, chasing each other, and sometimes gnawing and even scratching one another. They also very commonly fight among each other – especially males. But do squirrels groom each other, too?

Squirrels do indeed groom each other, and this can sometimes be mistaken for fighting. This is due to the fact that the grooming process often involves a lot of gnawing, scratching, and licking.

Why do squirrels groom each other?

Squirrels groom each other to keep clean – it’s as simple as that. Squirrels will often clean their young, for example, as they are too young to take care of themselves adequately.

However, you will also likely see adult squirrels grooming each other, too. For example, squirrel siblings are known to clean each other for simple displays of affection – they keep it in the family.

That being said, the most common show of affection between squirrels is usually between the males and females of the species as they are getting ready to mate. In fact, the more aggressive they are with one another, the more likely they are preparing to breed.

Often, when we notice squirrels chasing each other in trees and across the ground, we assume that it is because they are playing together – when in fact, it is usually part of a mating ritual. The male traditionally chases the female – meaning that if you see one or two giving chase, it’s an act of love!

Do squirrels play with each other?

Again, squirrels that appear to be playing with each other are most likely to be preparing for mating. It is part of what’s known as the ‘chase’.

During this ‘chase’ or apparent playtime, you will frequently hear squirrels chattering at each other – it’s a display of excitement. However, this type of excitement is different from the behavior you’ll see when squirrels tease dogs.

Squirrel play behavior is widely disputed and analyzed – some argue that our human idea of ‘play’ may not apply to these creatures – while others believe it’s a highly important social and developmental process.

In any case, if you attract squirrels to your yard, it’s likely that you will see one or two scampering after each other – and it’s not always to do with mating or grooming.

How do squirrels groom themselves?

Squirrels generally clean themselves much as you’d expect cats or dogs to – by carefully licking and scratching themselves.

However, squirrels are also known to take dust baths whenever they feel necessary.

They will find areas in the ground where the soil is dry and almost has a powdery texture – sand, for example, is a popular bathing resource.

Squirrels will happily roll in the sand, shaking away the excess powder before getting back to their daily routines. But – why roll in the dirt at all?

Dirt or dust baths are great for removing parasites from squirrels’ bodies. As they rub themselves against the dirt, loose hairs come off, and coarse sand is great for scratching away at itchy spots. This means that they can easily scratch away any nasty hangers-on and get some much-needed relief.

Squirrels also take dirt baths to help maintain their coats. As mentioned, while taking dirt baths, hair and fur can loosen off, leaving room for more fur to regrow anew – it’s somewhat like a haircut.

Sand can also help squirrels to remove excess oils from their fur. You may have heard of a technique for using baby powder in your hair when it is greasy by way of making it look clean until you next take a shower. This works because the baby powder traps the oil in your hair, making it look cleaner. The same, oddly, applies to squirrels – they often look shiny and clean after a roll around in the dirt.

Squirrels rarely go out in the rain or feel the need to bathe with water – so don’t be too surprised if you spot one or two rolling around on the ground!

Can I groom a squirrel? Can I give a squirrel a bath?

While some anecdotal resources suggest that you can give squirrels baths or groom them, it’s not recommended unless you are a wildlife professional. Squirrels are wild animals and are both likely to carry harmful parasites and show aggression and/or fear if they are handled.

If you choose to bathe a squirrel yourself, they may get scared, bite and/or scratch you – which could lead to a trip to the emergency room, and leave your local rodents feeling particularly nervous.
Therefore, it’s often best to leave squirrels to it. You can help them daily by offering mealworms in squirrel feed, for example, and ensuring that there’s lots of variety in nuts and seeds on any tables you set up for them.