How Much Do Hummingbirds Weigh? 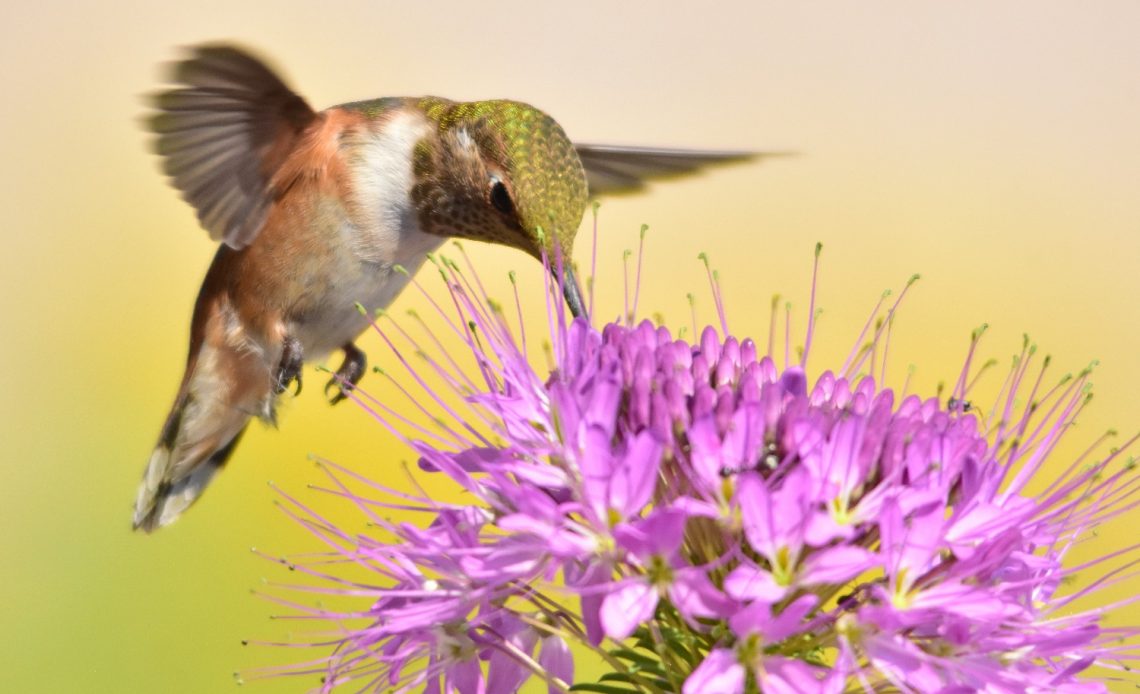 Hummingbirds are well-known for being tiny, energetic little beasts – that consume an astounding amount of calories for their size! These pollinators have incredible metabolisms to help burn off their nectar and insect-filled diets. But how much do hummingbirds weigh, on average?

Most hummingbirds weigh around 4g. Their bulk can change dramatically depending on their diets, migratory status, species, and even their gender, too.

How many ounces does an average hummingbird weigh?

The average hummingbird only weighs between 0.14 to 0.4oz, with around 0.2oz being their median weight. We need to consider that ‘average’ and ‘median’ take into account one of typical size, and before feeding, too.

For example, a hummingbird may bulk up to a relatively hefty 8g, or 0.28oz, when feeding for a long flight. Ruby-throated hummingbirds, for example, are likely to put on significant weight so they can fly hundreds of miles without stopping to feed. This particular hummingbird travels around 1,300 miles every winter across the US towards Central America – which means they’re going to need a lot of energy.

The hummingbird’s average bulk isn’t pure fat – about a third is muscle alone. These birds flap their wings almost continuously – which helps to build incredible strength. Hummingbirds, on average, fly up to 23 miles per day to visit more than 2,000 flowers for nectar – which explains their relatively toned physiques!

Female hummingbirds also weigh a little more than their male counterparts, often by as much as 0.9g, or 0.03oz. Some birdwatchers use this to ascertain which gender of bird they’re looking at – though it’s not always easy to tell a hummingbird’s bulk from afar.

Does a hummingbird weigh less than a penny?

A penny, or a US one-cent coin, only weighs 2.5g, or 0.08oz – which is lighter than the average hummingbird. A standard nickel, on the other hand, weighs around 5g, or 0.16oz – just lighter than a hummingbird, and much closer to the animal in weight. If you have a nickel in your change, you’re carrying around the equivalent of a hummingbird in bulk!

The only way a hummingbird could be lighter than a penny would be if it is an infant – less than a month old – or if it’s the bee hummingbird, the smallest species on the planet!

How much do baby hummingbirds weigh?

Baby hummingbirds, as you may expect, are much smaller than their parents, weighing just 0.6g, or 0.02oz! They are only around an inch (2.5cm) in size after hatching.

Hummingbird nests, if you’re lucky enough to find one, aren’t too much larger. They generally only measure over an inch in diameter, and eggs will weigh anywhere up to 1.4g, or 0.04oz.

The lightweight builds of these nests means that hummingbirds normally won’t return to them year after year. They simply rebuild, as they may get destroyed by weather, animals, or even careless gardeners!

Baby hummingbirds will typically grow to full size within three to four weeks – that said, given their parents’ small stature, this isn’t much to bulk up to!

How much does the largest hummingbird weigh?

While all hummingbirds are famously tiny, the giant hummingbird is (unsurprisingly) the largest of the lot, weighing up to 18g or 0.7oz! The Patagona gigas are three-and-a-half times the average hummingbird’s size, though you won’t find it fluttering around your garden in the US. It’s a native of South America, usually flying between Colombia, Argentina, and Chile.

The largest species breeding in the US right now is the blue-throated hummingbird, weighing in at a top bulk of around 7.6g, or 0.27oz. That’s under half the size of the Patagona gigas!

The blue-throated hummingbird tends to visit south-western states, usually towards Texas, Arizona, and leading towards the north of Mexico. Be on the lookout for giants!

How much does a bee hummingbird weigh?

The bee hummingbird, the smallest of all its species, only weighs 1.9g (0.06oz) at absolute heaviest. That’s lighter than your average dime – and around half the bulk of hummingbirds you’d otherwise find flying around US gardens.

Bee hummingbird nests are even smaller than the average, too – they’re less than an inch in diameter! This isn’t a species you’ll find natively in the US – as its home is further south in Cuba.

The smallest species native to the US is the calliope hummingbird, fluttering across at just two inches in size. This hummingbird weighs 1.9 grams on average, which equates to 0.06oz – just three times the size of an average baby hummingbird.

Are hummingbirds the smallest birds in the world?

The weebill, or Smircrornis brevirostris, is a yellow, Australia-native bird that’s a little over three inches (8cm) in length. At a top adult weight of around 6g, or 0.2oz, this jungle beast is a similar size and bulk to the average hummingbird!

The goldcrest, or Regulus regulus, goes even lighter. It’s around 5.7g in weight, and is the smallest bird in Europe. Despite its small size (even compared to some hummers), this curious creature goes by the nickname ‘king of the birds’!

Hummingbirds are famously tiny – but they still need help bulking up thanks to their intensive metabolisms. As a wild yard owner, the best you can do to help your local hummers is to grow a variety of flowers rich in nectar that they can rely on.

Consider growing clematis vines, azaleas, sunflowers, morning glories, fuchsias, and snapdragons. Not only will they provide a healthy balance of calories to keep up your local hummingbirds’ strength, you’ll do a great job of attracting hummingbirds to your garden across the year.