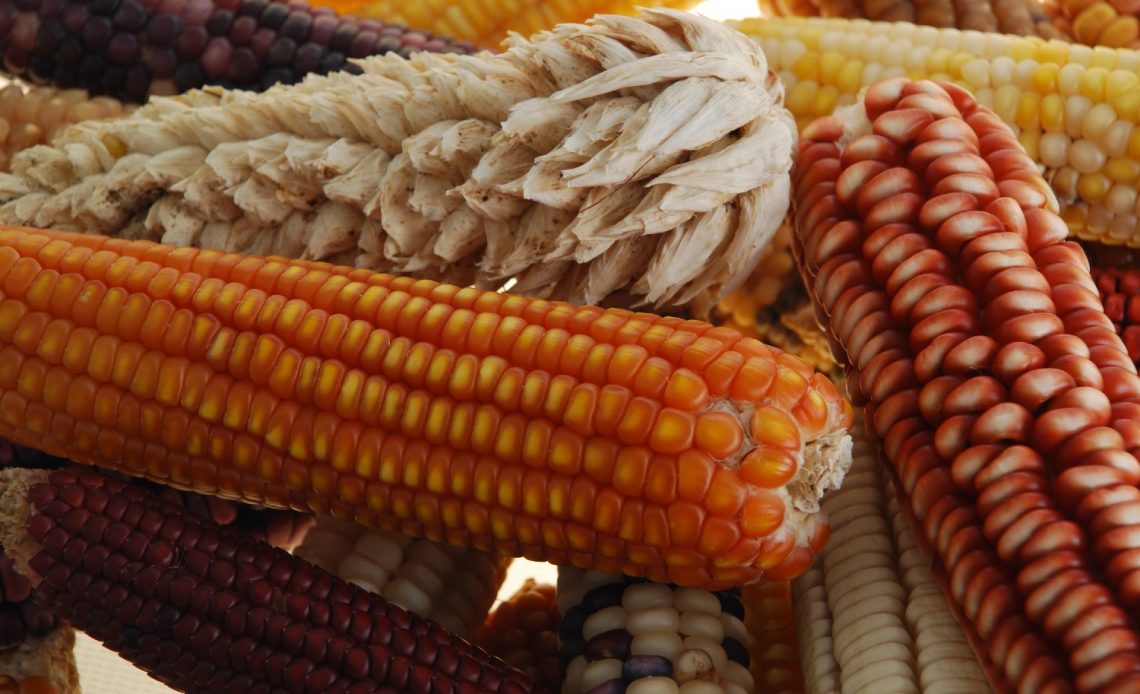 While it’s common to see corn growing across fields all over the US, have you ever wondered exactly how it’s grown? The history of the crop and how we harvest it is truly fascinating – but is corn man made?

Corn is a man-made crop – it’s unable to reproduce on its own. Thanks to human intervention, thousands of different species and varieties of corn are grown worldwide. But where did it all start, and how is corn actually grown in the modern age?

Is corn found in the wild?

Corn is a crop you’ll never see growing on its own in the wild. Humans started growing what we currently know as corn from tiny seed kernels as far back as between 7,000 to 10,000 years ago. Without human intervention, we’d have no corn to harvest!

This first strain of corn was fairly rudimentary and not as tightly packed as the kernels we see today – it was derived from a type of grass called teosinte, or Zea mays ssp. parviglumis. From this name, we derive the term ‘maize’, which refers to all of the crops we call ‘corn’ in general.

Interestingly, around 10-12% of all modern corn genetics stem from Zea mays ssp. Mexicana, despite the thousands of years we’ve been growing the crop in between.

It’s here in the US and in Mexico where corn growing first began – as the crop is endemic to the continent. Native Americans began selectively growing corn for desirable traits and characteristics, a process known as selective breeding. Much like brassicas such as man-made broccoli and cauliflower, we’ve fine-tuned corn to grow larger, taste sweeter, and split into several sub-categories.

The US is far and away the world’s biggest corn producer, generating around a third of all global crops produced yearly – with China and Brazil usually following in second and third place. Worldwide, we can typically expect over a billion tons of corn to harvest and ship!

Is corn a genetically modified crop?

Not all corn is classed as GMO (genetically modified) – though some plants are grown in laboratory conditions to find new ways of helping the crop withstand certain natural pressures. For example, GMO corn may be more pest-resistant than that grown in fields, some may be resistant to chemicals, and other crops may withstand heavy periods without water.

‘GMO’ is a word that some may find scary – but it purely means that a crop has been engineered slightly to grow stronger and more resistant to common problems. The FDA regulates GMO corn across the US among other foodstuffs and reiterates that you’ll find modified crops in everyday food, and that which we feed our animals and livestock. There’s no evidence that GMO corn can cause detrimental health effects.

How is corn selectively bred?

Corn selective breeding occurs outside the laboratory and revolves around carefully harvesting and regrowing specimens that provide desirable traits. For example, if one strain of corn provides larger kernels than most, seeds or cuttings may be taken from this plant and regrown to produce the same results with the next plot.

Selective breeding of corn can help provide bigger yields at more efficient rates and even result in changes to the taste and texture. It’s why there are so many different types of corn available on the market – demand for variety is always growing.

Typically, selective breeding is a painstaking process. The corn we’re able to grow today is based on a template that’s evolved over thousands of years. While we can achieve faster results through selective breeding thanks to modern technology, encouraging genetic change in crops to come will take generations to perfect. It’s partly why genetic modification has exploded as a viable route for bigger, tastier yields in recent decades.

How many types of corn are there?

There are at least 12,000 different types of corn growing worldwide, typically split into four different grades or categories.

Sweet corn, for example, is a common sight in stores worldwide and is bred selectively for its satisfying, juicy taste. This is the corn you’ll typically buy in cans or on artificial cobs in the organic produce sections of your local grocery.

Field corn, meanwhile, is commonly used in baking – it’s ground down into fine flour. It’s also used to feed livestock and other animals. Interestingly, field corn is also being used more and more as biofuel.

Popcorn, believe it or not, is deliberately grown for snacking purposes – the hard kernels of corn you can ‘pop’ on the stovetop or buy at the movies are the toughest to crack.

You’ll also find that some corn is inedible – it’s purely ornamental. Ornamental or decorative corn may arise through accidental cross-pollination, but it’s nevertheless harvested to dress up gardens and homes. Ornamental corn can be derived from hard-shelled popcorn and preserved if not fit for consumption. Many people also choose to grow this corn for the visual effect at home!

Outside of these four main types, you may also come across flint corn, which is similar to popcorn in that its shells are notoriously tough! This is a popular snacking corn that’s commonly known as ‘chedel’ in some areas of Central America.

Corn can’t reproduce on its own, which explains why you won’t find it in the wild. This is largely thanks to thick, hard husks surrounding corn kernels – they simply won’t propagate without some intervention.

Even attracting pollinators such as bees won’t encourage growth – corn can pollinate through heavy winds, but farmers frequently need to break seeds away by hand.

How large can corn grow?

With human assistance, each ear of corn grows a tall, tubular ‘cob’, eventually reaching at least three inches in size. In the best growing circumstances, ears of corn can even grow to a foot in length – but size doesn’t always denote when corn is ready to be harvested.

Instead, farmers look for rounded kernels and a firm structure to the ear when gently squeezing their crops. The silk, a fibrous tuft found towards the top of the ear, will also change color into a brownish shade – if it’s brown and dry, corn is ready to be harvested.

What does corn need to grow?

Corn thrives in nitrogen-rich soil and lots of sunshine – it will simply die off in damp and cold conditions, which is why you’ll see acres of corn growing in open fields – so it has access to the sun throughout the day.

Without human intervention, corn can’t fend for itself – it’s at risk from wilt, fungi, rodents, and insects. Both selective breeding and genetic modification can effectively make corn more resistant to these threats and, therefore, more self-sufficient. Doing so reduces the labor time and effort required to grow and harvest such crops.

What is man-made corn used for?

Corn is a staple part of food production the world over – as dextrose, it’s used in beverages, desserts, breakfast cereals, powdered food, canned vegetables, sauces, food colorings, and baked goods – just to give you a sample!

It’s a common misconception that corn is purely used in food and drink. In various forms, corn helps to produce the clothes we wear, the tires we use on our vehicles, and is vital in various lines of scientific research.

There’s corn syrup, too – which is useful in dyes, textile finishing, wine production, leather tanning, shoe making, meat production, beer brewing, and artificial flavor production. Corn syrup is produced as highly versatile, too – it can be used dried or as a liquid.

Is man-made corn a ‘bad’ thing?

Man-made corn – genetically modified or otherwise – is certified as safe to eat and use and is heavily regulated. The processes we’ve developed to grow and harvest corn helps to keep multiple industries running in line with ever-growing demand – and at the same time, can help to ease pressure on hard-working farmers.

If we stop cultivating corn by artificial means, industries will grind to a halt overnight – this crop won’t reproduce without a little help from selective breeding. Laboratory studies are also helping us understand more about the protections these essential crops need – and how we can help. While it’s possible for corn to pollinate via the wind, it’s unlikely to survive in the wild on its own.

The next time you enjoy a bowl of cornflakes or use a fresh stick of glue – remember you have hard-working corn harvesters to thank!