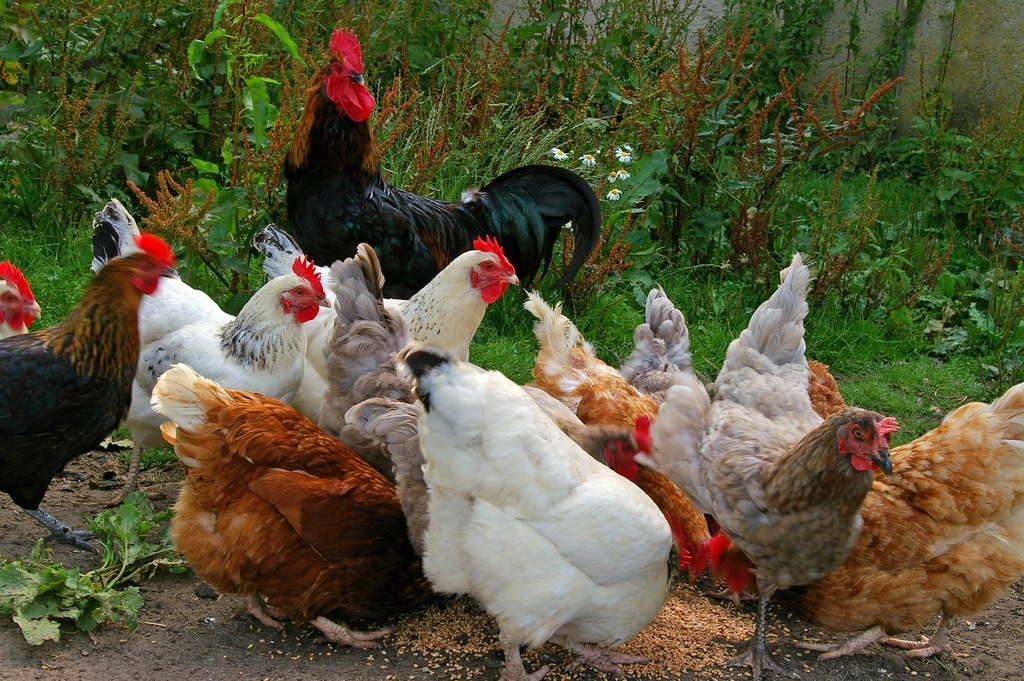 It’s not always easy to know exactly what chickens can and can’t eat – this is because, as animals go, they are incredibly easy to please! They will eat nearly anything that you put in front of them. However, that doesn’t mean you should play up to this behavior – there are, of course, foods that are toxic to chickens, and foods that should only be fed to them in moderation.

If you’re wondering what not to feed chickens, salt, sugar and artificial flavors should be avoided at all cost. However, they are not alone on this list. For example, did you know that most fruit seeds and pips are toxic to chickens – and that you should always avoid giving them rhubarb?

Keep reading for more details on what you really shouldn’t feed your chickens – whether you are a novice chicken keeper, or are keen to change up your coop’s diet!

It may seem obvious, but anything containing alcohol, caffeine, tobacco or chocolate should never find its way into your chickens’ feed. The same applies to any food considered extremely salty, sugary, rotten, artificial, fried, or moldy. That goes for old peanut shavings and moldy bits left over, too. Studies going back decades indicate mold is never healthy for your hens.

If you’re also thinking of giving your chickens butter, chips, ice cream, pastries, fro-yo, uncooked pasta or beans – take a step back. They are all immensely harmful to your chickens (and not so good for people in excess, either!). Try and avoid citrus fruit, too – they are much too acidic for the average chicken.

That being said, there are also plenty of organic foods that should be avoided. Even your most common organic kitchen scraps can be very dangerous for chickens, which is why it is vital to know about which ones to avoid!

Other items to avoid feeding your chickens

Along with the general no-no’s such as those listed above, there are a few lesser-known food items you should never give your chickens:

This may come as no surprise to you, as most pet owners know that onions and garlic are highly toxic to certain animals, such as dogs – the same applies to chickens.

Spinach may not be the most toxic food you can give to a chicken, but it can still cause serious problems for them, specifically when it comes to urinating.

Although it is specifically the pits and the skins that affect chickens, as they contain a toxin known as persin, it may be wise to avoid feeding them avocado period – as various parts of the avocado plant can still contain traces of the aforementioned persin. There’s a chance the inside could still carry trace amounts – and while they are only trace, the negative potential for an ill chicken far outweighs the positives of a little extra protein. It’s probably best to play it safe.

What is tasty and safe for humans isn’t always the case for chickens. If you’re throwing out vegetables or stew high in salt, for example, don’t pass it to the coop.

Rhubarb can be quite difficult to control on the whole. As you may know, its leaves are poisonous in high doses, but surprisingly, the rhubarb itself is also highly toxic to chickens. It contains anthraquinones, as well as oxalic acid.

As wonderful and intoxicating as tomato leaves may smell, they can be deadly to ingest! Tomato, pepper, and potato leaves contain nightshade, making them especially deadly to chickens.

You may notice occasional potatoes with green flesh – and while it may seem like an organic way to dispose of peelings by feeding them to your chickens, there’s nightshade here, too. It is, therefore, best to never feed your chickens potato skins – period.

Similarly, avoid giving your chickens eggplant – studies are ongoing into eggplant toxins, but they’re known to be fairly poisonous to chickens.

Generally speaking, chickens love lettuce, and it can be beneficial for them. However, iceberg lettuce in particular can make them feel sick and develop gastrointestinal problems. Therefore, if possible, stick to darker lettuce, and certainly non-iceberg lettuce.

Not all plants and produce from your backyard will harm your chickens, but it’s worth keeping in mind that certain growths – such as mushrooms, foxgloves, azalea, acorns, toadstools, lupines, holly and rhododendron – can prove fatal if your average hen ingests them. A good rule is, if you know it’s poisonous (such as the highly toxic foxglove), then don’t subject your chickens to it!

Food you can give your chickens in moderation

There are certain foods that chickens – while likely to be highly tasty – should only be eaten in moderation. Not all foods that they enjoy are good for them in the long term. For example:

In many ways, celery can be a nutritional treat. It contains folate, vitamins K and C as well as being rich in fiber. That being said, due to its consistency (being quite hard and stringy), it can be difficult for chickens to digest. You can, of course, feed them celery, but prepare it for them by cutting it into smaller pieces.

As may be obvious by now, you should only stick to seedless grapes for your chickens. Moreover, they too are very high in sugar, and can be quite difficult for your chickens to digest. Only feed them grapes as very special treats occasionally, and slice them up finely before feeding them.

Cheese can be tricky. Never feed chickens moldy cheese (such as blue cheese or cheese that is past its best). It is also difficult for chickens to process dairy in high quantities, so only feed them cheese very rarely, if at all.

Bread is generally an excellent treat for chickens as they love it – however, it has little to no nutritional value for them. Therefore, you should only feed it to them occasionally. As you’ll know by now – moldy bread should go nowhere near your chicken’s feed.

Yes – chickens love peanut butter, and the great news is that it is packed with protein, and may even help your birds to bounce back during molting season. However, it comes with a drawback – it’s high in fat and calories – and as with human beings, they are worth moderating with chickens, too.

It’s worth remembering that chickens have very sensitive digestive systems! If there is anything likely to make you ill or could even poison you, then it has no place in a chicken’s feed.

Chickens can enjoy a huge variety of different fruits, vegetables, and you can even feed your chickens sunflower seeds in moderation. Where possible, you should always stick to a balanced mix of feed recommended to you by either a veterinarian or an animal nutritionist.

Your chickens likely love you regardless of what you feed them – and by avoiding the above, you can be sure you’re keeping them safe from a variety of health problems.

Got any thoughts on chicken feeding? Leave a comment below and share your own tips and experiences with other Wild Yards readers.