Why do hummingbirds fly up to your face? 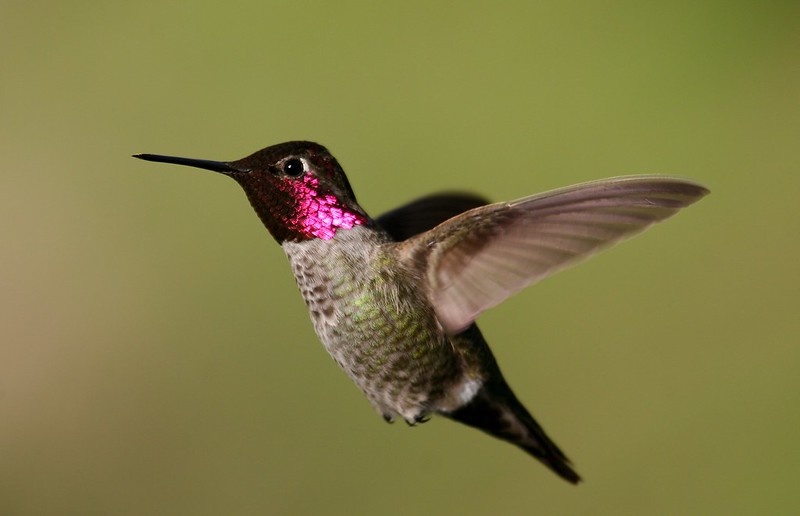 Do you ever wonder why hummingbirds fly up to your face? I know it’s a little weird, but don’t worry. You’re not in danger! The truth is that these bright and beautiful creatures do this for a variety of reasons. Read on to learn exactly why they fly so close and what to do if you’d like them to stop.

Why do hummingbirds fly so close to me?

Hummingbirds have incredible recall and they like to follow the same routines and pathways every day. When they find something in their territory that is new or different (that’s you), their first instinct is to investigate.

If a hummingbird flies up near your face, it’s most likely just trying to get a good look at you. It wants to determine if you are something it has encountered before, if it’s safe to be around you, and if you have anything interesting to explore. Let’s dive a little bit deeper into exactly what that investigation might entail.

4 Reasons Hummingbirds Fly Near Your Face

A hummingbird’s natural curiosity is one of its basic survival tactics. Hummingbirds avoid danger by being acutely aware of their surroundings at all times. Any unknown variable in their vicinity is a possible threat, so their first instinct is to investigate.

Once they know you’re not going to harm them, this natural curiosity takes on a more playful nature. They just want to get to know you as one of the elements of their environment.

Hummingbirds Are Attracted To The Color Red

Another possible reason that hummingbirds will approach you is that you’re wearing their favorite color! Hummingbirds are naturally attracted to the color red, and this includes any of your clothing or accessories.

The majority of the nectar-rich flowers that hummingbirds love have bright colors, so in their mind, anything red might mean food is nearby. This is also true to a lesser extent of orange and yellow or particularly bright purples, pinks, and blues.

Do you have food? ARE you food?

99% of the time, a hummingbird’s primary objective is to find food in the next 15 minutes. This means they are constantly surveying their territory for possible new food sources. When you enter a hummingbird’s environment, one of the questions on its investigation checklist is to determine whether you are a source of food.

Once they figure out that you are not a flower, they may also be checking whether you are carrying any flowers or nectar. This is especially true if your yard is familiar territory and you regularly maintain a hummingbird feeder.

Hummingbirds have to keep up with a lot of interlacing variables to get through their day. Knowing the location of every single flower and feeder in your yard, whether they’ve visited each one or not on a given day, and when exactly they visited each one is all par for the course for your hummers. In addition to this, they also know exactly how long it takes for each flower to refill its nectar supply. It’s honestly quite impressive that they can do all of this intricate tracking with such tiny brains.

It should come as no surprise, then, that hummingbirds can remember your routine for refilling their feeder. This means they know you come bearing food, and they remember when to expect it. Some hummingbirds have even been known to remind their gardeners when a feeder isn’t refilled on time!

A hummingbird’s excellent memory allows it to memorize and recognize consistent elements of its surroundings. Over time, this will include you – especially if you spend a lot of time outside with them.

Hummingbirds have been known to recognize humans and to treat familiar friends differently than strangers. Sometimes this includes flying up to say hello. This is perfectly normal and there is no need to stop or interrupt whatever you’re doing, except perhaps to say hello back!

Are Hummingbirds Ever Dangerous?

Hummingbirds will typically never attack or show aggression towards humans. They are very small and very fast, so their instinct in any fight or flight situation is to quite literally fly.

There are 3 specific situations when you may find yourself on the wrong end of a tiny, dive-bombing hummingbird:

How To Handle Aggressive Hummingbirds

If you find that there is an unusually high level of aggression between the hummingbirds in your yard, there are a few things you can do to help.

When hummingbirds are particularly violent, it’s almost always due to the food supply being insufficient to sustain the population peacefully. You can fix this by providing more food sources and spreading them out a bit.

Spreading out your hummingbird feeders and flower pots creates a larger territory between feeding points, which in turn makes room for all your hummers to have enough space. This also decreases the chances of warring males crossing paths unnecessarily.

A larger environment with more food sources also means your hummingbirds are expending more energy to get from one flower to another. The less energy your rowdier males have, the less they can spend bullying other males, and the more they will focus on food.

Increase the number of feeders and flowers in your yard until you see a decrease in the aggression levels of your hummingbirds. When there is plenty of space and plenty of food to go around, there will be little reason for territorial disputes (though you may still have the occasional disagreement over borders).

Remember that some amount of aggression is normal, especially during mating season. When there is a female to be won, no amount of food or territory will stop your hummingbirds from engaging in courtship matches.

What if you don’t want hummingbirds in your face?

While a hummingbird flying up to you is perfectly safe, some people are still a bit freaked out by it. Not everyone is comfortable with wild animals, and it may be that you’re doing something you don’t want to be distracted from.

There’s no need to fear the hummingbird, but you don’t have to tolerate it either. There are a few things you can do to maintain some distance.

If you know you’re going to be outside and don’t want hummingbirds to come near, it’s best to wear neutral colors. Red clothing and other brightly colored objects will attract hummingbirds, and sticking to a more muted color palette makes you a less interesting element.

If they do come near, the simplest solution is to calmly and gently wave your arms and back away. This lets the hummingbird know that you don’t want it in your space, and it will often take the hint and leave you alone. Hummingbirds don’t want a confrontation with you, so any signal that you want to be left alone is likely to make them fly off.

These 2 measures are usually sufficient to keep hummingbirds away. As long as you don’t have a phobia of birds, you shouldn’t have anything to worry about.

When a hummingbird first encounters you, it may fly near your face to investigate. It needs to know what you are and whether or not you’re dangerous.

Over time, your hummingbirds will get to know you and recognize you as a normal element in your garden. Once that happens, any hummingbirds that fly near are just being friendly and greeting you…or perhaps reminding you that it’s time to refill the feeder.