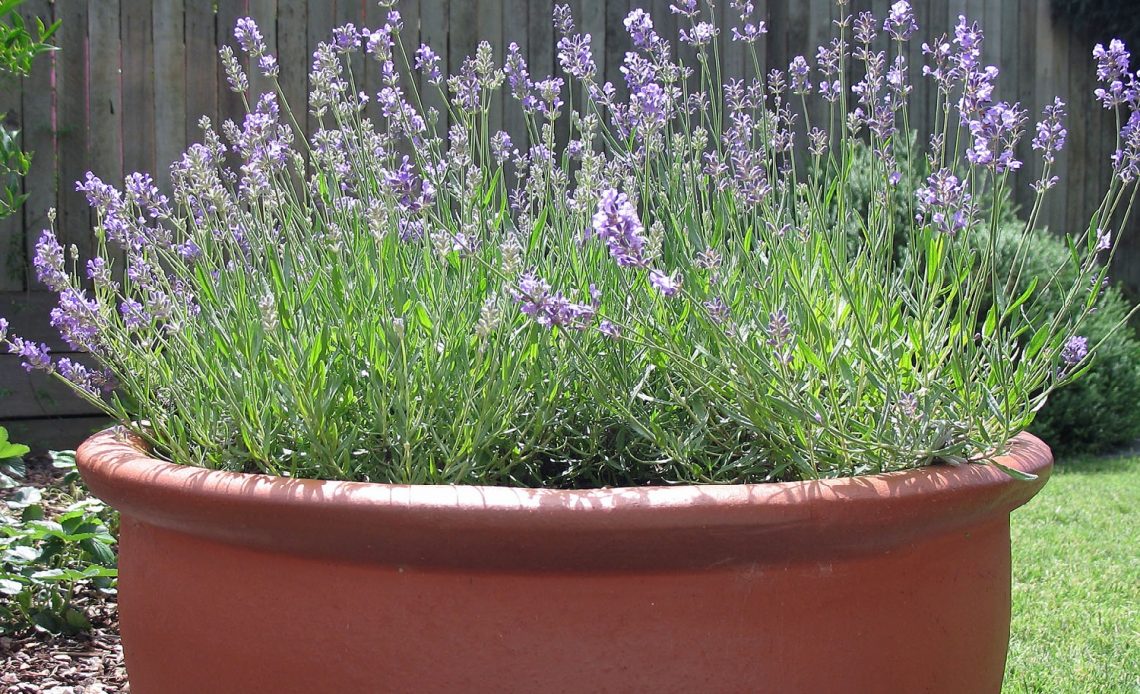 Drought-resistant and heat-tolerant, lavender is native to the Mediterranean region. This flowering shrub is easy to grow and requires very little attention. Its ability to repel harmful insects while attracting beneficial ones makes it a popular choice among backyard gardeners and landscapers alike. But to keep your lavender healthy, you need to make sure it starts out right. It’s important to use the best potting soil for lavender if you want to maximize growth and bloom production.

The best potting soil for lavender is one that is sandy and well-drained with enough grit and gravel to keep the soil loose so oxygen and water can penetrate. How much potting soil you use is also important to lavender’s health as too much can decrease air circulation at the base of the plant, encouraging root rot and mildew.

What are lavender’s soil requirements?

Lavender needs sandy to loamy soil that is well-drained and has a pH level of 6.5 to 8. While it can tolerate a fairly broad range of alkaline and acidic soils, the one thing it cannot tolerate is soggy soil. If the soil doesn’t dry out completely in between waterings, it will be too moist for lavender’s liking.

Clay and other soils that are highly compacted also pose a problem for lavender. While these soils are so impenetrable that they tend to be moisture resistant, their impenetrability also means air can’t get to the lavender’s roots. And, when these soils do become moist, they’re so compacted that they hold onto the moisture for a long time. The longer your lavender plants sit in soggy soil, the quicker they will develop root rot, which is often lethal.

Lavender doesn’t need much nutrition to thrive. However, it does like plenty of nitrogen. Growing lavender with oregano, which has similar soil requirements, helps increase nitrogen levels in the soil and improves lavender essential oil concentration. So if you want to grow lavender for its essential oils to use in rose petal skincare recipes or natural insecticides, consider companion planting with oregano.

What is the best potting soil for lavender?

Traditional potting soils are a lavender plant’s worst nightmare. They’re full of organic matter that holds onto moisture, they’re nutrient-rich to support seedlings and ornamental plants. In short, they’re everything lavender hates. So if you want to use it to grow lavender, it needs to be amended first.

To create the best potting soil for lavender, you’ll need a few ingredients. But before you start, you need to gather a few materials. Grab a bucket or a pot large enough to mix the ingredients, a hand trowel, and some gardening gloves so you can break up the soil without getting too dirty. Now, here’s what you’ll need:

Mix 3 parts of potting soil with 1 part cactus potting soil and 1 part gravel, pumice, or fine rock. As you combine these ingredients, you’ll notice this mix is far more porous than straight potting soil. It stays nice and loose so air can get in and water can get out. Once everything is mixed well, you can add a handful of compost or worm castings for a tiny nutrient boost, but this step is optional.

In our experience, this recipe is by far the best potting soil for lavender. But it certainly isn’t the only recipe. You can substitute coarse sand for cactus soil, and clay pebbles or perlite for gravel. As long as your mixture contains roughly 60 percent potting soil, 30 percent well-draining sediment-type soil, and 10 percent rock, your lavender plants should be happy.

This potting soil is suitable for all varieties of lavender, including Spanish, English, and French varieties. If you have a bunch of lavender seedlings at your disposal, feel free to experiment with soil ingredients to see which combination works best for them.

What are the benefits of using potting soil vs native soil for lavender?

If you have sandy or loamy soil with the appropriate pH, you can use it to grow your lavender plants. But adding potting soil for lavender into the mix makes the ground surrounding the plant even more porous, improving drainage. And when it comes to growing lavender, that’s one of the most important factors — good drainage.

Because this potting soil mix has been formulated with lavender in mind, it’s designed to prevent compaction. Even over time, this mixture will never become so compacted that it’s too difficult for lavender roots to grow through. It stays loose, unlike native soils which can get tamped down with rain and regular foot traffic.

Additionally, native soils can be too nutrient-rich for lavender. Even if the soil drains well, if it’s full of minerals, your lavender plants won’t like it. By sticking to lavender potting soil, you have better control over your lavender plant’s soil conditions, so if the plant ever does experience any health problems (like graying leaves or foliage loss) you’ll be able to rule out the soil as a potential cause.

Does lavender grow best in pots?

While lavender is low-maintenance and more than capable of surviving conditions that would kill many other plants, it’s not very adaptable. Lavender has to have its ideal conditions or it just won’t grow well.

Keeping your lavender in pots allows you to use the best potting soil for lavender, which may not be ideal for your other herbs. Certain herbs, like oregano and rosemary, can tolerate lavender’s soil requirements. But basil and mint, on the other hand, require moist soils to thrive, so keeping these herbs together in the same bed can compromise their health.

Pots are also much better for drainage. Choose pots with holes in the bottom, and consider placing a few medium-sized rocks at the bottom to keep the soil loose enough for water to escape. Make sure to grow your lavender in a pot that is more than twice as big as the plant itself so it has plenty of room to grow.

Can you transplant your lavender plants into the ground?

Growing lavender in pots makes it easier to control its environment. You can pick it up and move it under a cover when it rains to prevent it from getting too much moisture. You can set it in between rows of your vegetable garden to help keep pests away. But lavender can be grown in the ground, too, as long as you incorporate lavender potting soil in the surrounding soil.

Start by digging a hole 24 inches in diameter by 18 to 20 inches deep. Break up the soil outside the lavender’s dripline so it’s easier for the roots to grow.  Next, take your homemade lavender potting soil and fill it in around the plant. Use it liberally to mix into the native soil. By the time you’re done, you should have 70 percent lavender potting soil mixed with 30 percent native soil.

Fill in around the plant and gently tamp the soil down to remove air pockets. Water your lavender lightly after planting to help the soil settle. If you’re planting more than one lavender, be sure to space the plants 2 to 3 feet apart so they have plenty of room to grow without interfering with each other.

How much lavender potting soil should you use?

Creating a potting mixture that’s uniquely suited to your lavender plant’s needs is one of the best things you can do to keep it healthy. But something that often gets overlooked is how much of that special potting mixture you use.

When planting lavender, keep the mixture away from the root collar — the point at the base of the plant where the stems begin to flare out into roots. Mounding soil or mulch around this critical point prevents the lavender from being able to breathe properly. Poor air circulation around the bottom of the plant encourages the development of powdery mildew and root rot, which can have devastating effects on the plant’s health.

When planting your lavender, whether you grow it in pots or in the ground, be sure to keep the soil surrounding it level. Don’t build it up like a pyramid around the trunk, and don’t make a well around the plant for water to sit in. Smooth everything out evenly leaving plenty of open space at the base of the plant. This will mimic the arid conditions of lavender’s native Mediterranean region, improving its chances of survival.

How does using potting soil for lavender improve performance?

Good soil alone isn’t enough to keep lavender plants healthy. They need lots of sunlight and weekly to bi-monthly waterings, too. But by using the best potting soil for lavender, you’ll be ensuring your plant gets everything it needs from the soil to grow well.

Providing your lavender with its ideal growing conditions speeds up foliage production, a sign of a healthy plant. And the healthier your lavender is, the more flowers it can produce. Using the best potting soil for lavender helps keep your lavender healthy and supports flower development so your lavender can attract butterflies, bees, hummingbirds, and other wildlife to your backyard.