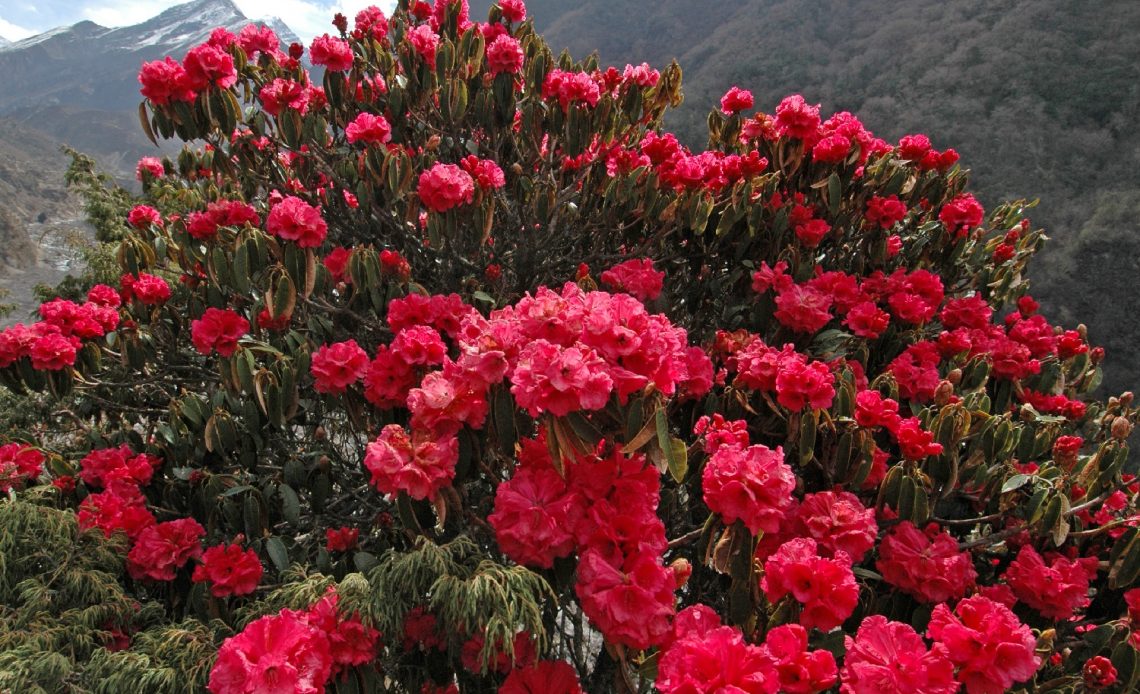 Rhododendrons are popular landscape shrubs that bloom from late spring to early summer, producing clusters of blue, red, purple, pink, or white flowers. This plant is great for gardens that receive a lot of sunlight, but they can attract wildlife who like to nibble on their foliage. This begs the question, do deer eat rhododendron?

Yes, deer love to eat rhododendron plants and can cause irreparable damage to them in a short period of time. If you have rhododendrons growing in your yard, you need to take extra precautions to keep them from falling prey to deer.

Why do deer eat rhododendron?

Deer hate strong-smelling, bitter-tasting plants, like lavender. But rhododendrons have a sweet, pleasant aroma and lots of tender, juicy leaves to munch on. The flowers are also delectable, being a good source of pollen and nectar, which provide deer with carbohydrates and protein.

Additionally, rhododendrons are large, so they give deer ample opportunity to graze. The largest rhododendron varieties can reach an impressive 30 feet in height. Other members of the rhododendron family, like azaleas, don’t grow to be quite that tall. These smaller bushes range in size from six to twelve feet tall. But they’re still large enough to feed a small herd of deer.

Deer love everything about the rhododendron, from its smell to its taste. However, it’s worth noting that food availability plays a role in determining how appetizing the deer will find these ornamentals. Lack of preferred foods, such as grasses and acorns, forces deer to branch out. If other foods are limited, deer are far more likely to chow down on your rhododendron plants.

Many deer love the taste of rhododendrons, and they love that they can stand in one spot and eat a lot before moving on to something else. But do deer eat rhododendron plants because they’re healthy? The answer depends on how you look at things.

Deer do get some nutrition from rhododendrons. They’re a good source of fiber, protein, carbohydrates, and moisture. But members of the rhododendron family are toxic to humans and animals, and that includes ruminants. So how do deer eat rhododendron plants without suffering from any bad side effects?

As opportunistic foragers, deer don’t always know when they’re going to get their next meal. So when they do find a food that they like, they tend to eat a lot of it. Consequently, deer can cause significant damage to a rhododendron plant in a matter of days.

Rhododendrons are considered to be highly susceptible to deer damage. They’ll nibble away small stems, break off flower heads, and graze on the whole plant until nothing but a small stub remains. Though other wildlife, like bees and hummingbirds, can visit members of the rhododendron family without damaging them, your plants will be much better off if you can keep the deer far away from them.

Rhododendrons are a fairly hardy plant. But whether or not they’ll be able to overcome deer damage comes down to how well-established their root systems are. If a rhododendron has had a season or two to acclimatize to its growing space and the roots are doing well, then there’s a good chance the plant will recover. But if the plant was already in bad health, either because the roots didn’t have time to develop or because the plant was suffering from nutrient deficiencies, it’s unlikely to grow back.

If deer have shorn your rhododendron plants down to nubs, take measures to keep them away, and continue to care for the plant for several more months. The quick loss of foliage can cause the plant to go into shock, and it may take a while to recover. If the plant doesn’t return after three months, it’s dead.

Are there any rhododendron species that are deer-resistant?

No plant is entirely deer-proof. And, unfortunately, rhododendrons are one of those plants that deer just can’t get enough of. But there are some varieties that seem to repel the deer more than others.

Carolina rhododendrons and catawba rhododendrons are also slight deer-resistant relative to other varieties. These, too, are high in tannic acids that deer dislike. Keep in mind, however, that just because the deer don’t like these varieties as much as other rhododendrons, they may still nibble on them. If you want your rhododendrons to thrive, it’s important to take other measures to keep the deer away.

How can you keep deer from eating your rhododendron?

Why do deer eat rhododendron plants? Because they can get to them! If you want to keep the deer from destroying your garden, the best thing you can do is build a fence around it. The average whitetail deer can jump six to eight feet in the air — and that’s from a standing position! So make sure your fence is tall enough to keep them out. Wood plank privacy fences work well, but special game wire can be purchased if you’d still like to see through your fence.

If you live in a neighborhood with HOA restrictions, building a fence may not be an option. So instead, try a homemade deer repellent using a whisked egg and a tablespoon of garlic juice. Spray this strong-smelling mixture onto your plants, and once the deer get a whiff of it, they’ll look for something else to eat. Using a cheese grater to grate Irish Spring soap near your plants will ward them off, too.

Motion-detecting deer-repelling sprinklers are fantastic for scaring deer off. These sprinklers are loud and unpredictable, so deer can’t figure them out. It doesn’t take long before the sound of water starting to spritz out of a sprayer is enough to shoo them off.

The next time you clean out your hairbrush (or those of your cats and dogs) throw the hair out near your plants. Interestingly, deer are repelled by hair. As prey animals, they don’t like to hang out where predators have been. This is the fastest and easiest way to keep them away, plus it costs nothing.

Do deer eat rhododendrons when they’re growing near deer-resistant plants?

Companion planting is an effective strategy for keeping deer away from your flowers. So grow your rhododendrons next to deer-resistant plants to ensure their safety. Deer hate plants with fuzzy foliage, like lamb’s ear and lavender. They’re both excellent choices for companion planting.

Deer also hate fragrant herbs, like chives and garlic. Growing these plants in front of your rhododendrons will encourage the deer to keep their distance. Other plants that deer dislike are ferns, elephant ears, beebalm, and coleus.