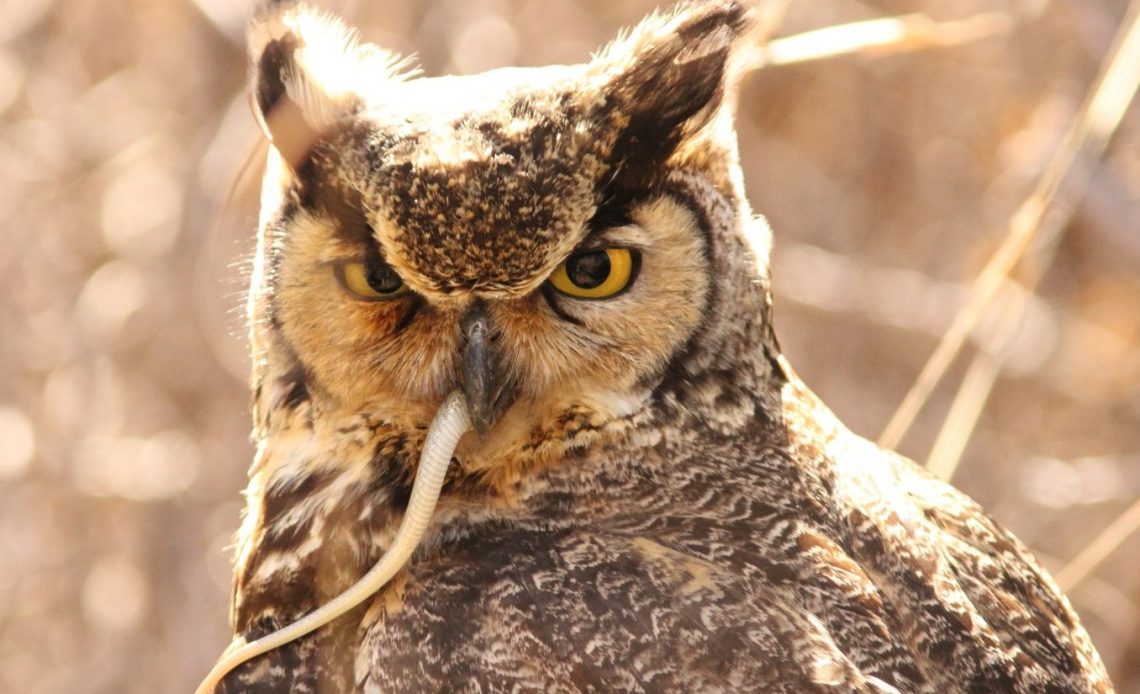 You know, the outdoors really are great, but the fact that so many creepy crawlies hang out there, too, is a major bummer. If you’re more of an indoorsy person, the thought of snakes lurking in your backyard may be preventing you from enjoying it. The good news is that most predatory birds prey on these slithering pests. Falcons, hawks, and eagles are happy to snack on snakes. But do owls eat snakes, too?

Yes, owls eat snakes. Owls swallow their food whole, so snakes are some of the easiest foods for them to eat. However, owls do not eat snakes exclusively. As carnivores, these predatory birds rely on many protein sources to stay healthy.

Why do owls eat snakes?

Owls are opportunistic hunters. Even though every owl species has its preferred prey, they will still hunt for animals they don’t like as much when food is limited. Plus, they’re always on the lookout for animals that they think will make for an easy meal. Some larger owls will even attack cats and small dogs if they think it’ll be worth their while.

The main reason owls eat snakes is that they’re usually pretty easy to catch. Owls don’t like to go after prey if they think it will fight back. Even though owls are fearsome predators, they rely heavily on the element of surprise. Typically, an owl’s prey is too stunned to fight back. And this works in their favor because if owls had to defend themselves against every animal they hunted, sooner or later, they would become the prey. But small to medium-sized snakes can easily be dominated by an owl, and, therefore, are not a serious threat.

Additionally, owls spend a great deal of time observing their prey before they strike. By watching adult snakes slither around, owls are sometimes able to track down whole nests to feed on. Baby snakes are no match for an owl, and these nests make for quite a meal since most snakes lay 10 to 30 eggs in a clutch. For an owl, feeding on a den of helpless little snakes beats chasing down energetic squirrels and rabbits any day.

Of course, some owls may seek out snakes because they like the taste. Snakes are a decent source of protein that some owls prefer over other food choices. If the snake population is booming, an owl may develop a craving for them over time. And if an owl has gotten used to consuming them regularly, this increases the likelihood that they will watch out for snakes.

Do all owls eat snakes?

Owls prey on snakes by catching them and killing them quickly. This is true for almost all of their prey. They’ve got to neutralize the animal fast to prevent it from fighting back, and they do this with the help of their strong beaks and razor-sharp talons. If they didn’t kill the snake quickly, it could constrict them or bite them. Depending on its size, the snake might even try to eat them, instead.

Great horned owls, barred owls, and Eastern and Western screech owls will frequently feed on snakes. Why do these owls eat snakes? Well, because they’re fairly large in size, so it’s easier for them to do so. Great horned owls, in particular, can become obsessed with capturing snakes, even the ones that are too big for them to handle. More than one of these great birds has died from the ensuing struggles, but the snakes in question seldom fare any better.

Though larger owls can kill snakes that reach an amazing seven feet in length, they usually prefer smaller ones. Especially if they have a nest full of owlets. Small snakes are perfect for feeding baby owls. They’re tender, tasty, and nutritious — exactly what young owls need to grow to be big and strong. And, as any parent will tell you when you’re trying to get your kids to switch to solid foods, you’ll give them whichever meals they like best to help them along!

Now, smaller owls, like Northern pygmy owls, may feed on young snakes if and when they can. But they’d have a tougher time trying to wrestle a three-foot-long grass snake than one of their larger cousins would. Burrowing owls are also fairly small in size. Since they spend so much of their time on the ground, it’s easier for them to locate snake nests to feed on. But, for the most part, smaller owls prefer not to mess with snakes.

Which snakes do owls like to eat the most?

Most owls do not actively seek out snakes. While snakes can be a staple in an owl’s diet, they’re certainly not a necessity. If there aren’t any snakes around, owls are just as happy to hunt for alternative food sources. But they will swoop down and snatch them up when they can.

Owls mostly prey on rats, voles, gophers, mice, and toads. These are small creatures that are easy to overpower and even easier to swallow. Larger owls will go for bigger prey, though. These birds won’t hesitate to attack raccoons and fox kits. An owl may feed on animals many times its own size, such as deer and hogs, provided these animals are already dead. Although owls aren’t scavengers by definition, the fact that they’re opportunistic feeders means they’ll take advantage of whatever food is available, even if that food is roadkill.

Given a choice, owls prefer nonvenomous grass snakes. Garter snakes, smooth green snakes, and ribbon snakes fit the bill. While these snakes can grow to be about three feet long, they never get too big around. They lack the muscle mass that larger-bodied venomous snakes possess. So if these snakes fight back, the owl can easily restrain them.

Owls will also prey on chicken snakes and rat snakes. These snakes can grow to be as big as most venomous snakes, so, again, owls prefer to eat the young ones. But, if food is hard to come by, and an owl feels it can overpower an adult chicken or rat snake, it may well try to do so.

Is it safe for owls to eat venomous snakes?

Owls can eat venomous snakes as well as nonvenomous ones. But they’re more likely to play it safe where venomous snakes are concerned. For instance, an owl may try to attack a large adult rat snake, but it’s likely to steer clear of a venomous snake of the same size. And we can’t say we blame them!

Owls will prey on copperheads, coral snakes, rattlesnakes, and most other venomous snakes. But these snakes are also predators themselves, and they’re just as happy to feed on owls if they get the chance. For this reason, most owls avoid preying on adult snakes and choose to eat only the young ones, instead.

Feeding on venomous snakes can be risky for an owl because they are not immune to snake venom. If they get bit, they’re in serious trouble, just like everybody else. But owls can consume snake venom without suffering any ill effects. Owls can also eat other venomous creatures, like scorpions, spiders, and wasps. As long as they don’t get stung, the venom won’t hurt them.

Other birds of prey feed on snakes as well. Hawks, eagles, and falcons enjoy a nice, tasty snake every now and then. These birds very cleverly rip the heads off of venomous snakes before consuming them to avoid literal food poisoning. Guess they’re not so bird-brained, after all.

How can you attract more owls to your backyard?

It’s so much easier to enjoy your backyard when you know there aren’t any snakes hiding out there. If you want your neighborhood owls to give you a hand when it comes to pest control, there are a few things that you can do to entice them to pay you a visit.

The first thing to do if you want to attract owls is to install nesting boxes. These birdhouses are simple to build, you could easily make two or three in an afternoon. Commercial nesting boxes are available, too, if you’re not too confident wielding power tools. Offering your owls some free real estate is sure to catch their attention — especially during the winter months.

If you have the space for it, consider digging a pond in your backyard. Ponds draw all sorts of wildlife, from insects like dragonflies and beetles to land-dwelling mammals, like deer and raccoons. Ponds are great for bringing in plenty of potential prey for owls, including frogs, crawfish, and, yes, snakes. If you can’t dig a pond, providing owls with a reliable source of water can still go a long way toward bringing them to your backyard.

Owls prefer wooded areas that have no signs of human meddling. They like dead, hollow trees, and the leafless, decaying branches most people would consider unsightly. If you want to bring more owls to your yard, you need to allow nature to take over as much as possible. Of course, keeping your yard mowed is still important. Not only does this help keep snakes away, but it makes it easier for owls to hunt as well.

If you keep your yard lights on at night, stop. Owls do most of their hunting at night. They need the darkness to successfully capture their prey, and flood lights and porch lights can impede their efforts. Also, take measures to ensure owls and other birds can see your windows. Large windows confuse birds, who may injure themselves by flying into them. Use flash tape strips or netting to keep the birds from hitting glass doors and other reflective objects.

So, do owls eat snakes? Yes, they do, and they love them! Taking steps to encourage owls to visit your backyard is a fantastic way to eliminate these potentially deadly reptiles from your outdoor refuge so you can continue to enjoy it all year round.