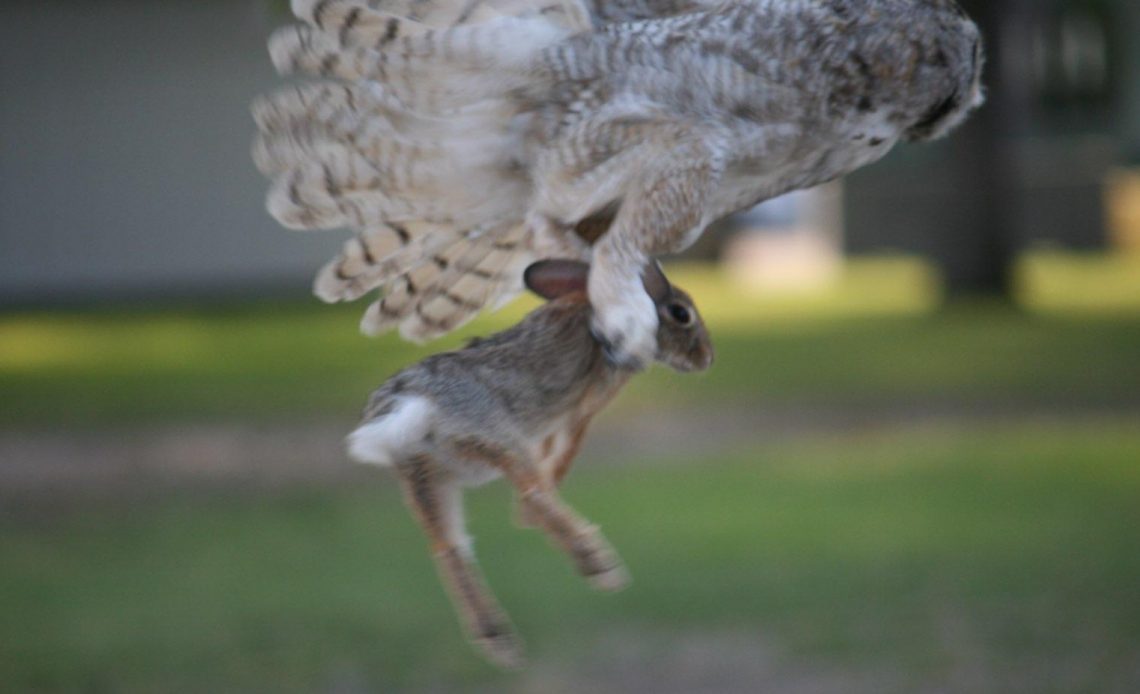 Rabbits play an important role in the ecosystem. By eating weeds and other plants, they help control the growth rate of local vegetation. They can also be raised for meat and wool production. But rabbits are prey animals who may attract predators to your backyard. Wolves, coyotes, and foxes frequently feed on rabbits. But do owls eat rabbits, too?

Yes, owls eat rabbits. In fact, rabbits make up a large part of many owls’ diets. These predatory birds will actively hunt for rabbits — which may be a good thing or a bad thing depending on the goals you have for your backyard.

Why do owls eat rabbits instead of other animals?

Owls will hunt for many different animals, including rats, frogs, lizards, bats, snakes, small birds, and squirrels. Each species has its own favorites, but owls are opportunists when it comes to hunting. They’ll take whatever they can get, and the easier prey is to catch, the better.

Owls like to go after small animals because, even if they do struggle, they won’t win. And no matter how much of a fight they put up, they’ll never be a threat to the owl’s safety. An owl won’t suffer life-threatening injuries from a fight with a frog or a mouse. Hunting small animals is a safe bet for owls.

But there is a downside to small prey, and that is that, well, it’s so small! Owls have to eat many small animals to feel full. This means they have to spend a lot of their time hunting. And the longer they hunt, the more energy they expend, which means they need even more small animals to fuel them up. It’s a never-ending cycle.

Medium to large-sized prey may be harder for owls to catch, but they provide a much bigger payoff. Rabbits are fairly easy to hunt, especially when cornered or in a large open area with limited cover to duck into. Owls are also happy to prey on baby rabbits because, even though they’re small, they’re often born in litters of six or so. Half a dozen small rabbits is a decent meal for a hungry owl.

Do all owls eat rabbits?

Every type of owl is known to prey on rabbits, from the biggest Blakiston’s fish owl to the smallest Whitney’s elf owl. Rabbits are an excellent source of protein, they reproduce quickly, and they can be found in urban as well as rural areas, and in deserts as well as forests. Their ready availability makes them a popular target for owls all over the world.

Large owls, like great horned owls and barred owls, are big enough to catch adult rabbits. Of course, they prefer older, injured, or sick rabbits because they’re easier to catch. But because rabbits make for such a nice meal, these big birds stalk them regularly.

Smaller owls, like Northern pygmy owls and burrow owls, aren’t big enough to take on an adult rabbit. But they’re happy to prey on baby rabbits. They may also feed on the carcass of an adult rabbit if they stumble across one.

Which types of rabbits do owls like to eat?

Owls usually prey on cottontail rabbits. You know, the cute, adorable, cuddly ones that you want to pet? Yeah, those. Owls don’t have warm, fuzzy feelings for bunnies the way we do. We guess woodland creatures only get along in fairytales. Real-life mother nature is hardcore.

Owls will feed on whichever types of rabbits are available to them regionally. Some owls will try to catch jackrabbits if they can — which technically aren’t rabbits, they’re hares. Jackrabbits are so much bigger than your typical run-of-the-mill rabbits that it can be tough to believe they’re even related.

Jackrabbits live in deserts, foothills, and plains. These animals are survivors, thriving in desolate, arid places where many other animals would die. They’re capable of reaching speeds of 30 miles per hour and can use their powerful hind legs to jump 20 feet. Unfortunately, jackrabbits have poor endurance, so they’re easier for owls to capture than you might expect.

Jackrabbits are such an important factor in some owls’ diets that the local jackrabbit population can actually influence the owls’ breeding responses. In other words, the more jackrabbits there are, the better the breeding season for the owls that prey on them.

Owls also won’t hesitate to catch domestic rabbits. In fact, preying on rabbits in a cage is like shooting fish in a barrel for owls. If you raise rabbits on your hobby farm, you need to take measures to ensure they’re safely out of the reach of any birds of prey.

How can you keep your domestic rabbits safe from owls?

If you raise rabbits in your backyard, then you know just how tough it can be to protect them. Fortunately, keeping your rabbits safe from owls is much easier than protecting them from other predators, like foxes, who can use their teeth and paws to pull cages apart. Even though larger owls can exert 30 pounds of force with their powerful claws, their ability to tear through protective caging to get to rabbits is limited.

First, take a look at your cages. Are they intact? How sturdy is the wire? If the wire is weak enough that you can bend it with your hands, then owls will be able to break through it. Invest in or build cages with heavy-duty wire. Chicken wire is too thin and flimsy. Instead, look for fencing that is specifically designed for rabbits. Horse fence panels are even stronger, just make sure your rabbits can’t fit through the holes between the wires.

Keep your cages up off the ground. Owls will walk around to search for prey, so make sure your cages aren’t easy for them to reach. Lock your rabbits back up in their pens by late afternoon so they’re safe and secure by the time the owls start their evening hunt.

Sturdy cages will help keep your rabbits safe. But owls can still reach through the wire to get to your bunnies. So put up bird netting around the cages several feet away from them to prevent owls from getting too close.

If you let your rabbits out during the day, be sure to fence their run. You can use rabbit wire or horse fence panels for this as well. Secure panels to the top of your rabbit run with steel fence wire to prevent owls from swooping down into them. Anything above 14-gauge will work fine, just be sure to wear work gloves. Wire can do a number on your hands.

It’s also important to store your rabbit’s feed where mice, rats, and other critters won’t be able to get into it. While these rodents may not be a direct threat to your rabbits’ safety, they can attract owls. Once the owls get their fill of the mice, they’ll turn their attention to your bunnies, and that’s no good. So keep a tight lid on your feed containers.

How can you prevent owls from eating wild rabbits?

Rabbits eat plants. It’s kind of their thing. But not everyone appreciates having their vegetable gardens raided and their expensive landscaping ruined. If you want the rabbits out of your garden, you may not be inclined to scare the owls off. In fact, you’re probably more interested in attracting more owls to your backyard!

But, if you’re like us, and you just can’t help but be partial to those pesky little rabbits, there are some things you can do to keep the owls away. Start by leaving your yard lights on overnight. Owls prefer to hunt in the dark. They won’t want to hang out in your garden when it’s all lit up.

Windchimes can also be useful, especially if you hang up more than one set. Owls rely on their keen sense of hearing to track down prey. If their hearing is obstructed by other noises, they’ll fly away in search of new hunting grounds.

You can try stretching some fishing line overhead to deter predatory birds from flying into your yard. If you have a tall wooden fence, run several strands of fishing line from one side to the other. Hanging pie plates or old soda cans from it will make noise to scare the owls off. They’ll also reflect the sunlight, confusing any owls who may be hunting during the daytime.

Sometimes just staring at an owl is enough to get it to leave. Owls stake out their own territories, and they don’t like competition. By staring them down, you’re letting them know that they’re trespassing in your space. Doing this every time you see an owl can make a huge difference over time — but it does require being proactive, and not everybody has time to drop everything to get into staring contests with birds of prey.

Clear out any brush piles where rodents and small birds may nest. Owls are always on the lookout for prey dens, so make sure there aren’t any in your backyard. Cover up any holes in your home or outbuildings to prevent owls from exploring them, as well. Eliminating potential nesting sites can make a big difference.

Try to walk around your yard at different times of the day so the owls know you’re always around. And don’t be afraid to be noisy. If you’re loud and unpredictable, the owls won’t be able to figure you out. As a result, they won’t feel that your property is a safe place to hunt, and they’ll find someplace else.

If you’re wondering “why do owls eat rabbits?” the answer is simple. It’s because rabbits are large prey that is relatively easy for owls to catch. But whether you raise rabbits or just enjoy watching the wild ones, there are steps you can take to keep owls away so your bunnies can continue to enjoy your wild yard.