Do Owls Have Eyeballs? 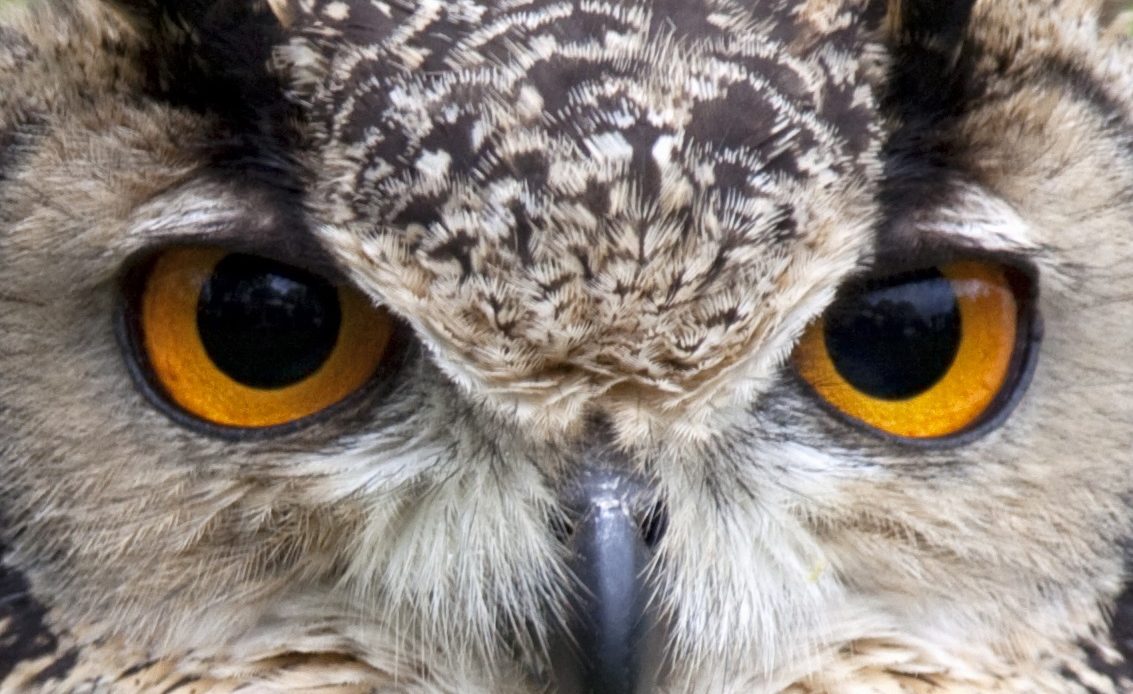 Owls are seriously fascinating creatures. Not only can they rotate their necks and heads around to spot prey, but they’re also able to see up to a mile away. How is this possible? Do owls have eyeballs, or something completely different?

Owls don’t have eyeballs, at least based on the basic definition. Instead, they have elongated ‘tubes’ that allow them to see across amazing distances. Owls, as fantastic predators, need complex visual apparatus to keep at the top of their food chain.

Why are owl eyes tube-shaped?

Owl eyes have tube-shaped eyes for a few reasons – for example, their small skulls don’t allow for traditional eyeballs to expand. This means owl eyes are fully expanded at all times, allowing for an exceptional field of vision.

Cornea expansion is crucial for nocturnal animals to see in the dark. They are among very few animals with tube-shaped eyes, with some species of fish also evolving this way for night hunting.

These tube-shaped eyes have wide-dilating pupils, which expand as much as possible to take in light from dark conditions. They also possess tapetum lucidum – which are retina layers that reflect light. These eye adaptations allow owls to see for long distances under cover of darkness.

Tube-shaped, night-adjusted eyes enable owls to find small creatures such as mice, rats, and shrews -and larger prey such as rabbits and squirrels – long after dusk. Many owls will even eat bats as they come out at night and other birds that may be asleep in their nests.

How can owls see without eyeballs?

Like humans, owls benefit from the visual depth that arises from having two eyes at the fronts of their heads. Most other bird species see the word one eye at a time, each positioned on either side of their skulls. Although owls don’t have ball-shaped eyes, they have binocular vision, which helps them adjust for distance when attacking prey.

Cranial movement with tube-shaped eyeballs is only possible through body adaptation elsewhere – especially as owls need to be as silent as possible when scanning for prey. Instead of moving their whole bodies to scan an area, their necks rotate, meaning their eyes stay stationary.

Owls can rotate their necks and heads up to 270 degrees, allowing them to fix in one place (ideally high up), silently scoping out unsuspecting prey below. Thanks to their tube-shaped eyes, owls can hunt for food silently from above.

Owl skulls have sclerotic rings that fix their eye tubes into position – they can’t move their eyes independently at all and are always looking straight forward. Whereas human eyes can roll, scan up, down, and to the sides, owls move their entire heads to achieve such angles.

Do owl and human eyes have anything in common?

As well as possessing binocular vision, owls and humans both have eye cells that respond to light, movement, and color. They have rods to pick up on motion and light, while cones account for color – and they have around twice the number of rods to cones, allowing for incredible movement detection in low light.

That’s where the similarities end – as owl eyes make up much more of their total body mass comparable with humans. It’s thought that up to 5% of an owl’s total mass is eyes alone – in human beings, the ratio is negligible.

Owls also have three eyelids per eye to our single set. They have translucent membranes that open and close horizontally. These are useful in helping owls to stay alert and focused during hunting, as they protect the eyes from any intrusive dirt, grit, or other debris.

Are owls blind during the daytime?

No – owls have full sight during the day, despite the common myth! Their eyes are simply adapted to provide exceptional night vision, as it’s extremely rare they will be active during daylight hours. For example, species such as the snowy owl have similarly adaptive eyes in full sunlight.

Interestingly, all owls have independent pupil control – meaning they can contract and expand their eyes to let light in and out. This control works somewhat like a camera or telescope lens that you can adjust to your environment to better focus. This means, in many ways, owl eyes can adjust better than human eyes to strong light.

Can owls see all the way around?

It’s a myth that owls can see 360 degrees – even these birds’ amazing necks have limits! As mentioned, they can rotate for a total of 270 degrees, which accounts for 135 degrees from side to side, based on a front-facing position.

Owls have twice the number of neck vertebrae than most birds, allowing for incredible flexibility. They have adaptive blood vessels to prevent their brains from losing blood if their necks lose circulation.

The owl is also one of the best-protected against neck damage thanks to its evolved flexibility. Owls have built-in vessel cushions that protect neck vessels if they need to swivel around suddenly.

Owls can also see up and down thanks to their necks’ adaptability to rotate in either direction by 90 degrees.

Owls can see colors, but their range of reception is fairly limited. This is because they have far fewer cones than rods in their eyes – meaning their visual equipment fine-tunes to light rather than color.

Many owls only see in monochrome, though there are exceptions. This adaptation may have occurred as owls don’t need to see colors to hunt effectively. It’s more important that an owl can see for long distances in the dark.

Can owls see anything up close?

Owls can see some objects up close, but they are mostly far-sighted. This means that due to their long-range sight, they can struggle to focus on anything in front of them.

Intriguingly, owls have further adapted for far-sightedness while hunting. Upon swooping down on fleeing prey, owls can use feathers on their talons and beaks to feel for any food they may have captured. These feathers are known as filoplumes, effectively allowing the medium of touch to make up for a gap in vision.

Can owls see with just one eye?

An owl can hypothetically still see with just one eye (if, for example, it is injured), but such an injury will significantly impair its hunting ability. It won’t have the same depth of vision as others, and it won’t have accurate enough vision to hunt regularly.

Unfortunately, this means most owls that lose an eye (or use in one) need immediate rehabilitation and likely won’t be safe to release back into the wild.

Do all owls have the same color eyes?

Eye color can vary from species to species, but interesting research suggests eye color may correlate with when an owl hunts – at night or during the day.

For example, results show that many nocturnal hunters have darker eyes, whereas lighter-eyed owls appear to favor daytime hunting.

Do owls rely on their eyes alone when hunting?

Owl eyes are fantastic for spotting prey, but as they get closer to their food, they lose focus – which is why they have filoplumes and asymmetrical ears.

Unlike humans, owls have ear holes positioned in different spots on either side of their heads and holes of different sizes. These asymmetrical ears allow owls to better judge where sounds may be coming from. They ‘tune in’ noise to know when they’re on target – providing a radar of sorts to allow for greater accuracy while scouting.

Essentially, owls use their unique eyes to search far and wide for a ‘target’, and their ears to ‘lock on’. Both adapted features allow these predators to hunt and feed almost silently.

Do owls have the best vision of all animals?

‘Best’ is a relative term – owls have unbeatable night vision, for example, thanks to their reflective retinas, tube-shaped eyes, and a high number of light-receptive rod cells. No other animal can control its light reception the same way as an owl can!

However, other animals have ‘better’ vision in other categories. For example, mantis shrimps have highly complex photoreceptors and independently-moving eye stalks. The bluebottle butterfly, too, has fantastic vision – it can see five times the number of colors we can, and more than any other animal. Owls, meanwhile, have even poorer color reception thanks to low cone numbers.

Can an owl see me if I enter its habitat?

As owls are far-sighted, it’s unlikely they will be able to see you clearly if you get too close – but they can spot intruders into their home sites from long distances away and hear when you are approaching.

Despite their far-sightedness, owls have adapted to be highly sensitive to anyone (or anything) getting too close to their nests. They won’t necessarily know you are human – and may attack you if they perceive you as a threat. Before this happens, most owls will emit ‘warning’ hoots to encourage you to turn back.

Owls don’t have eyeballs, but they have complex eyes that allow them to perceive light and distance much more accurately than us. This helps them to stay the apex predators in their habitats – silently spotting prey from afar and swooping down to feed.

All owls in the US and beyond have the same tube-shaped eyes – but some will vary in color and adaptation to daylight, depending on when they hunt.