Do Owls Lay Eggs Or Give Birth To Live Babies? 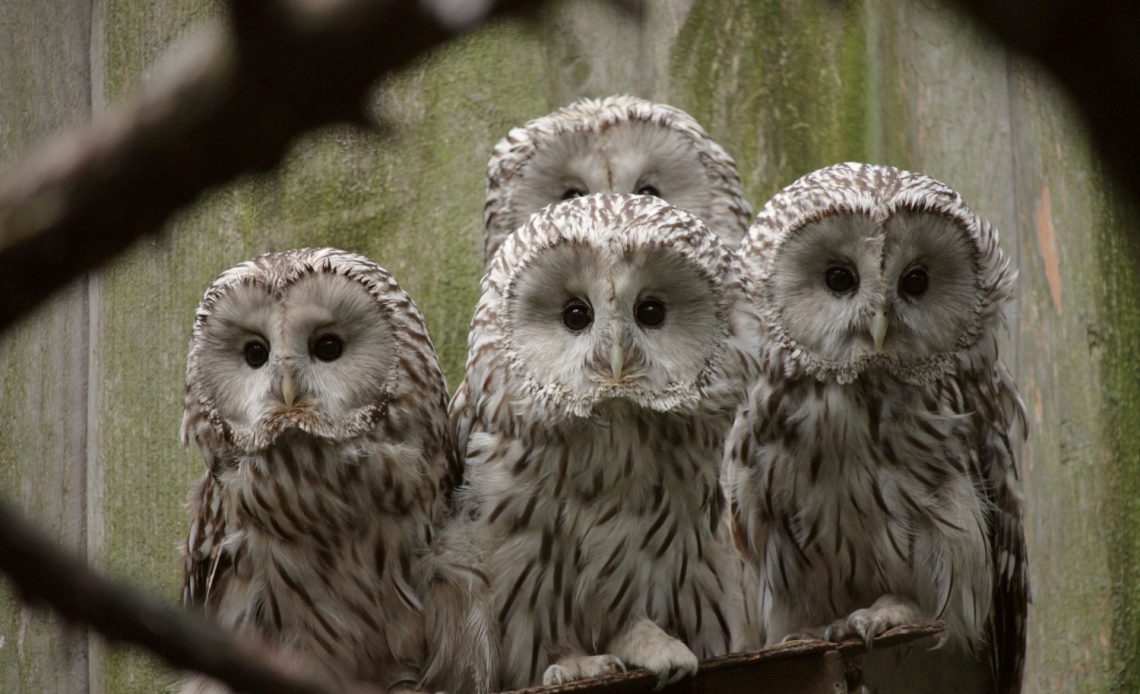 Most owls mate for life, but mated owl pairs don’t spend all of their time together. When they’re not actively raising their young, owls are pretty independent, occupying the same general region, but hunting on their own. Owls come together during the nesting season to mate and rear their young. But do owls lay eggs, or do they give birth to live babies?

Owls are not mammals, they’re birds, and as such, they lay eggs. How many eggs an owl lays largely depends upon its species, but external factors, such as food availability, also play a role. Owls typically lay their eggs in spring or summer, though owls may nest from late winter to early fall.

When do owls lay their eggs?

Most owls nest anywhere from spring to fall. But this varies depending on species, subspecies, and climate. For instance, barred owls are known to nest anywhere from January to June in Texas but typically nest from March to August throughout the northern portion of the United States.

Great horned owls prefer to nest in the fall and winter months. While these owls were once believed to be monogamous, a male was observed to have two females nesting simultaneously in 2018. These owls choose mates from late December to January in the winter and begin their nests the following October to December.

For most other owl species, courtship begins in February with female owls laying their eggs in March. Females do not leave their nests during this time and rely on their mates to bring them food.

Where do owls lay their eggs?

Most owls do not build their nests. Instead, they live in tree hollows, fallen logs, rock crevices, cactus hollows, and nests left behind by squirrels or other birds of prey. Owls that are tolerant of humans, like screech owls and barn owls, may live in man-made structures, including metal tubing, sheds, well houses, and abandoned buildings. Owls typically return to their nests year after year.

Burrowing owls live in prairie dog dens and old ground squirrel burrows, though they will dig homes for themselves if these options aren’t available. Burrowing owls are some of the few that add materials to their homes, piling dung in the entrances of their burrows. This strategy offers two distinct benefits. First, the dung works to mask the smell of baby burrowing owls, protecting them from nearby predators. And, second, the dung attracts insects, making for an easy supper for nesting female owls.

What color are owl eggs?

Owl eggs are white. This is because they’re incubated non-stop by females, who use their dense plumage to keep them warm. Because the eggs are constantly sheltered, they’re protected from sunlight, and never develop pigmentation.

How big are owl eggs?

The tiny elf owl, which grows to a maximum length of 7.6-inches, lays proportionately tiny eggs, measuring only 1.14 by .98 inches in size. Barn owl eggs are relatively small compared to the mother bird’s size. These owls measure 15 to 17-inches in length, but their eggs are only 1.5 inches long and 1.3 inches wide. Great gray owls, the largest owls in the United States averaging 24 to 33 inches in length, lay more sizeable eggs, at 2.11 inches long and 1.68 inches wide.

Unlike backyard laying hens, who lay eggs 5 to 7 times per week whether they’ve mated or not, female owls only lay eggs once they have mated. Owl eggs are fertilized within the ovary before females lay them. If no fertilization occurs, there’s no need for females to lay any eggs. So, when males are not around to court with, the ovaries of the female owl shrink, downregulating their fertility until their mate returns.

Most owls breed annually, typically just once per season, although some owls may mate twice if their first clutch is unsuccessful. If food is abundant, female northern saw-whet owls will leave their original mate to tend to their young and start a second family with a new mate.

Spotted owls do not breed every year, so females may go several seasons without laying any eggs. Barn owls, on the other hand, can lay eggs up to three times in a single year.

How many eggs do owls lay at a time?

Burrowing owls, by contrast, have much larger clutches, averaging between 6 and 12 eggs. But barn owls can lay anywhere from 2 to 18 eggs, though the average clutch is between 5 and 7. Owl eggs must be incubated for weeks, as warmth is critical to embryonic development. Owl eggs typically hatch in 26 to 35 days.

When food is scarce, owls will lay fewer eggs, with some owls choosing not to breed at all. However, when prey is abundant, owls will lay more eggs, and they may do so over a longer period. When there’s plenty of food to go around, an owl may lay a clutch so large that eggs continue hatching for two weeks. It has also been observed that owls living inland and closer to the poles produce larger clutches than owls living outside these regions.

What are baby owls called?

You might think that baby owls are called chicks, and you’ll probably see them referred to as such in birding books and scientific literature. While this title is not technically a misnomer, baby owls are traditionally called owlets.

Wise and intimidating as they may grow up to be, all owls start off looking like cuddly balls of fuzzy white fluff. Owlets are born with fine, delicate downy feathers that are various shades of white. As owlets turn into fledglings, they begin to develop adult feathers on their bodies, retaining a few wisps of baby feathers on their heads. An owlet’s baby feathers are usually totally replaced by adult plumage in 65 days.

When owlets hatch, they’re blind, and because it takes so much effort for these tiny babies to burst through their eggshells, they’re usually so exhausted from the hatching process that they can’t even move. It takes about three days for baby owls to start shifting around. At six days, owlets can regurgitate owl pellets, and after two or three weeks, young owls eat on their own, feeding on whatever prey their parents carry back to the nest.

How do owls take care of their babies?

Regardless of species, owls are generally capable, doting parents. Mated pairs work as a team to incubate, feed, and protect their owlets from predators. While females spend all of their time incubating their clutch, males work double time catching enough prey to feed themselves and their mates.

Once the eggs hatch and owlets grow strong enough to move around, females will leave the nest and hunt as well. In the case of the northern saw-whet owl, the female owl may take this opportunity to bow out, leaving the male to care for the brood to find a new mate and lay a new clutch. But female members of other owl species, like barred owls, great horned owls, and barn owls, will stick around, hunting to feed their original clutch and protect their young as they grow.

When do baby owls leave the nest?

Owls care for their young until they learn to fly and hunt on their own. When owls leave their nests depends on the species. Flammulated owlets stay under the care of their parents for only 25 days, but snowy owlets, barred owlets, and great gray owlets usually aren’t prepared to leave until the 10-week mark. Great horned owls care for their young the longest, with owlets still begging their parents for food at 6 to 9 months of age.

How can you encourage owls to lay their eggs in your backyard?

Now that you know all about owls and their eggs, you’re probably wondering how you can attract more of these fascinating birds to your backyard so you can watch owlets hatch and mature firsthand. The best way to encourage owls to raise their broods on your property is by installing an owl box. Be sure to situate your owl box facing south or east, to shelter the birds from the elements. It’s best to install your owl box in the fall to give mated pairs plenty of time to find it before starting their clutch.

If your region is populated with larger owls, like great horned owls and northern hawk owls, you may be better off installing a nest cone. These man-made nests give large owls plenty of space to raise their equally large owlets. Nest cones are easy to build, and can provide these birds of prey with a suitable home when other nesting sites are hard to come by.

For best results, we recommend reading up on the owls that are native to your region. Providing housing that suits the needs of your local owls is the best way to catch and observe these enchanting birds of prey.