What Direction Should An Owl Box Face? 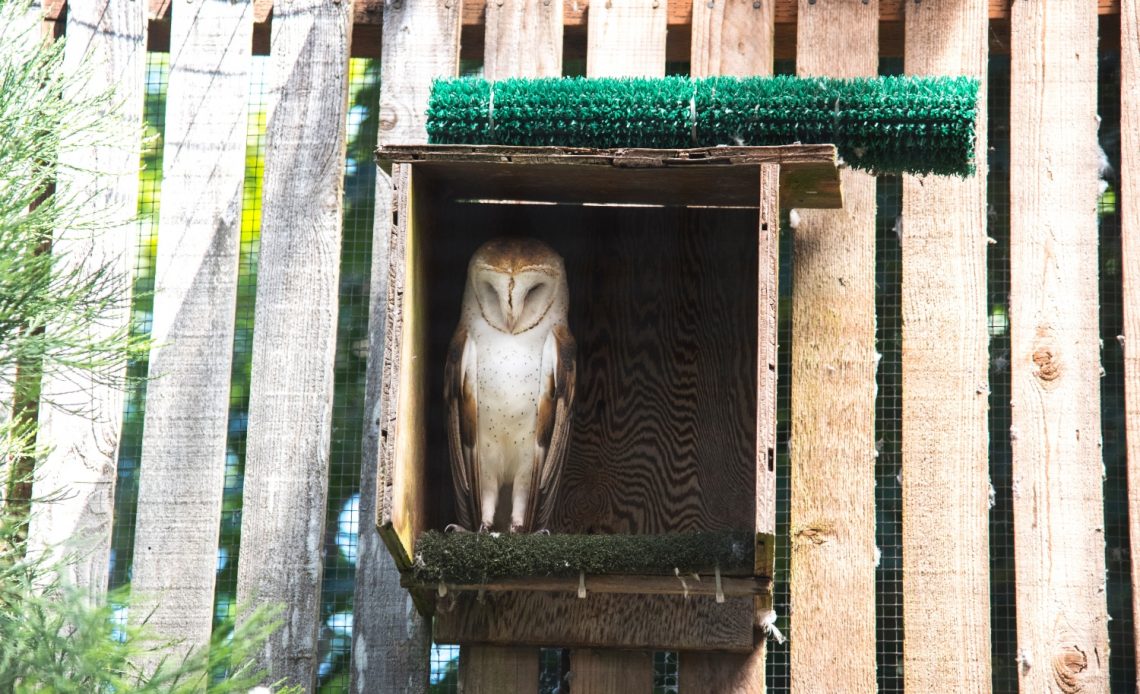 Installing an owl box on your property is perhaps the single best thing that you can do to attract more of these fascinating birds to your backyard. But how you put up your owl box has a huge impact on whether or not it’s an attractive nesting site from an owl’s perspective. What’s the best kind of owl box to install? How high up should it be off the ground? And what direction should an owl box face to make it more hospitable for these avian visitors?

Owl boxes should be placed on the eastern or southern side of a tree. Placing owl boxes to the east allows them to catch the morning sun’s warm rays while installing boxes on the south protects resident owls from the bitterly cold north winds of winter.

What kind of owl box should you install?

Which kind of owl box you should purchase (or build) depends on which kinds of owls live in your region. Barred owls, screech-owls, and great-horned owls prefer to live in upright boxes with a single hole in the center near the top of the box. This mimics the tree hollows they usually call home.

Other owls, particularly barn owls, prefer their nesting boxes to be spacious and flat, so they have plenty of room to spread out. Installing the appropriate box for your local owls is critical to success. So take a moment to learn about the owls of America and get better acquainted with the types of owls that live in your area. That way, you can provide them with boxes that suit their needs.

Regardless of which types of owls you’re trying to attract, your nesting box should be built out of weathered, untreated lumber. Pine, oak, and cedar woods all work well because they tend to be rot-resistant. Use galvanized screws to build the box and secure it to a tree. It’s also important to make sure the roof of the box has hinges so it acts as a lid in case you ever need to clean it out.

Where should you install an owl box?

Most owls like to roost in tree hollows, preferably in trees that are situated on the edge of a forested area looking out over a large, grassy field. This provides them with an ideal place to hunt. They can get a clear shot at a squirrel, songbird, or rabbit on the ground below, then swoop right back up to their nest again to enjoy their meal.

For best results, install your owl box on a treeline where woods meet open space. Providing the owls with a convenient hunting place will make your nesting boxes more appealing to them. If you don’t have any trees on your property, you may still be able to attract owls by hanging your nesting box from a pole. Nesting boxes should be placed 10 to 15 feet up so owls can see the ground below and listen for prey.

How far apart should you space nesting boxes?

If you plan on hanging more than one owl box, you’ll need to space them far enough apart. Most owls are aggressive toward outsiders. Owls usually mate for life, and a mated pair will go to great lengths to defend their territories. So if you want to play host to more than one owl family, you’ll need to keep plenty of distance between nesting boxes.

It’s best to space boxes about 1,000 feet apart on all sides. If you have a large property, you may be able to install several boxes — and doing so can greatly boost regional owl populations. But if you have a small yard, install one box to prevent competition.

What direction should an owl box face?

Fearsome and deadly as they are, owls are creatures of comfort. While owls living in the northern portion of the United States, like the great gray owl, have dense plumage that makes it easier for them to survive cold temperatures, they still prefer their roosting sites to be out of the weather as much as possible.

If you have harsh winters with cold north winds, then it’s best to situate your owl box so that it’s facing south. This helps to keep the bone-chilling cold out of the owl’s nest, so it doesn’t have to expend so much energy to stay warm.

Alternatively, if you live in a more temperate region, or in a wooded area that’s protected from strong gales, you can situate your owl’s nesting box facing east. This will also help resident owls stay warm because it allows the nesting box to catch the morning sun.

How should you prepare your nesting box?

Owls prefer to live in logs, hollow trees, and sometimes even burrows. Often, these sites are left behind by other animals, including woodpeckers, squirrels, and prairie dogs. So because they utilize other animals’ nests, owls don’t have to build their own.

To ensure your owls are comfortable, use pine needles, old hay, shredded paper, or untreated woodchips, such as those sold at pet stores for hamsters and rabbits, to line the nesting box. This will help keep the box insulated, and a warm spot is much more appealing to an owl.

One important thing you should know before installing an owl box: owls poop where they roost, and they will roost in the same nest year after year. Occasionally, mated owls will temporarily leave their nesting boxes to venture to other parts of their territories. While you may see this as an opportunity to clean out their nesting box so they can start with newer, more sanitary materials, don’t.

Owls like their homes just the way they are. Years of build-up make the home cozier, in their minds. Cleaning out their nests can greatly reduce the chances that the owls will return. So unless the owls’ box has become infested with insects, you should leave the old nest in place — poop and all.

Which types of owls are most likely to live in nesting boxes?

Some owls, for whatever reason, are not as capable of adapting to more urban environments as other members of the species. Whiskered screech-owls, for instance, live at high altitudes in the canyons and forests of Arizona and New Mexico where they can be challenging to find. But other owls, like their close cousins the eastern and western screech-owls, are more resilient and can thrive in suburban areas — though they still prefer rural regions.

So there are some species of owls who just aren’t as willing to nest in human-made boxes as others. While technically it’s possible to see any of your region’s native owls living in your nesting box, you’re more likely to see barn owls, barred owls, eastern and western screech-owls, and saw-whet owls using them.

What else can you do to bring owls to your backyard?

Nesting boxes are the easiest, fastest way to attract owls to your backyard. In fact, other birds of prey have been known to utilize nesting boxes, too, including kestrels and hawks. But there are plenty of other measures you can take to bring more birds of prey to your property.

First, install a bird bath. Not only will owls use bird baths to stay hydrated and cool down on hot days, but they also see them as a good hunting opportunity. Owls can quickly swoop in to catch a sparrow or bluebird when it’s bathing and its defenses are down.

Second, allowing your lawn to grow up a bit makes it a perfect home for field mice, voles, and other small mammals. If you have lots of these little critters running around, then it’s only a matter of time before an owl pays you a visit.

Keeping your porch lights off at night, staying indoors during the early morning and evening hours when owls do most of their hunting, and removing starling houses so these birds won’t scare off raptors, are all excellent measures to take to gain the attention of your region’s owls.

What are the benefits of attracting owls to your property?

If you notice a lot of rodents or other varmints on your property, luring owls to your yard is an excellent way to handle the problem. Installing nesting boxes encourages nature to run its course, so you don’t have to fork over hundreds of dollars for professional pest removers.

Owls can also be used to keep caterpillars, moths, worms, beetles, and other harmful insects off your garden. And because owls are strictly carnivorous, they won’t feel compelled to peck at your plants or destroy their fruits, as other birds might. Overall, providing your local owls with a safe, cozy place to live is a cost-effective way of keeping insects, rodents, and other pests under control.

What are the disadvantages of attracting owls?

As predators, owls can be a major threat to backyard chickens, ducks, and rabbits. Owls have even been spotted carrying off housecats. So before you install an owl box, be sure to secure your animals so they won’t become an owl’s next meal.

Provided you take measures to protect your pets, attracting owls is a fantastic way to keep pest levels under control. Installing a nesting box also helps support your local ecosystem by giving these striking predators a safe place to live.