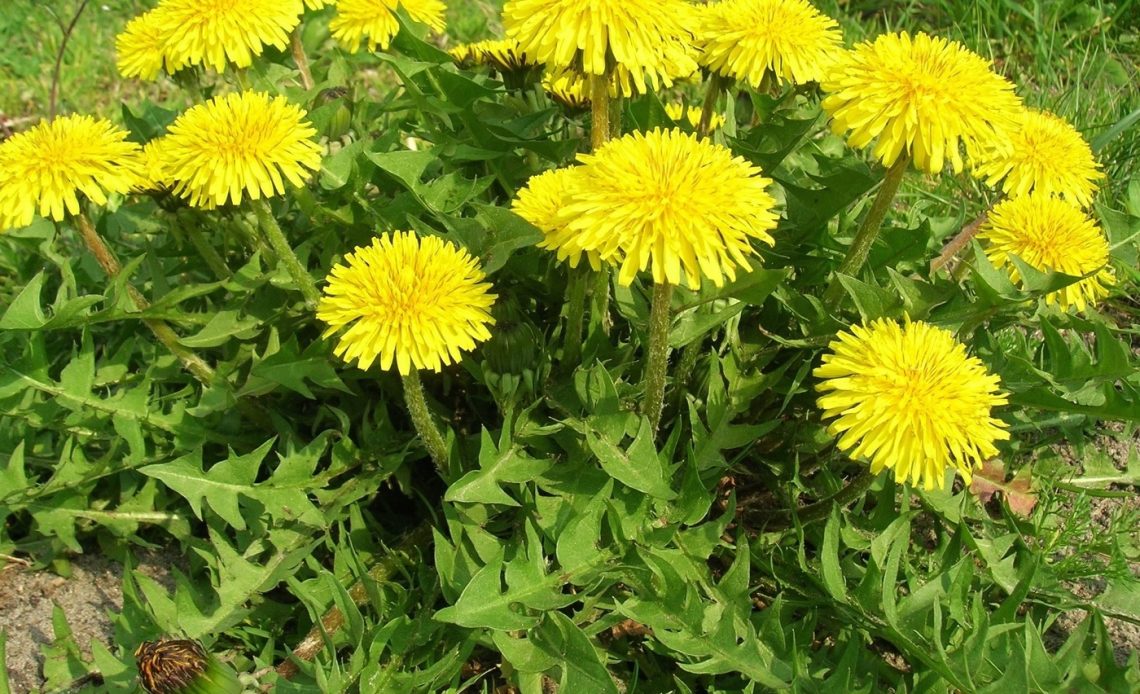 Dandelions grow all across the U.S. Their wide availability makes them a wonderful food source for backyard foragers, who use the tender leaves in salads, soups, and more. When foraging for dandelions, it’s important to make sure you know what you’re looking for. So, are there other plants that look like dandelion leaves?

Yes, there are several plants that look like dandelion leaves. These plants are called “false dandelions” and, even though none of them are poisonous, it can still be helpful to know how to differentiate between them and the real deal.

Dandelion leaves are bright yellow-green to deep green in color. The surface of the leaves is smooth with the edges being toothed and pointy, curling slightly upwards toward the center of the leaf. Dandelions have basal leaves, meaning their foliage only grows at the base of the plant. You won’t find any leaves on the stems of a real dandelion, only on plants that look like dandelion leaves.

The stems themselves have small fuzzy bristles running up and down them. This gives them a hairy feeling, but not a prickly one. They don’t hurt to touch. The stems are also hollow, and trimming them reveals a milky white sap that some false dandelions do not possess.

Where do dandelions grow?

Another thing that can help you identify dandelions is knowing where they like to grow. These weeds are incredibly hardy, growing just as well in the cracks of a sidewalk as in a big open field. Dandelions like moist soil, and even though they will still grow in shady spots, they prefer to grow in direct sunlight. So you’re more likely to see them in pastures, meadows, and lawns than in heavily wooded areas.

It’s not unusual to see lone dandelions here and there, but you’ll usually notice clusters of dandelion leaves growing together in groups. If no efforts are made to limit their growth, dandelions can overtake a grassy area in a matter of a few years, as these plants multiply each season. Leaving them undisturbed is an excellent way to re-wild your lawn.

Overall, dandelions are some of the easiest flowers for amateur foragers to identify. Every part of the plant is edible, from the roots to the blossoms. And while dandelions aren’t a great source of nutrition for pollinators, like bees, they are incredibly beneficial for us humans.

What are dandelion leaves used for?

Different parts of the dandelion are used for different things. The roots can be roasted and brewed to make a coffee substitute. The flowers can be dried and used in teas. This plant’s tender leaves and stems are perfect for eating raw in salads, but they can also be sauteed and served as a side dish or added to soups to enhance their savory flavors.

Dandelion leaves support healthy liver function by boosting the production of glutathione, a potent antioxidant. Because it increases antioxidant activity, dandelion has been used as an herbal remedy to fight inflammation for decades. Dandelion is also a natural diuretic, as is evidenced by one of its alternative names: “wet-a-bed”.

Dandelions can be harvested at any time, from the minute they sprout up right on through to fall when the leaves die for the season. But dandelions taste best in spring when their leaves are full of moisture and sugars.

As the leaves mature, they become tough and bitter. Of course, these bitter leaves are wonderful for improving digestion. So even though aged leaves are less palatable, dandelion’s medicinal qualities only improve over time.

Now that you’ve got a better idea of what dandelion leaves look like, as well as what they can be used for, let’s examine some other plants that look like dandelion leaves. Again, even though these dandelion lookalikes aren’t the real deal, they are not poisonous. So if you do pick a false dandelion instead of a real one, it may not taste as good, but it won’t be a lethal mistake.

When observed irrespective of the plants themselves, wild lettuce leaves look a lot like dandelion leaves. They’re long and prickly with toothed edges that curve inward slightly. But if you place them between your fingers, you’ll notice they feel stiff and crisp. Wild lettuce leaves truly do feel a lot like lettuce, whereas dandelion leaves are softer and more tender.

You can find wild lettuce from midsummer through October. This plant likes a bit of moisture, so you often see it growing near creeks, ditches, and rivers. It’s best to harvest this plant early in the season, but it’s just as edible later, even if the leaves are a bit tougher.

Sow thistles are plants that look like dandelion leaves, but they also look a lot like wild lettuce. These edible weeds produce serrated, crisp leaves that grow up and down its long stalks. The leaves are very prickly to the touch, and because they’re so stiff, they can scratch your skin if you brush up against them. A far cry from the dandelion’s delicate foliage.

Like wild lettuce, sow thistles produce white sap. They also grow multiple blooms at the tops of their tall stalks. If you take a closer look at the stems these flowers grow from, you’ll see that, like dandelions, they’re quite hairy.

Sow thistle likes to grow in partial to full sun. Each plant produces around 25,000 seeds, so these flowers often grow in groups. Search roadsides, pastures, and along the edges of wooded areas from early spring to midsummer to find this plant.

The biggest reason hawkweed is confused for real dandelions is because it, too, has basal leaves. The foliage of this plant stays very close to the ground. Its yellow daisy-like flowers bloom at the ends of tall, leafless stems. At first glance, hawkweed could easily be mistaken for dandelions. But a closer look reveals that they really don’t look much alike at all.

Hawkweed leaves are small and oval in shape, with smooth edges, not toothed ones. The leaves are not bright or deep green, but rather a sage-y green with white undersides. The surface of the leaves is fuzzy, much like lamb’s ear.

This weed can be found in lowland areas that stay shady and moist. Hawkweed blooms from late spring to autumn and can be harvested then. Plants produce five or more flowers at a time, so there’s plenty to forage.

One small detail that sets these two apart: flatweed’s spindly flower stalks are more flexible than dandelions. They’re more resilient. If you run your hand over them and try to rough them up, they bounce back. If you were to do the same to dandelions, the stalks would break because they’re hollow and thus more delicate.

Flatweed grows in all the same places dandelions grow — in lawns, pastures, and other wide-open spaces. These weeds can be harvested throughout the summer, and will also produce a milky sap when the stems are snapped in two.

What’s the best way to harvest dandelions and their lookalikes?

How you harvest depends on what you want to do with the plant in question. Will you use the whole plant, the roots and all? Or do you just need the leaves? If you plan on putting all parts of the plant to use, use a trowel to dig it up. Carefully remove any dirt and debris from around the roots, and be sure to fill the hole in when you’re done.

If you’re going to be using the leaves alone, take your scissors and snip them off carefully near the stem, or another point of origin. Flower heads can also be snipped this way, and it can actually promote new growth if the flowers are older, though they won’t taste as good. Taking parts of the plant instead of the whole thing allows it to keep growing, so you can continue to harvest throughout the season.

Whether you come home with dandelion leaves or plants that look like dandelion leaves, wash them gently in cold water, blot them dry with a towel, and store them in plastic bags in the fridge. Remember to avoid high-traffic areas when foraging, and be sure to use your harvest within a week while it’s still fresh.

It takes some practice to get the hang of it. But with a little time, you’ll soon be able to tell real dandelion leaves apart from plants that look like dandelion leaves.