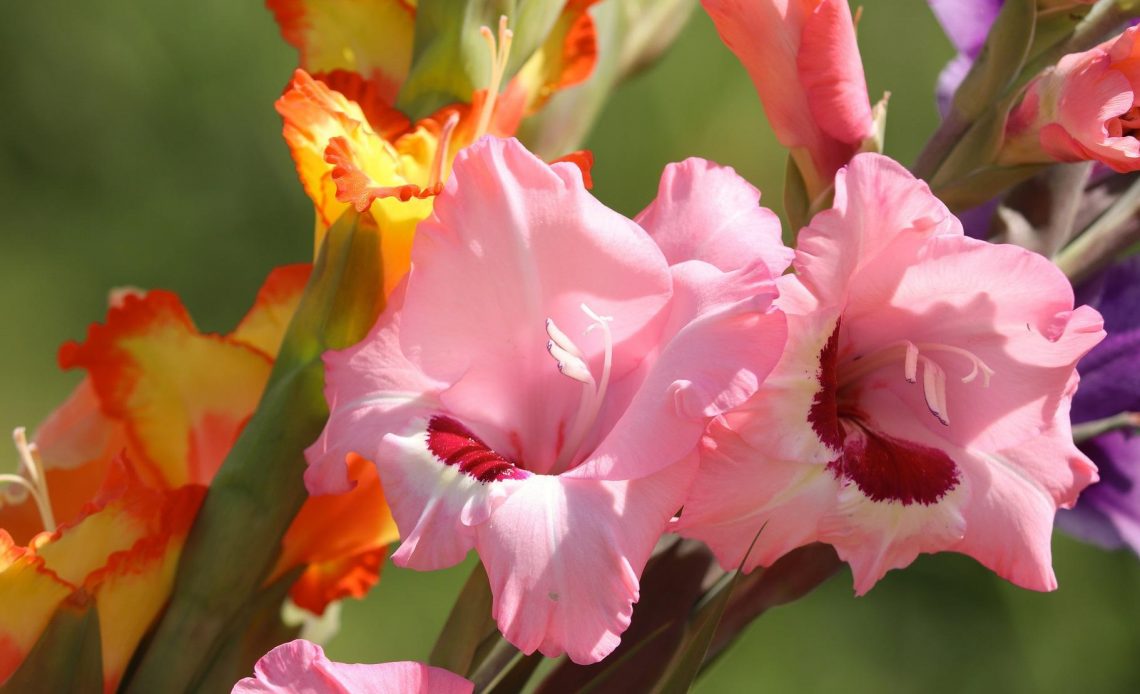 Gladioli stand out in any garden or home, thanks to their tall stems and brightly colored flowers. Although they have a very distinct shape and stature, plenty of plants and flowers look similar to gladioli. So, which plants look like gladiolus the most?

Sisyrinchium striatum, freesias, and hibiscus plants are just some specimens that could pass for gladioli to the untrained eye. Their foliages, colors, and shapes are all commonly mistaken for that of gladiolus – but there are more than a few differences to look out for.

Sisyrinchium striatum plants can often be confused for gladioli due to their long, reaching stems with flowers blooming all the way up. Their deep green foliage is equally long and thin, tapering pointy at the ends.

Like gladioli, this perennial favorite loves plenty of sunlight and well-drained soil. However, sisyrinchium plants can grow between 60 to 80 cm, whereas gladioli can often reach between 2 to 5 feet tall – this copycat only blooms bright yellow and white flowers.

Gladioli grow in a huge wave of shades and colors, such as pinks, purples, whites, reds, oranges, and more. They’re amazingly attractive to pollinators – and while sisyrinchium will still welcome some wildlife, it’s considered less appealing than its taller, bolder cousin.

Freesias may not look like gladioli in the ground, but it’s difficult to tell their flowers apart. Freesias can only grow to about 30 to 60 cm tall in the soil, and the flowers do not cover long, thin stems as they do on gladioli.

However, their foliage is quite similar in that the leaves on freesias are tall, thin, deep green, and pointy.

Just like gladioli, freesia flowers burst in all kinds of colors, from purples and reds to pinks, whites, and yellows. But, their petal shapes differ – as they have a somewhat triangular shape that leads to a hollow center, with pollen-filled stems shooting out from the middle.

Freesias tend to be slightly shorter than gladioli, too, usually growing to only 12 to 24 inches tall.

On the other hand, they are very similar to gladioli in how they grow. They, too, need well-drained soil and warm, sunny areas to thrive. Given their pollen and nectar-packed centers, they’re also a fantastic find for roving wildlife.

Like freesias, hibiscus plants do not look too much like gladioli when they’re in the ground – but it’s the style of flower that many people get confused by.

Hibiscus flowers grow on bushes, as opposed to on long stems. The foliage on these bushes is smaller, darker, and rounder than the leaves on gladioli, too.

Although the shapes of hibiscus petals are not identical to those on the gladiolus, they both have single layers and outwards folding blooms. They also both have long stems shooting out from the centers, with nectar-filled tops.

Hibiscus flowers arrive in various shades of pinks, reds, purples, oranges, and more – making them rivals to gladioli in the color palette stakes.

Similar to gladioli, these flowers also thrive in well-drained soil and plenty of sunlight, though are notorious for being very thin and easy to break. If you do plan on planting hibiscus, try to keep them near a wall or other bushes so that strong wind doesn’t send its petals spraying around.

Hibiscus will attract hummingbirds, and it’s also a favorite of butterflies. You likely won’t see many bees fluttering around hibiscus, mainly because they aren’t attracted to its colors.

Of all of the plants on this list, it’s probably hollyhock plants that resemble gladioli the most. Although their foliage may not bear much resemblance, the flowers and their positions on the stems are easy to confuse.

Hollyhock flowers grow on long, thin stems that can extend to around the same height as gladioli plants. Conversely, hollyhocks can grow up to eight feet tall, potentially towering over your gladiolus patch. They both grow similarly, in that lots of sunlight and drainage are a must.

Hollyhock plants are similar to hibiscus as their petals are relatively thin, although some varieties are double-flowered and are therefore less fragile.

Hollyhock flower colors, meanwhile, burst into vibrant shades of pink, red, yellow, purple, orange, and white. Their bold, bright petals form around a brilliant center with stalks of pollen sticking out. They’re very obvious to pollinators flying around your garden and are rich in nectar.

The tallest hollyhock on record grew to be 24 feet, two inches – while your specimens may not scale these heights, they’ll still make impressive garden decorations.

Commonly confused with the similar larkspur plant, the delphinium is just as ‘necky’ as the gladiolus, boasting flowers scaling an upright stem that can reach heights of about six feet at the tallest. One of the key differences between delphiniums and gladioli in your garden is that these plants will likely overshadow them – as with hollyhocks.

While their leaves are large and edged (unlike those of gladioli), their flowers boast equally bright, beautiful petals with easy-to-see pollen-filled centers. They typically grow in dark shades of purple and blue and can also be found in light blues and whites. Either way, these shades are likely to appeal to various species of bees.

True to the list, these flowers also grow best in full sunlight and well-drained soil!

Why should I grow plants that look like gladiolus?

To attract pollinators regularly to your garden, it’s a good idea to grow a varied crop of flowers – and you can create a colorful array of blooms that match and complement each other alongside gladioli.

The gladiolus is a fantastic plant that appeals to butterflies, hummingbirds, and even bees occasionally. A handful of other plants and flowers that look like gladiolus will help to keep your wild visitors well-fed and will often demand similar light and water.