What To Plant After Potatoes – The Best Plants for Crop Rotation 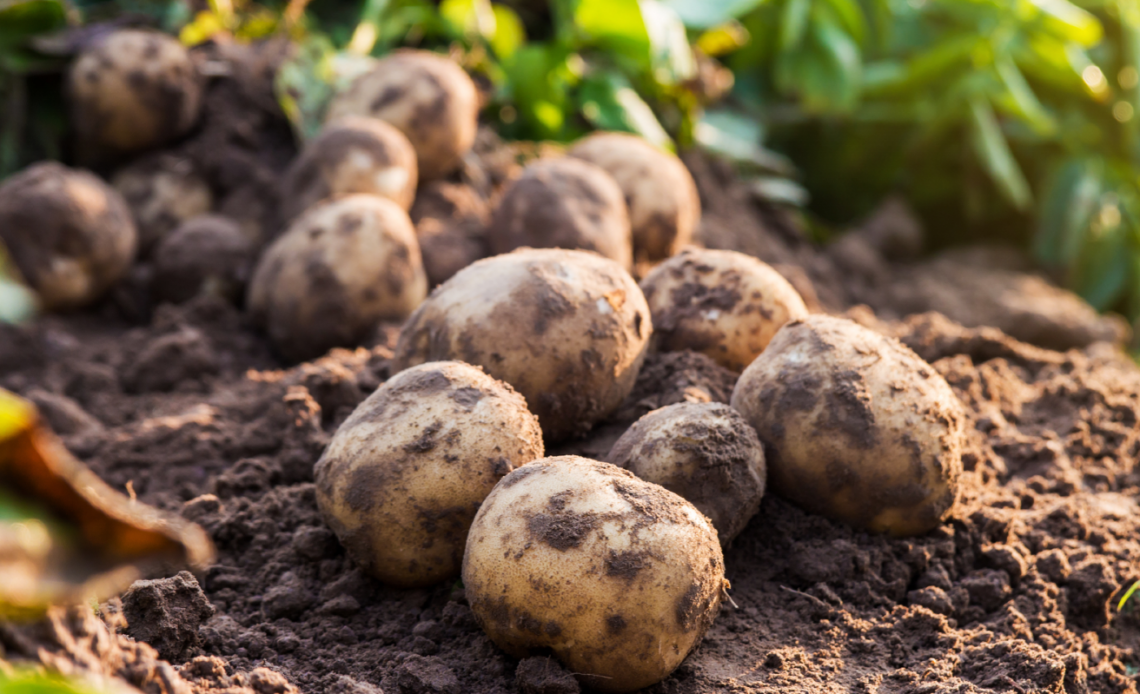 Crop rotation adds beneficial minerals back into the soil. This agricultural strategy is particularly helpful after growing vegetables that are heavy nutrient-users, like potatoes. If you grow potatoes in your garden, you may be wondering what to plant after potatoes to replenish the soil once you’ve harvested them. There are several plants that you can add to your crop rotation to improve soil conditions and make the most of your garden space.

Beans and other legumes improve soil quality by restoring nitrogen levels. Plants that have low nutrient requirements, like parsnips, dill, and sage, can be sown in spaces where potatoes were previously grown. And lettuce, cauliflower, melons, and cucumbers give you more veggies to harvest after your potatoes are finished growing for the season.

What to plant after potatoes to improve soil quality

Plants use nutrients to bloom and produce fruit. So all of the fruits and vegetables in your garden will take minerals away from the soil once harvested. But some plants require more nutrients than others. Potatoes are some of the heaviest feeders in a garden, so taking measures to improve soil quality after the harvest is necessary to ensure your crops stay healthy during the next growing season.

Leeks are a popular choice for replacing old potato crops. We recommend starting your leek seeds indoors in March or April, repotting them as necessary over the next few weeks before transplanting them to your empty potato beds after the harvest in June or July.

Leeks benefit from being planted in the loose soil that potatoes leave behind. But consider applying a layer of sawdust, straw, or old lawn clippings as mulch to help your leeks retain moisture.

Leeks are slow growers, but they’re light to moderate nutrient users, so they’re an excellent choice for replacing potatoes. Your leeks will be ready to harvest in fall, and frost-resistant varieties can continue to be harvested throughout the winter.

If you’re not interested in growing beans, other legumes can produce the same effects. Lupines make excellent companion plants in general because they don’t just enhance the soil, they also attract birds and insects that help support pollination in surrounding plants.

Once your potatoes have been harvested, preserving the nutrients that remain in the soil should be your top priority. You might think it would be best to leave the soil completely alone. But actually, leaving the soil uncovered exposes it to sunlight, which can actually result in nutrient loss.

Dill is an easy-growing herb that uses very few nutrients. Replacing your potato crop with dill helps prevent soil erosion and protects the good bacteria in the soil from baking in the sun. You can even use dill as a companion plant to grow as a living mulch between potato plants.

Parsnips are among only a small handful of root vegetables that don’t require a ton of nutrients. The one thing that parsnips do need is loose soil. Parsnips need plenty of space for their roots to reach their full size. Since potatoes also thrive in loose soil, you can plant your parsnips in old potato patches without any extra work.

Parsnips are another veggie that can help lock nutrients in the soil. Because they require little nutrition, you can plant parsnips along with beans in your old potato rows to restore lost minerals and prevent nutrient loss.

Once you’ve plowed your old potato plants under or tossed them onto the compost heap, you can use the space for herbs. Sage is beyond easy to grow and it protects the soil from erosion and nutrient loss. Growing dill and sage together makes good use of space.

Sage doesn’t just help the soil recover from your potato crops. Its pungent essential oils work day and night to keep garden pests like armyworms, leafcutters, and grasshoppers off your plants. And, when sage blooms in late spring and early summer, it attracts bees, wasps, and other pollinators to your garden.

Potatoes are ready to be harvested 90 to 120 days after germination. If you planted your potatoes in early spring, this means they’ll be ready in May or June. It’s important to grow other plants after you’ve harvested your potato crop in order to make the most of your garden space.

Cucumbers are fast growers so they can quickly fill the void your potatoes leave behind. These are vining plants with broad leaves that sprawl all over the ground. They need plenty of room to spread out. But you can train cucumbers to climb up a trellis to save space.

Burpless cucumbers are a popular choice among gardeners. These cucumbers contain less cucurbitacin, the compound thought to be responsible for cucumber-related burping. Cucumbers take 50 to 70 days to mature, and each plant averages 10 cucumbers in a season.

Once your potatoes plants have died back, sow lettuce seeds in the empty rows. Lettuce takes 6 to 8 weeks to mature after seeds have sprouted. These are fast-growing vegetables with a good germination rate. Plus, lettuce’s shallow root systems will help the soil retain nutrients.

If you’re not a fan of lettuce, you can grow other leafy green vegetables in old potato rows. Cabbage, kale, and endive can also be grown after potatoes so you can utilize the space in your garden efficiently.

Watermelons love the loose soil that potato crops leave behind. These plants are low to moderate nutrient-users, so they can help your garden soil recover in between potato crops. What watermelons really need is water — no surprise there.

Potatoes grow best in soil that drains well but can stay moist, and that’s just what watermelons need to thrive. Growing watermelons after your potato crops saves you from having to amend the soil in other parts of your garden. Watermelons are ready to pick 70 to 100 days after germination, with each plant producing 4 to 5 melons.

Because they take so long to mature, potatoes are often harvested later in the growing season, usually in midsummer. Cauliflower can be started in pots indoors in July, right as your potato crop is being harvested. Once they’ve grown big enough, they can be transplanted to your empty potato rows to grow in your fall garden.

Cauliflower is one of the best fall vegetables to grow because it matures quickly. You can harvest cauliflower from your transplants in 50 to 80 days. Plus, cauliflower has shallow root systems that won’t steal nutrients from deep in the soil. They’re an excellent choice for a recovering potato garden.

What to plant after potatoes if you fertilize your garden regularly

If you regularly fertilize your garden beds to restore lost nutrients, you don’t have to grow plants that will conserve or replenish minerals. Instead, you can focus on staggering growth rates to get the most out of your garden. Use the following guide to determine which plants to grow based on when you harvest your potato crop.

What to plant after potatoes that are harvested in May

What to plant after potatoes that are harvested in June

What to plant after potatoes that are harvested in July

Which plants should you avoid growing after potatoes?

Potatoes are a member of the Solanaceae family, which also includes eggplants, tomatoes, and peppers. Because these plants share diseases and can become infected with similar pests, many gardeners avoid planting them in empty potato rows.

If you don’t fertilize your garden regularly, then heavy feeders like asparagus, broccoli, onions, and turnips, should not be planted in your old potato patches. Not only will these plants steal even more minerals from the soil, but they also won’t perform well due to low nutrient concentrations.

It’s also worth mentioning that if your potatoes suffered from blight or any other disease, you should avoid reusing the soil at all. The soil should be removed and replaced in order to avoid transmitting infections to the other plants in your garden. If you can’t discard the soil, refrain from planting anything in the beds for 4 years to kill off any bacteria or fungi that remain behind.

How else can you support your garden?

Crop rotation gives the soil a rest between plantings. As a gardener, it’s an important tool in your arsenal. But there are other things you can do to improve soil quality. Start a compost bucket today so you can give your garden a healthy dose of homemade fertilizer. And try mixing some locally-sourced manure into your garden soil to improve nutrient availability.

Growing the right plants after your potatoes have finished for the season will give your garden a break to recover. By staggering seed germination, you can replace your potatoes with other crops quickly and make the most of your garden space all season long.