Why Do Birds Chirp At Night? 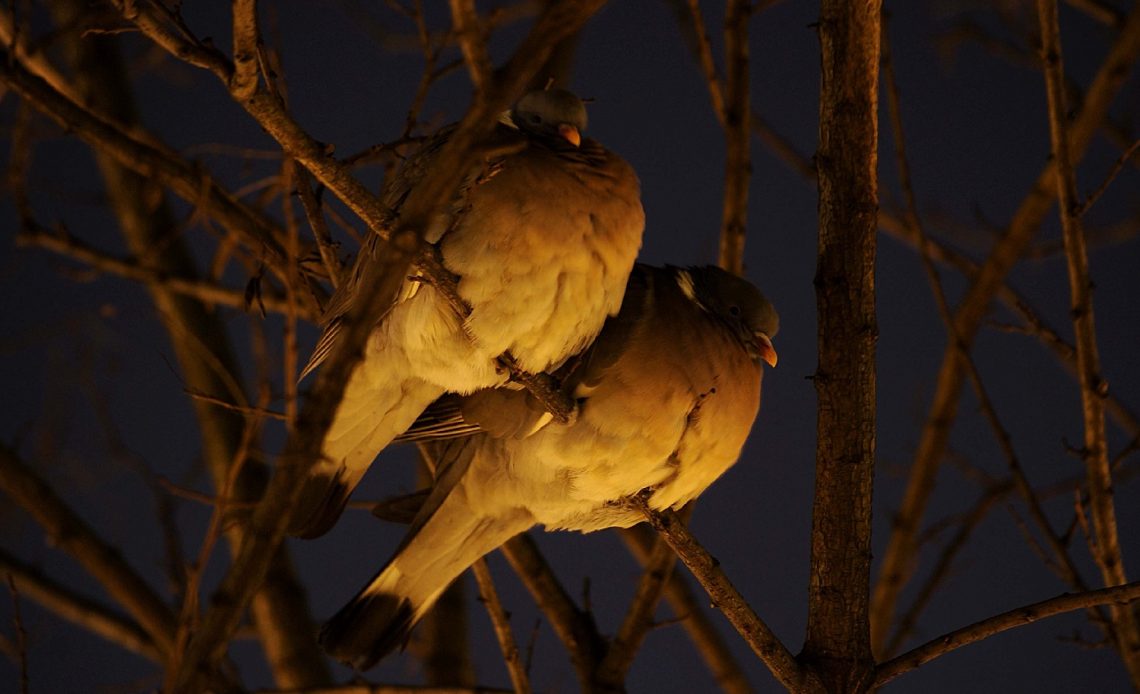 We’ve all heard birds chirping and cheeping away in daylight hours – but when night falls, it’s not uncommon to hear birdsong continue. Even those birds considered diurnal – who wake during the day – are known to make noise at night! But why do birds chirp at night – and should you worry?

Many birds chirp at night to communicate, alert one another, attract mates, and even practice their daytime singing. Some birds chirp more at night than others – such as owls and robins – but a nighttime chorus is never something to worry about.

So – why do birds chirp at night?

While reasons for chirping and singing at night may vary depending on the species, there are a few common causes for vocal practice after dark. Here are eight reasons why your local wildlife may be noisier than usual after bedtime.

1. It’s part of their nocturnal routine

Unlike diurnal birds, nocturnal species have internal ‘clocks’ that encourage them to sleep during the day and hunt at night. Some of the most common nighttime vocalists are nocturnal birds, though this trait isn’t exclusive to day-sleepers.

For example, barred owls, mockingbirds, whip-poor-wills, and common nighthawks are nocturnal birds that are easy to hear across North America.

These birds have evolved to hunt and feed at a time when there’s likely to be a varied choice of prey and potentially less competition. If you live close to their habitats, it’s likely you’ll hear them hunting, appealing for mates, and feeding after sundown.

Mating season – typically the spring for most birds native to North America – is always likely to be noisy! This means you won’t just expect a blast of birdsong early in the morning to start your day, but overnight, too. As you may expect, this trait is most common among nocturnal birds.

While many nocturnal birds use mating dances and feather displays to attract mates, under cover of darkness, it’s perhaps easier to appeal to other birds with song. Common mockingbird and cardinal species, for example, tend to prefer a little night music.

Day or night, birds that feel threatened or distressed will call out for help. This is a built-in alarm system, both to help ward off predators and to raise an alert to other birds in their flock. One bird likely to chirp out of distress usually triggers a chain reaction among others in their group, causing louder or more widespread chirping.

Birds will cry out if they feel their lives are in danger. This threat may be innocuous – but many species feel threatened by loud, sudden noises and unexpected movements around their nests. Given that many birds have little protection against predators, they chirp loudly to ‘rally the troops’ – as there is safety in numbers.

Unfortunately for people trying to sleep close by, if a nocturnal predator takes a shine to an unsuspecting nest, it may result in some loud panic after dark.

4. They’re looking for each other

Many songbirds chirp and sing to each other to keep track of the flock. Studies show that many songbird species create an audible ‘radar’ in similar ways – through the use of flight calls.

Flight calls tend to be quieter than chirps of distress or those used to attract mates. Birds calling to each other in this way will often chirp more when migrating to scout out a new location to nest in. Given that many birds migrate thousands of miles from season to season, it’s expected that some flight calls can be heard at night.

It’s also thought that birds will call and chirp to account for group numbers. This call-and-response technique is another vocal practice that ensures safety in numbers and is particularly useful post-migration, or if under threat from predators.

Just as human babies ‘babble’ to learn speech, infant birds ‘practice’ their vocal skills to learn how to communicate with others. This applies to diurnal and nocturnal birds – which means you may hear a little song practice after dark if baby mockingbirds or robins are seeking to fly the nest.

Infant birds learn how to sing and call through mimicry. This means nocturnal babies will continue chirping for long periods until it becomes an innate activity. This can make for a noisy night or two for people trying to sleep close by until said birds are a little more confident!

In addition to learning how to call, baby birds cry out for their parents if they are hungry, in distress, or need protection – just as human babies do. Parent birds will often have to disappear from their nests occasionally to find food – and nocturnal babies will chirp and cry loudly until they return. Ultimately, loud bird noises at night could indicate that nocturnal eggs have recently hatched in your area.

Just as dogs and cats mark ownership and territory through urination, many songbirds mark their nests through song. Birds are highly protective over their nests, shelter, food, and their young – and will sing loudly to ward-off would-be intruders. A nocturnal bird loudly singing at night may simply be warning ‘this is mine’!

Some birds will accompany these vocal warnings with physical aggression – they may chase off would-be food thieves, for example!

Sadly, light pollution is a major cause of confusion among songbirds that otherwise wake during the day. Artificial lighting, such as that created from buildings and streetlights, may be so strong that some birds believe it’s daytime – in which case, they start singing and calling as usual, despite it being late at night.

Various studies confirm that artificial light can have a detrimental effect on birds’ internal rhythms or biological clocks. Species such as common sparrows, typically diurnal birds, rely on the sun’s light to know when to sleep.

Bright lights and loud noises (such as local machinery or activity from towns and cities) will also confuse birds used to relying on nature’s alarm clocks. Birds migrating from rural areas towards urban zones such as cities may exhibit this disorientation more than most.

Just as many birds will call out to inform others of danger or to account for location, a new food source is a likely cause for chirping amongst nocturnal birds.

This chirping behavior also occurs, it’s assumed, through sheer excitement – finding a new source of food means that a bird can provide more for its family. For a male bird, this event may even give it a slight edge over the mating competition for local females.

Just as birds won’t hold back on chirping loudly if they are in distress, many won’t hide their excitement if they find something tasty. It’s highly beneficial to their wider flock to know where new sources of nutrition may be coming from, day or night. This behavior is similar to that exhibited by honey bees, which alert their fellow hive members to new sources of nectar.

Which types of birds chirp at night?

Whether for mating, feeding, or to locate each other, there are scores of species across North America that you’re likely to hear at night. Here’s a handful of the most common suspects.

The northern cardinal is a roving propagator, and while not strictly nocturnal, may choose to hunt for mates at night. Typically bright-red, yellow or pale brown, these birds are rife across the southeast and southwest of the US, though you may hear them as far north as Canada!

The American robin is a curious critter in that it’s largely adapted to sing at night thanks to human behavior. This species is a highly common sight across North America, and you’ll even hear it out towards cities, choosing to sing when it can get a chirp in amongst the noise of traffic!

It’s perhaps safe to place most owls in a list of nighttime vocalists, though the barred owl is particularly keen to chirp and call under cover of darkness. As you may already know, owls don’t tend to chirp at all – they hoot and screech.

You’ll normally hear the hoot of a barred owl towards the east of the US and up towards the Pacific Northwest. The call of the Strix varia tends to arise through nighttime courtship rituals. Depending on your beliefs, an owl call may be considered good or bad luck!

The northern mockingbird is famously vocal – to the extent it calls and chirps at all hours of the day, not just at night. These intelligent birds can learn hundreds of unique songs, making them some of the most accomplished singers in the avian kingdom.

These birds aren’t simply show-offs – they are highly defensive, meaning you may hear them calling at night as they defend their nests. They’re commonly found in southern states heading down into Central America.

This coastal caller makes common sounds across Florida and California, with a territorial call that rattles through the night. Despite its notorious noise, this is a sparrow-sized bird that’s sadly endangered. Interestingly, despite residing mainly around the south coast, the black rail has been spotted breeding across eastern states.

The yellow-breasted chat is more often seen than heard, particularly at night – during which it conducts mating surveys. It’s one of the most diverse callers with a series of interesting clucks and warbles – and you’ll find it breeding east to west. This nighttime singer will usually migrate towards the south of Texas and beyond.

The whip-poor-will is a bird that’s named after its distinctive call. This curious-looking bird will commonly chirp for hours at a time, night and day, to find mates. It’s a master of disguise that sleeps on the ground – and it’s almost exclusively found breeding and thriving to the east, with almost no record in western states.

The common nighthawk, belonging to the nightjar family, is a fervent nighttime hunter, making deep, resonating calls as it dives to seize prey. It’s a bird of many displays – though you’re more likely to hear them than see them. Its breeding patterns take this bird all over the US.

Should I worry about birds chirping at night?

There’s no need for concern if you hear birds chirping at night – more often than not, they will be hunting, attracting mates, or keeping track of each other. Be warned, your garden may get noisier heading into the spring – but remember, a noisy yard indicates a healthy ecosystem! Why not start encouraging nocturnal birds to your garden by attracting owls?