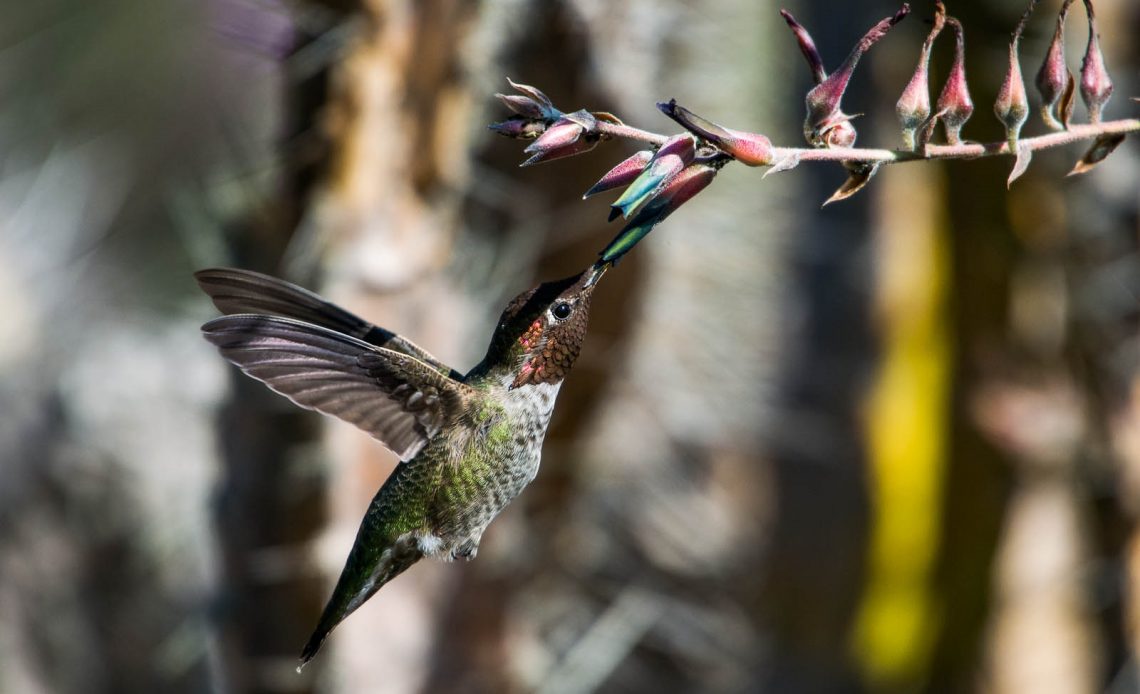 Hummingbirds not only have a reputation for feasting on colorful flowers, but on a host of insects and minibeasts, too. Some refer to these pollinators as ‘natural pest controllers’ for the garden – though they can have exacting tastes. For example, do hummingbirds eat ants?

Hummingbirds will eat ants, but not out of choice. Thanks to their shared love of sugar, they will usually only eat them if they are present in a feeding spot. Hummingbirds don’t depend on ants as part of their regular diet, instead preferring to focus on plant nectar and, occasionally, winged insects that come their way.

Hummingbirds and ants have a strained relationship as they compete for natural sugar in the garden. The ant is an omnivorous scavenger, meaning it will hunt down and eat almost anything in its path. When in the same garden as hummingbirds, this can result in winged pollinators missing out on food left in bird feeders or even traces of nectar and sucrose elsewhere.

While ants and hummingbirds will compete for the same food sources, this doesn’t mean the latter will actively hunt the former down. Hummingbirds require an incredible amount of calories per day to survive – research shows this equates to around 50% of their given bodyweight per day! Insects such as ants don’t make up much of these calories – and hummingbirds tend to only snack on them to get them out of the way of their favorite food.

It’s important to remember that hummingbirds will need some protein in their diets – and that’s where insects come in. Ants can provide much of this need, whether they choose to hunt them down or not.

Hummingbirds will also eat some winged insects if they come their way. Hummingbirds will happily eat aphids, for example, though this is mainly due to the hummer’s opportunistic nature. They share some foraging and feeding habits with ants in this regard.

Unfortunately for hummingbirds, ants are rife. They propagate wildly, with an estimated population of around 10,000,000,000,000,000,000 worldwide (that’s ten billion billion)! If you leave any sugary foodstuffs or bird feed outside, you can be sure ants will find their way to it.

Many gardeners and wild yard owners try to help hummingbirds fight back against ants. While the birds can and will remove the pests as and when necessary on their own, ants act in large numbers and are remarkably efficient! If you are worried about ants stealing all of your hummingbirds’ food, it’s good to try and insect-proof their feeder(s).

How do I keep ants off my hummingbird feeder?

The easiest way to keep ants away from hummingbird feeders is to install a small ant moat. This tiny trap-like device hooks onto a standard bird feeder, effectively preventing insects from wandering into nectar holes without deterring hummingbirds. Ant moats are widely available to buy from stores and online.

Ants are intelligent enough to avoid trying to cross water – simply because they probably won’t make it across alive. Despite the risk of ants drowning, this is considered the most humane way to prevent ants from accessing hummingbird food. There’s no need to use harmful ant-killing chemicals, and you’re not disrupting the wild balance in your garden.

Believe it or not, ants are pollinators, just like hummingbirds. While they won’t frequently visit wildflowers for nectar and spread pollen, they still play an essential part in helping greenery grow. With this in mind, for the wildest garden possible, you will need to go easy on your local ants!

Unfortunately, there are no other proven ways to prevent ants from accessing bird feeders outside of chemical repellents and traps. You also can’t rely on hummingbirds to keep ants out of your garden, either! Ants are inevitable – meaning we need to think creatively about how to prevent them from stealing from hummingbirds’ food supplies.

What is a hummingbird’s favorite food?

Hummingbirds prefer eating pure nectar over any kind of bug or insect, such as the common garden ant. You’ll typically find them feasting on brightly-colored flowers, preferably shaped in trumpet-like blooms so they can easily pop their beaks in and feed with their famously long tongues.

For example, hummingbirds love eating nectar from flowers such as lantanas, morning glories, snapdragons, sunflowers, azaleas, and calibrachoa. These blooms are full of nectar, particularly sunflowers – which are composed of multiple tiny flowers, always likely to give off a quick hit of natural sugar.

Ants may visit flowers occasionally for sugar, but like hummingbirds, they are opportunistic. They’re omnivorous and won’t rely on flowers for food, either. Hummingbirds may have pollinator competition with some colorful flowers – bees and wasps, for example, love bright colors and strong fragrances – but trumpet-shaped flowers, while easy for hummingbirds to get into, will deter butterfly competition.

Should I feed ants to hummingbirds?

It’s not a good idea to focus on feeding hummingbirds with insects – instead, grow a wide variety of hummingbird-friendly flowers they can rely on for regular nectar.
Ants have no real place in the sugar-based diets of hummingbirds, though that doesn’t mean they won’t pick them off if they get in the way! If you’re keen to attract hummingbirds and keep them well-fed, be sure to give them a helping hand – protect feeders with a moat or two and deter ants on sight.