Do Hummingbirds Open Their Beaks? 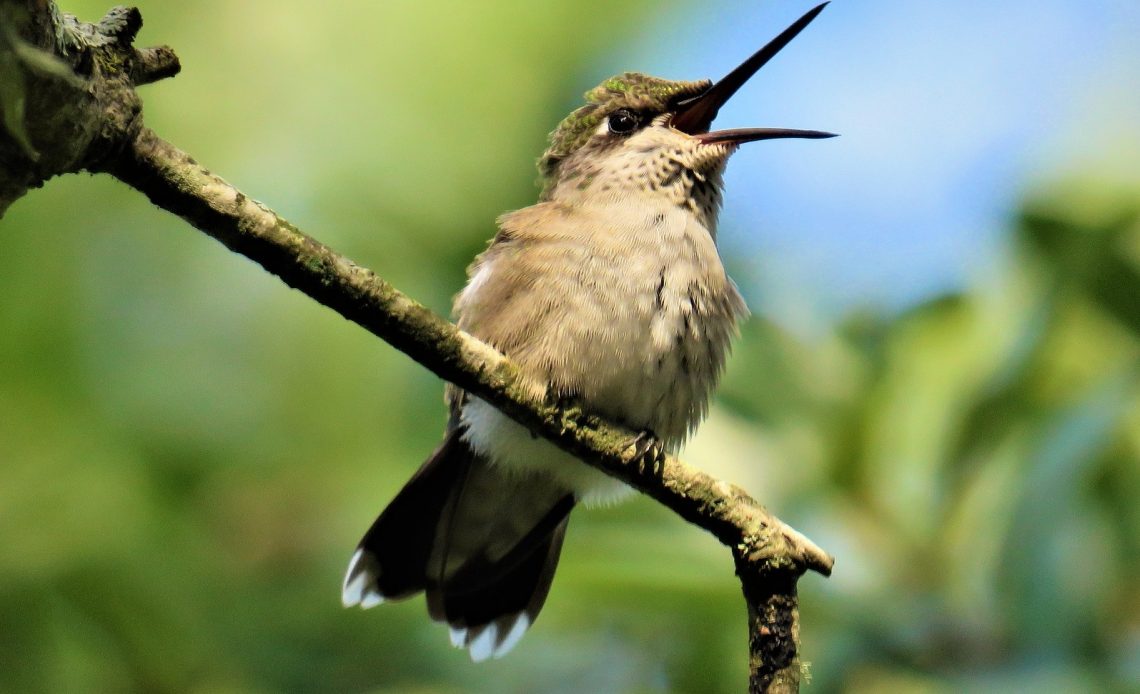 If you have ever been lucky enough to spot a hummingbird feeding from one of your flowers or your homemade nectar feeder, then you might have been a little confused as to how it was able to eat! We rarely see hummingbirds opening their mouths. Most of the time, they appear shut when flying or simply resting. Naturally, this leads many of us to wonder – can hummingbirds open their beaks at all?

Hummingbirds can open their beaks freely, but only when necessary. They often use their long tongues, which they shoot through the ends of the beaks, to retrieve the nectar and water. There’s often little need for a hummingbird to ‘open wide’.

The hummingbird has no need to open its mouth to eat food or to breathe simply because this is how it has evolved. What is more, the hummingbird’s tongue is an amazing feat of natural engineering!

Various studies of the hummingbird tongue over the years have compared it to micropumps and even fluid traps. The fact is, this little bird’s mighty tongue can flick out and capture a host of nectar in the blink of an eye – with there being only a slight gap for it to emerge.

It’s suggested that hummingbirds’ never-ending need for nectar and calories to burn means that the species has had to evolve a super-fast way to feed and breathe on the go. Over thousands of years of evolution, it could well be that the hummingbird has fine-tuned its eating behavior so that it barely has to spend a second or two getting the sustenance that it needs!

If you regularly welcome hummingbirds to your garden, you may have already noticed that they barely spend a moment or two stopping and flying off again – they are remarkably efficient.

How do hummingbirds eat?

Beyond using their tongues to get to nectar and water, hummingbirds do also open their beaks when they eat other food. As you may know, hummingbirds also often feed on small insects, usually ones in flight. Therefore, to catch these insects, it’s necessary to open-beak!

In fact, hummingbirds are particularly good at catching mosquitos – a bonus for you if you want to attract hummingbirds.

They also open their beaks to catch things in their mouths, notably material that they can use to build their nests.

How do hummingbirds breathe?

Unlike us, hummingbirds do not breathe through their mouths. Instead, they breathe exclusively through their nostrils – of which they have two at the bases of their beaks. Once the air has passed through the nostrils, it reaches their lungs, which are connected to air sacs.

How do hummingbirds feed their young?

Even though hummingbirds barely open their mouths unless they need to, they still regurgitate into their babies’ mouths, at least for the first 45 to 60 days of rearing.

Baby hummingbirds need feeding multiple times a day and need good sources of protein and nectar, which they get from flowers and insects that their mothers feed to them.

However, hummingbird mothers keep their beaks relatively closed as they feed them, opening them just enough for the food to come back. On the other hand, their young open their mouths wide, ready for the feast to come!

Is a hummingbird’s beak fragile?

Sadly, hummingbird beaks are relatively fragile. These birds are small and relatively weak creatures, and their beaks are no exception. They are also prone to breaking, as adept as they are at getting the nectar out of flowers and hummingbird feeders.

It’s suggested that this is perhaps why hummingbirds keep their beaks so tightly closed. There is no inherent need for the animals to open their mouths wide, even when feeding – and given that they are prone to the occasional accident, it stands to reason they will want to stay well-protected.

If you see a hummingbird with a damaged beak and are concerned, it is wise to consult a wildlife rehabilitation center or representative as soon as possible.

Is it common to see a hummingbird opening its beak?

No – not at all. However, there’s no need for concern if you do see a hummingbird opening its mouth even slightly. It just so happens that this is behavior it’s not dependent on.

Therefore, providing you keep ensuring you grow flowers hummingbirds love to feed on, and keep an eye on your hummingbird feeder from time to time, these plucky pollinators can and will look after themselves perfectly fine.