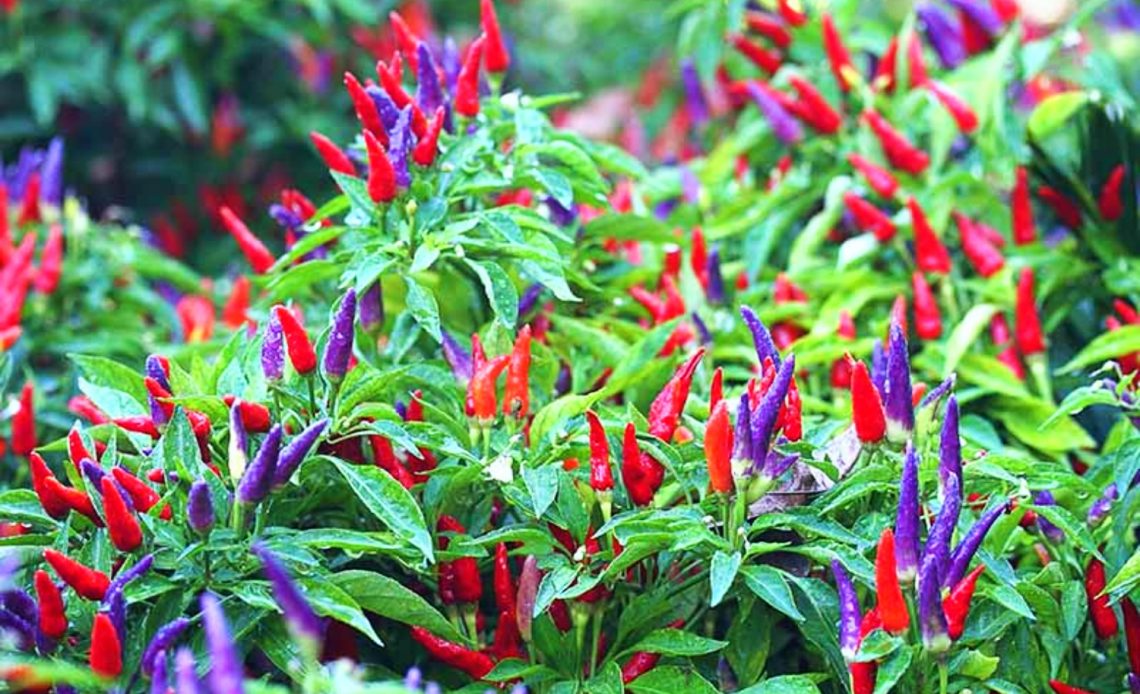 If you want your vegetable garden to be beautiful as well as fruitful, planting peppers that grow upwards will help you dress things up. While most garden peppers grow down so that the peppers dangle from the plant, other peppers grow up and out, adding eye-catching contrast between the peppers and the foliage. If you’re looking to add ornamental peppers to your garden, you may be wondering which peppers grow upwards.

Tabasco peppers, Fresno peppers, and Calico peppers are among the most popular peppers that grow straight up from the plant. Other upward-growing peppers include Purple Tiger peppers, Prairie Fire peppers, and Thai Hot Ornamental Peppers.

Why do some varieties of peppers grow upwards?

Some pepper cultivars naturally produce peppers that project upward and outward, seemingly defying gravity. This is a natural adaptation that helps the plants disperse their seeds when the fruits break down. The peppers’ bright, flashy colors also help attract birds and other foragers, who will help spread the plant’s seeds as well.

Some peppers that grow upwards are considered ornamentals, but others aren’t. In spite of the fact that certain pepper cultivars are grown simply for their looks, they’re still safe to consume. It’s worth noting, however, that ornamental peppers may not taste as good when eaten raw, unlike other varieties, such as banana peppers.

Ornamental peppers are prolific producers. So if you use a lot of peppers in your cooking, they may be the best option for your garden. If you prefer to eat peppers raw, or can or pickle them, downward-growing peppers are probably the better choice for your needs. However, this isn’t a hard and fast rule. Ultimately, it comes down to your own personal tastes.

Which types of peppers grow upwards?

Before we take a look at some upward-growing peppers, first, consider your garden’s needs. If you’re growing upright peppers purely for aesthetic purposes, then choose whichever peppers you like best. But if you’re planning on eating the peppers, you should instead consider your heat tolerance.

A pepper’s heat is measured using Scoville heat units (SHU). On this scale, bell peppers are considered a 0, being sweet with no heat, while ghost peppers have a rating of 855,000 to 1,463,000, which is considered extremely hot. To give you a reference point, jalapenos are somewhere in the middle of these two ratings, at 2,500 to 8,000 on the index. Bear this in mind when choosing from the following peppers.

A variety of chili peppers famous for their use in the hot sauce of the same name, tabasco peppers are roughly 2 inches long and take on a bright red color at maturity. Plants have a bushy yet tapered growth pattern that makes them easy to maintain and well-suited to growing in pots. These peppers start out a gorgeous green, turning orange and finally red as they ripen. The peppers are around 8 times stronger than a jalapeno pepper, and their potency makes them perfect for cooking, rather than eating raw. Tabasco pepper plants typically produce 30 peppers per plant, with peppers being ready for harvest around 80 days after germination.

At just 1-inch in length, Purple Tiger peppers are small, but their vibrant purple coloring makes them hard to resist. These ornamental peppers can be grown purely for their showstopping looks, but they also provide a burst of mild heat to home-cooked meals. If you’re looking for a pepper that has around the same heat level as a jalapeno, the Purple Tiger is right for you. The plant features stunning tri-color foliage, in shades of creamy yellow, deep green, and midnight purple. Like tabasco peppers, Purple Tiger peppers grow well in pots, as these plants need good drainage to prevent root rot.

This ornamental pepper sees a dramatic change in color as it matures. Young peppers start out a deep purple, so dark they can sometimes appear black, turning bright orange to blood red as they ripen. The peppers measure only about an inch in length, and the plants are on the small side, too, with a thin, conical growth pattern. Explosive Ember peppers grow well in small pots on patios, but make an attractive border for a flower bed as well. The plant’s purple flowers are popular with pollinators, meaning you can use Explosive Ember peppers to encourage insects to visit your garden to maximize crop yield during the harvest.

Fresno peppers are just as hot as jalapeno peppers, if not more so. These peppers offer more depth than jalapenos, possessing smoky, fruity undertones. Fresno peppers start life growing upright, and as the peppers mature and get heavier, they begin growing downward. Their ever-changing appearance makes them a perfect choice for the backyard gardener who wants their vegetable patch to be functional and aesthetically pleasing. Fresno peppers start out green, turning orange and red as they ripen. Green peppers tend to be mild, with peppers becoming hotter as they mature.

In shades of white, purple, yellow, orange, and red, Prairie Fire peppers look like Christmas lights strung out over the plant’s bright green foliage. These peppers are considered to be very hot, but with sweet undertones that make them quite palatable. Whether you decide to grow Prairie Fire just for their looks or to spice up your cuisine, these 1-inch peppers are up to the task. This ornamental pepper is perfect for growing in decorative planters but works well as a border for flower beds, too.

These 3-inch long peppers are primarily grown as ornamentals, but don’t let that fool you. Masquerade peppers taste just as good as they look, although they are very hot — roughly 8 times hotter than a jalapeno. Peppers start out a healthy green color, turning orange, then red, then purple as they ripen. Peppers can be picked at any time, and are ready to be harvested anywhere from 70 to 100 days after germination. These small shrubs feature the deep green foliage characteristic of most pepper plants and thrive in full sun.

With a similar heat profile as cayenne peppers, Chinese 5-color peppers can be used in much the same way. Their depth of flavor makes them an excellent replacement for the one-note cayenne pepper, adding a touch of sweetness to the spice. The peppers measure around 1-inch in length and come in (surprise, surprise) 5 colors: green, yellow, orange, red, and purple. This stunning array of colors makes the Chinese 5-color pepper plant a fantastic ornamental, but the pepper’s irresistible sweet heat means the plant can be a functional member of your vegetable patch.

Featuring flashy red peppers against a backdrop of green foliage, Thai Hot ornamental peppers can be anywhere from 6 to 40 times as hot as a jalapeno pepper. These peppers turn from green to yellow to red as they ripen, getting hotter as they grow. This variety grows especially well in hot, humid climates, where finding ornamental plants can be challenging. Thai Hot ornamental peppers measure 1 to 2 inches in length and have rich, earthy undertones that make them ideal for use in salsas and hot sauces.

If you have sensitive taste buds, steer clear of the calico pepper — or, at least, stick to growing them as ornamentals. Calico pepper plants are prized for their beautiful deep green foliage, speckled with purple and cream patches throughout. The peppers themselves measure 2 inches in length at the most, and start out a deep purple color, changing to bright red as they ripen. The calico pepper plant’s vivid red peppers stand in stark contrast to its dark purple foliage, creating a fantastic display of color that’s impossible to ignore.

Is planting peppers that grow upwards worth it?

If you want to dress up your garden or backyard deck and you also want loads of zesty peppers to use in the kitchen, then peppers that grow upwards are the way to go. These peppers are just as easy to care for as downward-growing peppers. And they often produce many more fruits by comparison, so they definitely earn their keep.

Whether you’re starting a salsa garden or you just want to spruce up your patio, peppers that grow upward can help. Grown in the garden or in large pots, these peppers are a showstopping addition to any landscape.