How To Grow Thick Rhubarb Stalks 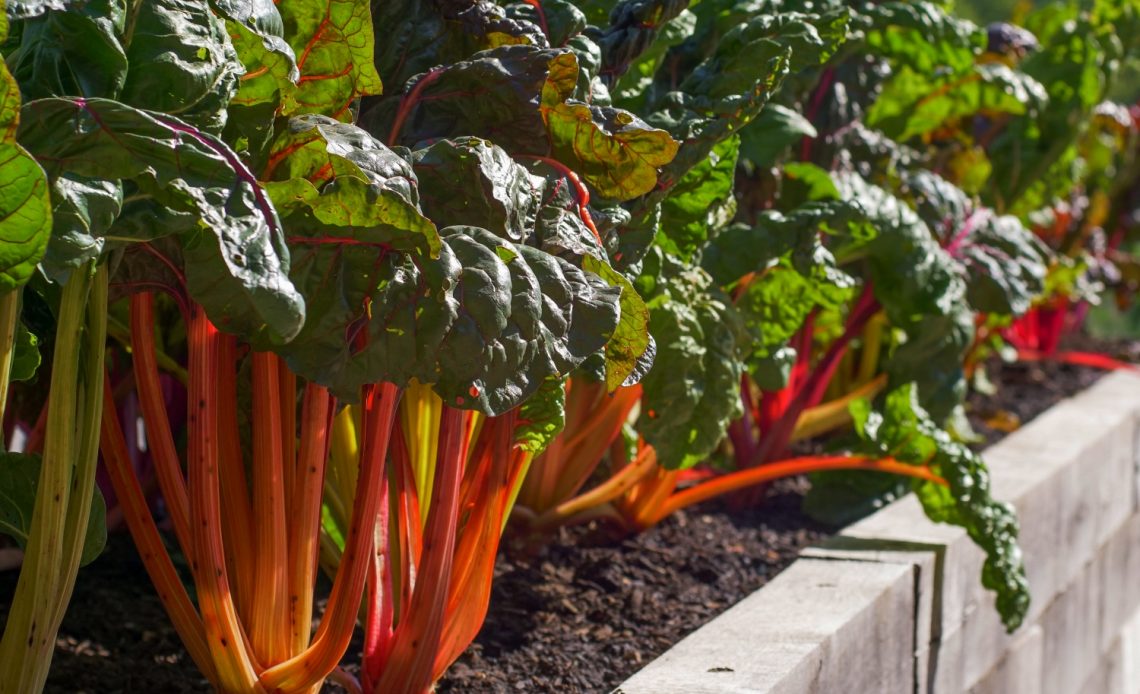 A tart, crisp vegetable that looks a lot like celery, but takes on magenta to deep red hues, rhubarb is perfect for pie fillings, jams, and preserves. This perennial garden favorite is one of the earliest producers in the season, and it couldn’t be easier to grow. But rhubarb plants can develop problems if their soil, sun, and water requirements aren’t meant. One major issue is when rhubarb stalks stay thin. If your rhubarb plants have come up puny and spindly in the past, it’s time to learn how to grow thick rhubarb stalks so you can finally get a crop worth eating!

Rhubarbs grow best in fertile soil that has been enriched with plenty of compost. Starting rhubarbs at the right time in the season, meeting their water and light requirements, and growing thick-stem rhubarb varieties, like ‘Cherry Red’, can also help.

Rhubarb is pretty easy to grow. But like other plants, it will always perform best when its growing requirements are met. Rhubarb likes nutrient-rich slightly acidic soil (6.0 to 6.8 pH) that drains well. These plants need a minimum of 6 hours of sunlight every day, and the more they can get, the better.

Rhubarb should be planted in spring and is ready to be harvested in July. This tasty veggie can be grown as a perennial in zones 3 through 8, but in zones 9 and 10, it dies back every year because it can’t survive the hot summers.

It’s not uncommon for young rhubarb plants to be thin and spindly. But by the time it matures, it should have stout stalks that have a pleasant crunch. If your rhubarb crops are always thin and weak, it could be because of the following problems.

Planting too early in the season

Starting your seedlings too soon can weaken them. If your seedlings are forced to stay indoors in their seed pots during spring frosts, they’ll become root-bound, which will greatly hinder their growth even after you move them to your garden. Root-bound seedlings may perform poorly, even for a season or two after transplanting.

Planting too late in the season

Likewise, rhubarb seedlings that are started too late may not perform well, either. If you plant your rhubarbs too late in the season, then they won’t have the time that they need to mature properly. So, when harvest time rolls around in midsummer, you’re left with pencil-thin stalks that are stringy and chewy and don’t taste very good.

Rhubarb plants are heavy feeders. They require a ton of nutrition to mature properly. So if you’re growing your rhubarb crops in nutrient-poor soils, the plants won’t have the vitamins and minerals they need to grow well. If your rhubarb plants grew thick stalks in their first year but developed thin stalks the following growing season, they probably need to be fertilized or have their soil enriched with some homemade organic compost.

Because rhubarbs are heavy nutrient users, planting them too close together limits the nutrition each plant receives. If rhubarb plants have to compete with each other for nutrients, then none of the plants will perform well. Alternatively, you may notice some plants growing well and producing normal-size stalks, while other plants remain thin even when both of the plants were cared for in the same way and grown and harvested at the same time.

Grown near the wrong companion plants

Growing rhubarbs too close to each other can certainly lead to thin stalks. But growing rhubarbs too close to the wrong plants can lead to poor performance as well. Cucumbers, for instance, use many of the same minerals as rhubarb, so they may steal nutrition away from them resulting in thin stalks. Watermelons and pumpkins may provide the plants with too much shade, and in the absence of their preferred light requirements, your rhubarb’s stalks won’t thicken up as they should. And that brings us to our next point…

If your rhubarb plants don’t get enough light, then they won’t grow sturdy stalks. Remember, rhubarbs need at least 6 hours of sunlight every day. If your plants are only getting morning or afternoon sun and spending the remaining half of the day in the shade, then it doesn’t matter how well you care for them otherwise. They probably won’t develop properly. Rhubarbs must be kept in full sun to grow well — unless you live in a hot, dry region, in which case your rhubarb plants may benefit from some dappled afternoon shade.

Rhubarbs grow best in soils that can be kept moist, but not soggy. Muddy soils suffocate the plant roots preventing oxygen from getting in and leading to root rot, a disease that can be fatal. Of course, if you allow your rhubarb’s soil to become too dry, they won’t thank you for that, either. Rhubarbs have high water requirements and their soil should stay damp to the touch. Proper hydration is critical for growing thick rhubarb stalks.

One of the biggest rookie mistakes when it comes to gardening is thinking that your soil’s pH level doesn’t matter. But it really does! If you try growing rhubarbs in alkaline soils or even soils that are too acidic, the plants won’t perform well. And the same can be said of just about any other garden plant (although some plants, like rosemary, are more tolerant of a range of pH levels than others).

All of the above

Sometimes, it’s one tiny mistake that keeps your rhubarb’s stalks from getting thick. But, often, it’s a combination of things. If your rhubarbs are planted in nutrient-poor soil and are drying out too quickly in between waterings, their health will suffer. If the plants are getting all of their light, nutritional, and water requirements, but they’re planted too close together and too close to other garden plants that they don’t get along with, their stalks may remain spindly. So take a close look at your rhubarb plants and their growing environment. If their stalks are staying thin, there’s a good chance there are multiple factors working against them.

How can you grow thick rhubarb stalks?

Plant rhubarbs at the right time

Start your rhubarb seedlings indoors 8 to 10 weeks before the last frost of the season, and transplant them to your garden once the threat of a freeze has passed. Starting your rhubarbs at the right point in the growing season gives them time to mature properly, so you can grow thick rhubarb stalks.

Test your soil before planting and amend it as necessary to keep it at the proper pH level. You can use certain organic materials to adjust the pH by a few points to make it more acidic or alkaline, depending on your garden’s needs. Add peat moss to acidify the soil, or wood ash to make it more alkaline.

Use a hand trowel and weed fork to work a healthy dose of organic compost into the soil surrounding your rhubarb plants. Do this in early summer to ensure the crops have enough nutrients to grow thick and sturdy. This will also help the soil retain moisture so you won’t have to water as often. Once you’ve harvested your rhubarb crops, amend the soil with some aged manure in late summer or fall to help see them through their winter dormancy and grow well during the next season.

Rhubarb plants should be spaced 4 feet apart at the minimum. These plants grow 2 to 3 feet tall by 2 to 3 feet wide, so they need plenty of room to spread out. This improves air circulation, preventing moisture build-up and fungal infections. Giving the rhubarbs a bit of extra space also makes it easier to care for individual plants throughout the growing season.

Grow rhubarbs near their favorite companions

Companion planting is a strategy that has been used for centuries to promote pollination and prevent insect infestations. Rhubarbs grow best near onions, garlic, and chives — strong-smelling veggies that repel harmful bugs. They also do well near strawberries and dill which share similar growing requirements and act as a living mulch to help the soil retain moisture, so your rhubarbs can grow their best.

Use organic insecticides as needed

Rhubarbs can fall prey to a number of insects, including flea beetles, loopers, stem borers, snails, slugs, and caterpillars. Check your rhubarbs for signs of infestation and use an organic homemade insecticide to keep these bugs at bay. If larger garden pests, like deer, are munching on your rhubarb’s foliage, try mixing up a dish soap solution to discourage them from eating the plant’s leaves and stems.

Give plants enough light and water

Make sure your rhubarb crops are planted in a spot where they will receive enough sunlight. If your region experiences serious heat waves, with temperatures in the 90s and 100s, then your rhubarb plants will benefit from a bit of shade during the hottest part of the afternoon. Be sure to check the soil regularly and keep it moist, particularly during droughts. Give plants a deep soaking with a garden hose once a week and water them as needed afterward. If you find the plants’ soil is drying out too quickly in between waterings, then apply a layer of mulch to slow evaporation.

Flowering requires a lot of energy. If your rhubarbs are sprouting flower stalks, they may not have enough nutrition left over to produce thick stalks. If you see flower stalks on your rhubarbs, trim them back and toss them into your compost bucket. This forces the plants to focus on foliage production instead.

Try varieties that have thick stalks

Refrain from harvesting rhubarbs during their first year

Tempting as it can be to start trimming your rhubarb’s stalks the minute you see them coming up, it’s important to give your plants a season to grow all on their own, without any outside interference. Avoid pruning or harvesting rhubarb plants during their first year (and their second year as well if you started the plants from seeds). This helps the plants become more established, and the stronger they are, the thicker their stalks will grow.

Older rhubarb plants will keep growing and growing, to the point where they can take over half of your garden. If you don’t keep the plants pruned back, they’ll crowd each other out, reducing sunlight and making it difficult for air to circulate in between plants. Left unattended, mature plants may also become leggy and thin. So to make sure they keep producing nice thick stalks, divide plants that are 4 or 5 years old in the spring to stimulate healthy new growth.

What else can you do to grow thick rhubarb stalks?

There are a few other tricks for growing thick rhubarb stalks, too. Try placing a bottomless box over the plants, which will force them to grow upward toward the light. Remove obviously dead foliage and broken stalks whenever you find them. And harvest only the largest stalks, leaving the smaller stalks to mature and provide energy for the plant. (Note: never eat rhubarb leaves, as they contain high levels of oxalic acid, and are toxic).

Growing thick rhubarb stalks is a matter of meeting the plant’s growing requirements. By enriching your garden soil and giving your rhubarbs plenty of light and water, you’ll be doing all you can to ensure you get the best rhubarb crop possible.