When To Transplant Cucumber Seedlings 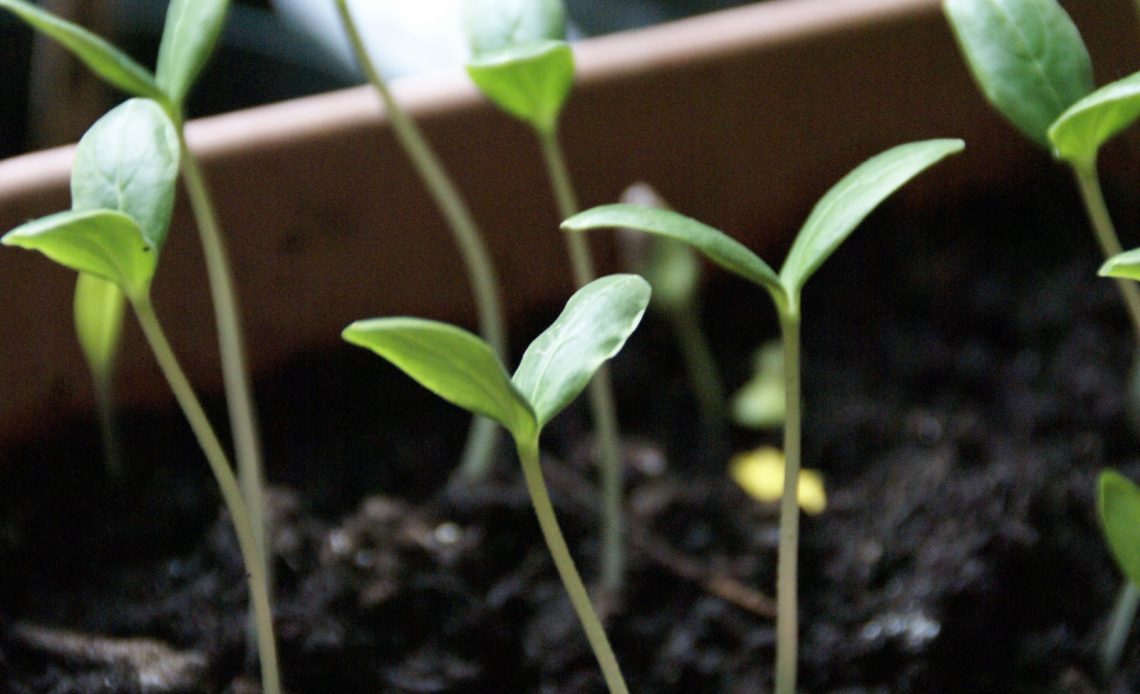 Cucumbers are one of the best plants for new gardeners to grow. They’re easy to care for, they’re relatively high-yield producing 5 to 8 cucumbers per plant on average, and the cucumbers themselves can be used for pickling, canning, snacking, and even frying. If you’re thinking of starting some cucumbers indoors to grow in your raised garden beds, you may be wondering when to transplant cucumber seedlings to maximize your success.

Cucumber seedlings can be transplanted to raised garden beds 2 weeks after the last frost of the season. It’s best to wait to move young cucumber plants outside until they have developed a set of true leaves, which will give the plants a better chance of survival.

How should you start your cucumber seedlings?

Starting cucumbers from seeds is easy. Simply sow cucumber seeds ½-inch deep in small paper cups or peat seedling pots filled with potting soil, and place the seedlings on a sunny windowsill where they can stay warm. Cucumber seeds should be started 2 to 3 weeks before the last frost of the season, and their soil should be kept moist, but not soggy, to help the seeds germinate.

Cucumbers sprout quickly. You can expect to see shoots 7 to 10 days after planting, though they may sprout as early as 3 days. Even though cucumber seedlings are fairly hardy, it’s a good idea to grow a couple of spare plants to have on hand in case any of the other seedlings die.

Remember, cucumbers produce roughly 5 to 8 cucumbers per plant. If you only want a few cucumbers to snack on, 2 to 4 plants should be plenty. But if you plan on doing a lot of pickling, or if you want to have extra cucumbers to share with your neighbors, 8 to 12 plants will give you plenty to harvest at the end of the growing season.

When to transplant cucumber seedlings to your garden

Cucumbers need warm weather to grow well. The hotter and more humid the climate, the better they like it. Young cucumber plants will die when exposed to temperatures at and below 35 degrees Fahrenheit for prolonged periods of time. So it’s important to wait until at least 2 weeks after the last frost of the season before moving your cucumber seedlings to your garden.

Before you move your young cucumbers outside, watch your thermometer for about a week to make sure temperatures remain consistent. Ideally, temperatures should be between 75 and 85 degrees.

Once the temperatures are high enough, check your seedlings for true leaves. Cucumbers are dicots, meaning they produce a pair of leaves (called “seed leaves”) when they germinate. These leaves are then followed by true leaves, which will take on the same shape as adult leaves. In the cucumber’s case, the first pair of true leaves will be heart-shaped and have toothed edges.

Seed leaves help young plants in the early stages of their development. But true leaves support the plants as they mature, giving seedlings a better chance of survival once moved outdoors. These leaves function as adult leaves should by supporting adequate photosynthesis so the plant can meet its energy needs.

What are cucumber’s growing requirements?

Before you transplant your cucumber seedlings to their permanent growing space in your raised vegetable garden beds, it’s important to consider their growing requirements so you know just where to put them. Cucumbers should be planted in full sun in cooler climates to help them stay warm. If you live in a warmer region, you can keep your cucumbers in a spot where they receive afternoon shade.

Cucumbers grow best in neutral soil with a pH of 6 or 7. But these are highly adaptable plants that are capable of growing in acidic and alkaline soils, too. Cucumbers are moderate to light nutrient users, so they can be planted in mineral-deficient soils. However, they benefit from having their soils amended with a dose of homemade compost.

What’s most important is that your cucumber seedlings be placed in soil that drains well. Cucumbers don’t like to sit in muddy soils that are sopping wet, but they prefer soils that stay slightly moist. If you find that your soil is drying out too quickly and your cucumber plants are wilting, consider applying a layer of mulch around the plants to help lock in moisture.

How to transplant cucumber seedlings to raised garden beds

When it’s time to transplant your cucumber seedlings, start by loosening the soil in your raised garden beds so that the roots have plenty of room to move as the plants grow. Even though cucumbers have fairly shallow root systems, they don’t like compacted soils. Make sure the ground is free of rocks, sticks, and other debris.

Use your hands or a small trowel to create holes twice as big as the seedlings. Holes should be 6 to 8 inches deep initially so you can backfill them with loose soil once the seedlings have been placed. You want the root collar of the seedlings (the place where the roots turn into the stem) to be even with the level of the surrounding soil.

It’s best to use bare hands when transplanting seedlings. Gardening gloves may help keep your hands clean, but they also make it difficult to feel the plant itself. Seedlings are fragile, and rough handling can kill them. So take your time when transplanting them to avoid tearing the plants up and destroying weeks’ worth of work.

How far apart should you plant your cucumber seedlings?

Spacing is critical when planting cucumbers. These are large plants with huge leaves and have a sprawling nature. If they don’t have enough space to branch out, they can wind up suffocating neighboring plants in your garden. Ensuring your seedlings are spaced far enough apart is essential to prevent competition.

Seedlings should be spaced 3 to 5 feet apart within rows with as many feet in between rows. This gives cucumbers plenty of room to spread out as they grow. If you have the time and the space for them, you can build trellises for your cucumbers to latch onto. Growing cucumbers vertically allows you to fit more vegetable plants in your raised garden beds.

There are three huge benefits to growing cucumbers up a trellis. First, upright plants produce more cucumbers. Second, the cucumbers of vertical plants are more uniform than those grown on the ground because gravity helps the cukes stay straighter. And, third, vertical growing frees up ground space around your cucumbers so you can plant low-growing companion plants like oregano and dill, which help repel harmful insects.

What are the benefits of growing cucumber seedlings in raised beds rather than straight in the ground?

The biggest benefit to growing cucumber seedlings in raised beds is that you have better control over what goes into the soil. The soil in raised beds is generally much looser than the ground, so it’s easier to mix sand, topsoil, compost, or manure in to amend it. Raised beds also make weeding and tending to the plants simpler because you don’t have to bend down so much. It’s much easier on the joints.

Raised beds also provide better drainage, and that’s something that cucumbers must have to survive. Cucumbers hate sitting in water. Over time, this leads to root rot, which can hinder crop production or kill the plants altogether. If you decide to grow your cucumber crop in raised beds, consider lining the bottoms with a layer of gravel first so excess water can escape.

While you should wait until warmer temperatures arrive before transplanting your seedlings, the weather doesn’t always like to cooperate. Growing your seedlings in raised beds makes protecting them from late-season freezes a more manageable task. It’s easier to drive a few stakes in the middle of your raised beds to drape a tarp over than it is to cover plants directly on the ground. And this makeshift greenhouse allows the plants to trap more heat than plastic laid directly over the ground.

One of the major risks of transplanting seedlings, cucumber or otherwise, is transplant shock. To prevent your young cucumber plants from succumbing to the harsher outdoor environment, set the seedlings outside in the afternoons if it’s warm enough. This will help them acclimate to the sun, the wind, and the outdoors in general.

We also highly recommend using some of the soil from your garden beds to start your seeds. Mixing equal parts potting soil and soil from your raised beds will prevent the cucumber seedlings’ roots from suffering from shock once you transplant them to their permanent home.

Overall, cucumbers are among the easiest garden vegetables to grow. Transplanting them successfully takes a little time and patience, but when you take every precaution, these hardy plants are more than capable of recovering. Proper care of mature plants will help you grow the best crop of cucumbers possible.