When To Pick Banana Peppers (Sooner Than You Think) 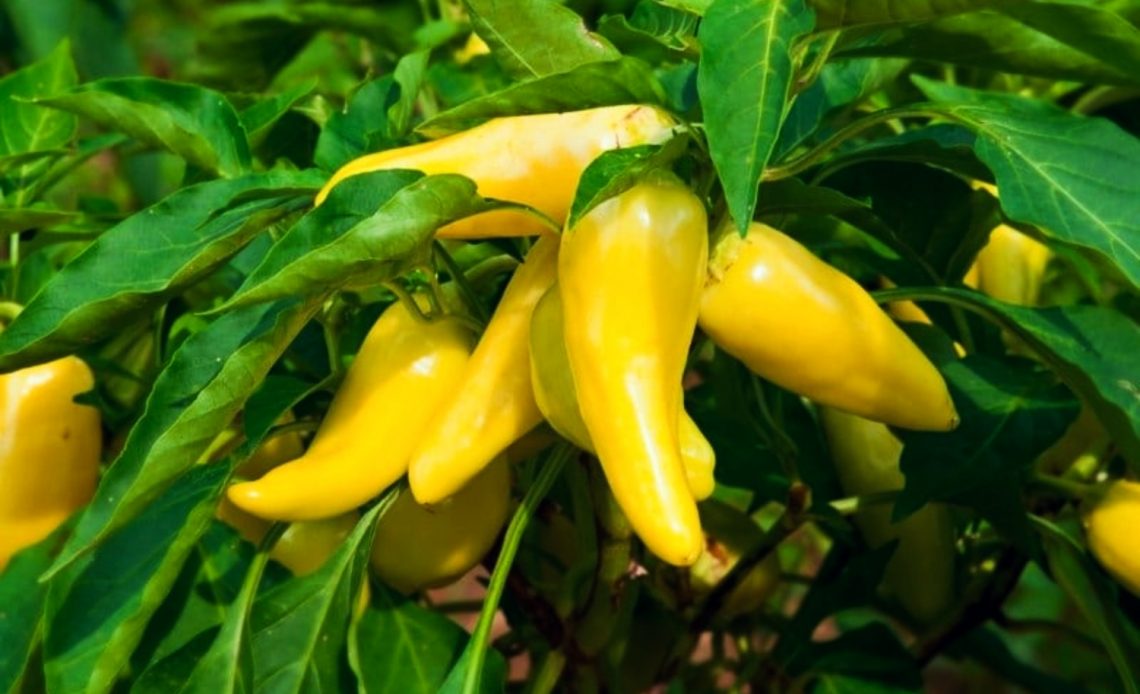 A crisp banana pepper harvested from your own garden can take a boring salad or sandwich and turn it into something special. Like nearly all other varieties of peppers, banana peppers are incredibly easy to grow. And with sweet and hot varieties, there’s a banana pepper for all taste palates. But how can you tell when to pick banana peppers, and how should you store them so that they stay fresh for a long time?

Banana peppers are ready to be picked when they’ve turned yellow to orange-red. That’s usually 70 to 75 days after they’ve been transplanted from their seed pots to their permanent spot in your garden. It’s best to store ripe banana peppers in the freezer, so they last longer.

How long does it take for banana peppers to grow?

Both hot and sweet banana pepper varieties are easy to grow from seeds. Seeds should be sown 4 to 6 weeks after the last frost of the season, and it can take up to 2 weeks for the seeds to germinate. After the seedlings develop their second or third set of true leaves, they’re ready to be transplanted into your garden.

Banana peppers grow best in hot weather (upper 70s to upper 80s) and prefer loose, fertile soil that has been enriched with plenty of homemade compost. The peppers should be planted in full sun, unless your growing zone sees heat waves in the upper 90s and 100s, in which case, your banana pepper plants should be kept in a spot where they can receive some afternoon shade.

Once the banana peppers have been moved to your garden, it takes around 70 to 75 days before their peppers are ready to be picked. However, this is by no means a hard and fast date. When your banana peppers ripen depends on many factors, including cultivar, how much moisture the plants receive, how hot temperatures were as the plants grew, whether or not their growing and nutritional needs were met, and how well the flowers were pollinated by birds and insects.

What color are ripe banana peppers?

It’s always a good idea to keep a timeline of when your plants were transplanted, when they flowered, and how long their fruits have been growing. This will help give you a general idea of how old the banana peppers are, and when they should be getting close to being ready to be picked.

But, dates aside, the easiest way to tell when banana peppers are ready to be picked is by keeping tabs on their color. When banana peppers first develop, they’re a lovely, healthy pale green color. And they stay that color as they continue to grow.

Only when banana peppers turn (appropriately enough) into a bright banana yellow are they ready to be harvested. At that point, the peppers should show no trace of green. It can take 1 to 4 weeks for peppers to ripen fully.

While you can certainly harvest your banana peppers the minute they turn banana yellow, leaving them on the plant a bit longer improves their taste, and this is especially true of hot varieties. The longer the banana peppers stay on the plant, the darker they’ll become. Very ripe banana peppers are a vivid orange-red color.

Why do some banana peppers turn purple?

Sometimes banana peppers develop purple streaks. This may be alarming to see, but these banana peppers are perfectly safe to eat. The purple streaks are the result of anthocyanin, the same pigment that makes eggplants and some carrots purple. Anthocyanins have potent antioxidant activity and support heart and brain function.

How big are ripe banana peppers?

Banana peppers are medium-sized peppers with a slightly curved shape. Peppers measure 2 to 8 inches in length, on average. How big your banana peppers grow depends on a number of factors. If the plants didn’t receive all of the nutrients they needed to produce, or if temperatures were especially hot and the plants became stressed, the resulting peppers may be stunted.

How many peppers does a single banana pepper plant produce?

Under ideal circumstances, when all of their vitamin and mineral needs are met, as well as their soil, water, and temperature requirements, banana pepper plants can produce 25 to 50 peppers in a growing season. The healthier the plant, the more peppers it can produce.

Banana peppers are self-pollinating, meaning they don’t rely on bees, wasps, hoverflies, or other garden bugs to help them reproduce. That said, many backyard gardeners have noticed a significant increase in crop yield when their banana peppers are grown as companions with flowering plants that pollinators are known to love, including geraniums, basil, nasturtiums, and rosemary.

How should you pick banana peppers?

Once your banana peppers have reached the desired level of ripeness, it’s time to harvest them. Using a pair of scissors or garden clippers, snip the pepper’s stem as close to the plant as possible. Once the pepper has been severed from the plant, you can trim the extra stem away if you need to.

Unlike radishes, broccoli, and carrots, banana pepper plants can be grown as perennials, particularly in warm climates. Be careful when harvesting peppers from the plants so you don’t stress them out. Treating the plants roughly by plucking the peppers off or jostling the foliage about too much can damage the plant, so much so that it may die before the next growing season.

When should you pick banana peppers?

Your banana pepper plants will likely continue to produce peppers once you’ve harvested some, but they won’t do so indefinitely. If you harvest your peppers early and often, your plants will have enough time and resources to produce more peppers. But if you want your peppers to take on an orange or red hue before you pluck them, then you probably won’t get as many peppers. How many peppers you get also depends on how far along in the season you are. Once the weather begins to cool down, the pepper plant’s growth quickly tapers off.

Do banana peppers continue to ripen once they’ve been picked?

Yes, they do, especially when left out at room temperature. If you store your peppers in a cool, dry pantry or cellar, then your peppers may darken over the course of a few days. If you picked your peppers a bit too early, leave them on the counter until they develop the ideal color before using them.

How should you store your banana peppers?

If you have more peppers than you know what to do with, your best bet is to freeze them. Once you’ve washed your banana peppers, allow them to dry completely before separating them into freezer bags. Fresh, whole banana peppers can last up to 12 months in the freezer. You can also slice the peppers to save yourself time in the kitchen, but note that this can cut down their shelf life by a few months. Consider double-bagging chopped banana peppers to prevent freezer burn.

To get the most out of your banana pepper plants, be sure to feed them with a 12-12-12 fertilizer just as they begin to flower. This boost in nutrients will give them the building blocks they need to produce a healthy crop.

Water is also critical to a pepper plant’s health, but too much can dilute capsaicin content, making them less zesty than you may desire. Check the soil of your banana pepper plants regularly. When the dirt feels dry 2 inches down, give the plants a drink. If you find the soil is drying up too quickly, then apply a layer of mulch around the base of the plants to help retain moisture.

Is growing your own banana peppers worth it?

Yes! Banana peppers are among the easiest garden plants to grow, and because they’re such prolific producers, they’re also among the most rewarding. When it comes to harvesting banana peppers, there’s nothing to it. Just double-check to make sure they’re yellow or orange, then snip them off, and store them in the fridge. It’s as easy as that!