Why Do Hummingbirds Stop Coming to Feeders? 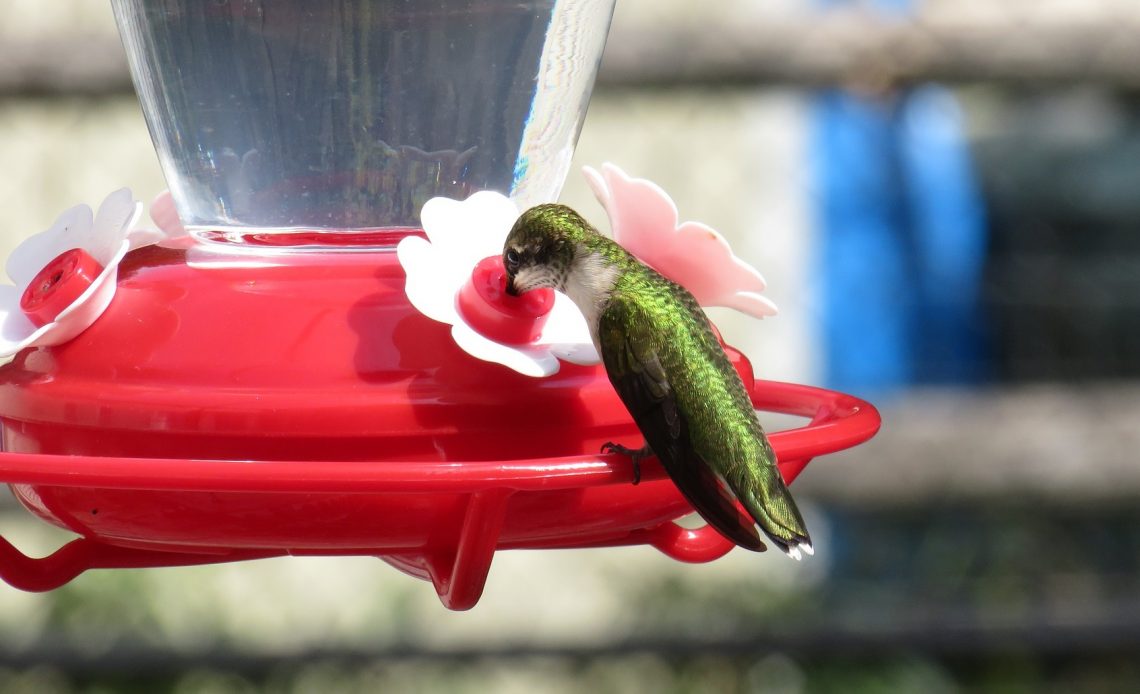 If you have ever been lucky enough to have hummingbirds come to your garden, you’re probably interested in keeping them coming back. Maybe you’ve placed a birdbath in your yard, planted various nectar-filled flowers, or even put out a hummingbird feeder. However, these beautiful little creatures stop flocking to what we put out for them from time to time. Why do hummingbirds stop coming to feeders – is there a reason for it?

There are several reasons why hummingbirds stop coming to feeders – many of which are completely natural. What’s more, there is sometimes little that you can do to ensure that they keep coming back to you. Provided you are keeping your garden in good order (and full of flowers), and your feeder’s in good condition, you’re likely doing enough to interest them.

Before we get deeper into why hummingbirds might disappear from your yard completely, we need to consider why they might not enjoy returning to your feeder.

The first – and simplest explanation – is that they simply don’t like the food you’re leaving out for them. You may be creating a nectar recipe that uses artificial sugar, for example. Always make sure to use natural sugar or sucrose. As this is akin to what they will find in the wild, it’s absolutely the best sugar for hummingbirds.

You may also need to clean your hummingbird feeder out. It’s a good idea to clean them regularly during visiting seasons, which may mean once per week. If there’s anything in your feeder that’s spoiled, you’re likely to deter birds – not hard to appreciate! Even the best hummingbird feeders need cleaning once in a while.

You may also notice hummingbirds refusing your feeder because they can’t find it. Try and place your feeders out in the open so they can spot them easily. Hiding it out of the way risks your birds passing them by – but once they know where your feeder is, they will memorize the location. Therefore, don’t be so quick to move it around, either!

It’s also possible that you’re putting your feeders out at the wrong time of year. Try to set them up at the start of spring, as this is when hummingbirds will start coming back to North America.

Finally, hummingbirds refusing feeders may be scared away by other animals. In particular, both ants and bees are likely to flock to sugary treats – and while hummingbirds can be aggressive, getting on the bad side of some insects is likely to hurt. Therefore, it probably will pay to clean out your feeders and move them elsewhere – setting up a moat is a great way to protect hummingbird feeders from ants and other pests, too.

Why have my hummingbirds suddenly disappeared?

So – apart from refusing feeders, why do hummingbirds disappear for a while? Beyond simply refusing the odd feeder, hummingbirds tend to stop coming to certain yards and gardens for reasons relating to migration, nesting, predator behavior, or finding better food elsewhere.

Hummingbirds migrate every year, often traveling over the Gulf Coast to reach South America. They typically leave during the winter and return to the US during the warmer months. What’s more, they are known for having fantastic memories – you’ll find that some hummingbirds return to the same spots year in, year out.

Therefore, you have every chance of seeing hummingbirds coming back to your yard after a few months. If you have an array of hummingbird-friendly flowers, and ensure to set up a feeder or two at the start of the warmer months, you’re doing all you can to welcome them back.

They can go on like this their entire lives, usually remaining loyal to the places that suit them the most. Many gardeners come to recognize the same hummingbirds living in their gardens every year – you might just get lucky this time around!

As you may know, hummingbirds are solitary birds, especially during the nesting season. Females will find the perfect spot, build their nests, and take care of the young independently. During those times, the males usually disappear from the area.

So, you may only occasionally see the female hummingbird as she is collecting food for herself and her young or while she is getting materials to build her nest.

It’s also worth noting that the more territorial male hummingbirds are known to chase the female of the species away. Therefore, it could be that a boisterous male bird – that’s purely visiting – has scared off a female visitor who’s regularly eaten from your flowers for the past few seasons.

Unfortunately, it’s the way of the natural world, and there’s nothing much we can safely do to change these behaviors. However, setting up multiple different feeders at different ends of your garden may help split the crowd a little and help female hummingbirds feel a little safer.

Tragically, many female hummingbirds are known to try and ‘look male’ to avoid unwanted aggression – spare a thought!

Whether they are in nesting season or not, hummingbirds are big eaters. In fact, they need to eat approximately every 15 minutes in order to keep their metabolisms going! Therefore, they need a constant supply of food. If hummingbird-friendly flowers happen to be scarce in your garden this year, then your avian friends will have to look for food elsewhere.

If they find spots nearby that are more replete in nectar-filled flowers – or where feeders are filled with more reliable sources of nutrition – then it’s likely you will be playing second fiddle to someone else’s yard!

Studies also show that local hummingbirds love local produce. They appear to prefer eating from flowers and plants that they recognize – it is a case of sticking to what they know and what they expect. It may take time, for example, for a hummingbird to trust a feeder.

What’s more, if you are planting non-native species of hummingbird-attracting plants into your yard, your visitors will still prefer the local variations. Therefore, don’t always be so tempted to bring in seeds from further afield if you want your hummingbirds to keep coming back.

Interestingly, it may be that your local hummingbirds are simply changing their diets a little. Female birds will often seek out a more protein-rich diet to help feed their young during nesting season. Therefore, they are less likely to seek out nectar-rich blooms, and are more likely to look for insects to feed on.

If your yard is low on insect populations, then it may be that your local birds have found a spot nearby where they are more widespread. It’s all the more reason to consider rewilding your yard and bringing some buzzing beasts into your garden.

Hummingbirds can get scared away

As mentioned briefly above, hummingbirds have also been known to leave yards for good when they feel threatened. As territorial as these little creatures are, and while they will take on animals far bigger than them, they are also somewhat aware of their size.

If there is a predator in the area that keeps attacking them, then they will leave. The predators can take the shape of bigger birds or even some of the furry friends in your own home. Cats – especially – are known for climbing trees and chasing birds.

The hummingbird is an immensely intelligent creature – if it knows threats are local and are likely, it won’t come back in a hurry. Don’t worry, however – they aren’t afraid of people on the whole (and hummingbirds won’t attack people in self-defense, either!). It’s not you, it’s them.

What time of year do hummingbirds stop coming around?

Hummingbirds in the United States usually migrate towards the south during the winter months. They may even start leaving local yards in late fall. Although this is partly due to the weather, it is mainly a result of a lack of food sources.

When most of the hummingbirds’ favorite flowers have died off, their food sources become dangerously low in the winter months. Therefore, they have to put themselves through long and difficult journeys in order to reach areas with more reliable food every year. The journey is so difficult that many hummingbirds are known to die before they reach the end of the trip.

However, some anecdotal evidence suggests hummingbirds can visit gardens year-round. This is due to a constant supply of food and hydration. However, this will not work in most cases, as harsher temperatures will be enough to freeze these birds away. Feeding hummingbirds in the winter isn’t unheard of, but it’s not common.

Hummingbird nests cannot survive the harsh winters either because of inadequate shelter and unfavorable conditions.

So, if the hummingbirds in your garden have left for the winter, you can rest assured knowing that it is the best thing for them – and that they could very well return next year.

Why are we not seeing as many hummingbirds this year?

Even though you may have the right food, flowers, water, weather, and a safe enough space for hummingbirds, you may find that you have seen far fewer this year than the year before. So, what is going on?

First of all, hummingbird populations can vary from year to year – it’s not normally something to worry about. Although they are indeed known for being relatively loyal to reliable food spots, areas naturally change in terms of flora and fauna – and frequently, too.

Be it natural food sources, water sources, or even ideal nesting spots, any slight change to us could significantly alter hummingbirds’ lives – and encourage them to flutter elsewhere. Generally speaking, hummingbird numbers have not drastically changed in the past few years, indicating no serious issue to worry about.

In fact, it could simply be a sign that the wildflower populations have increased in other areas close by, or that more people are providing adequate homes for hummingbirds. Crucially, it’s important not to take it personally!

Don’t worry too much – hummingbirds can be skittish sometimes when it comes to food, but if they’re not appearing in your yard much lately, they will normally have a very good reason for staying away.