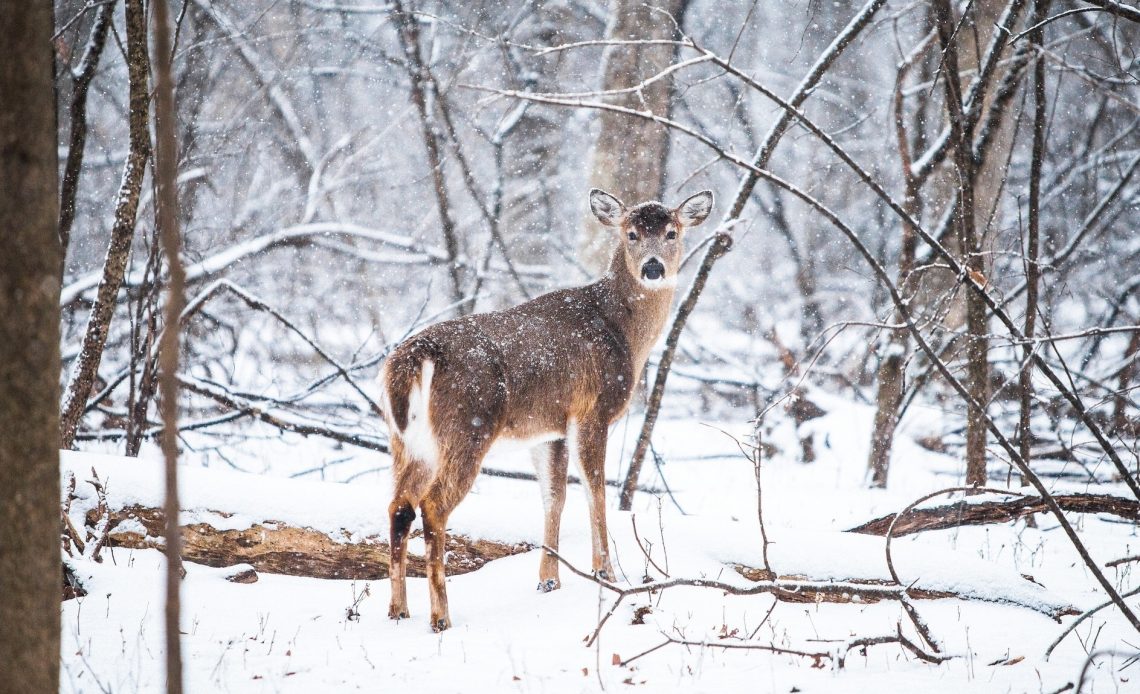 Deer spend their lives foraging for fruits, nuts, seeds, and greenery. They are herbivores, after all. But every now and then, you’ll hear a story of a lone deer seen nibbling on roadkill or eating raw meat out of a garbage can. So, what’s the deal? Is this something out of a horror movie, or do deer eat meat?

Yes, deer do eat meat sometimes. However, this is not something that they do on a regular basis. Deer usually only eat meat when food is scarce or when one of their vitamin or mineral requirements is not being met.

Why do deer eat meat?

Between the rabbits, the squirrels, the birds, and everything in between, deer have a lot of competition when it comes to their food sources. And when the deer population booms, those resources become even more limited. During dry periods, many of the deer’s favorite plants wither and die. As fall approaches and winter takes hold, the vegetation goes dormant only to reemerge in spring.

So for at least four months out of every year, food is hard to find. And that’s a good year. Drought years may see upwards of six months with limited food availability. What’s a hungry deer to do with no vegetation around to nibble on? When there are no delicious plants to eat for weeks at a time, suddenly that dead rabbit on the side of the road starts to look pretty tasty.

Usually, when deer and other herbivores eat meat, it’s strictly for survival. In some instances, if a plant-eating animal is sick, it will eat meat. This is especially the case when an animal that has given birth can’t recover its strength. It may eat its afterbirth or even its own young to get back on its feet.

Do deer hunt and kill other animals for their meat?

Do deer eat meat? Yes, they do. But do deer hunt down other animals and kill them like wolves, mountain lions, and other predators? No. Then again, there’s always a chance that an herbivore can develop a lust for blood.

Disconcertingly, there are documented cases of herbivorous animals eating meat just because they like it. In 1958, an American gelding affectionately called “Freight Train” was observed stalking ducklings walking in a line and eating them one by one. Deer, too, will consume birds. They may not be able to reach them flying high up in the trees, but they’ll raid the nests of ground-dwelling birds like quail, eating their eggs and their young.

Hobby farmers have also observed deer stealing eggs from their laying houses. Eggs are an excellent source of protein and omega-3 fatty acids that help keep a deer’s coat shiny. They’ll happily eat chicken and duck eggs, but they prefer the smaller eggs of domesticated game fowl. Since they enjoy eating wild baby birds, it stands to reason that they’ll eat farm-raised chicks, too, if given the chance.

If a carcass has already been torn apart by other animals, deer may find pieces small enough to consume. Some parts of the body are more tender and easier to swallow whole than others. Organs are easier for deer to eat than muscle meat. Deer are especially fond of eating an animal’s intestines because they contain partially digested foods the deer benefit from.

Is meat good for deer?

Plants make up the bulk of a deer’s diet, but plants don’t have much nutrition. That’s why animals that eat plants tend to be grazers. They have to consume huge quantities of vegetation in small amounts over a period of hours to meet their nutritional needs.

Furthermore, many of these grazing animals are ruminants. They have stomachs with four chambers that break down food and digest it for hours extracting every bit of nutrition it has before discarding it.

Because ruminants are herbivores, they must spend most of their time eating not just to get enough food, but also because their stomachs need to have food in them at all times. When these animals go without food for long periods, they can develop gastric ulcers because all that stomach acid doesn’t have anything to work on.

So, in a way, meat can be good for deer. It’s highly nutritious, deer are often unable to consume large enough quantities to severely impair their digestion, and it can help them stave off gastric complications when grazing options are limited.

Do deer eat bones as well?

In suburban areas deer will chew on chicken and beef bones found in garbage cans or near picnic areas and barbecue pits. Many hunters have noticed herds of deer hanging around gutting sites in winter, chewing on discarded bones. Doing so can help stimulate saliva production, which works to neutralize the excess stomach acid that builds up as a result of limited forage during the cold months.

In one rare instance, a deer was captured chewing on human bones. The decomposing remains were placed outdoors on a so-called “body farm”, where they could be studied by forensic experts. A trail cam was set up to see how animals interacted with the bodies. Little did the experts think the deer would be the ones eating them.

Is meat a good source of nutrition for deer?

There are some instances when deer will actively search for meat. When this is the case, and they don’t just find carcasses by happenstance, it’s usually because the deer’s vitamin and mineral levels are deficient. Meat is an excellent source of nutrients and protein.

Meat is rich in iron. This is why a doe that has given birth may crave meat. It gives them the raw materials their bodies need to build their blood levels back up. Meat is also a good source of vitamin B12, which plays a critical role in iron absorption. Low levels of B12 can cause a specific type of iron deficiency called pernicious anemia.

The raw meat that deer consume is also an excellent source of vitamin D. This is one of the reasons why deer are seen chowing down on other animals during the winter. There isn’t much sunlight in the cold months, and limited sunlight leads to low levels of vitamin D. Eating meat can help deer restore their levels quickly.

Other vitamins that deer reap from meat include selenium, zinc, and B vitamins, especially vitamin B3, or niacin. These vitamins aid in thyroid function, healthy red blood cell count, and energy production, among other things. Vitamins and minerals aside, raw meat is also full of protein that can help deer prevent muscle-wasting when food is scarce.

Are bones nutritious for deer to snack on, too?

The bones of a dead animal are rich in calcium and phosphorus. If a deer is lacking these minerals in their diet, they’ll gnaw on bones just to get enough. Squirrels, rabbits, and other small mammals will do the same.

Male deer shed their antlers every season and grow new ones. This process increases the buck’s need for calcium and phosphorus. Gestating does also require higher doses of these two minerals. Since many soils are deficient in calcium and phosphorus, it can be difficult for deer to get all of the nutrition they need. Bones make for an excellent alternative for them.

How can you help deer meet their nutritional requirements?

If you want to help your local deer meet all of their nutritional demands, try feeding them a prepackaged deer feed. These fortified feeds have been specifically formulated to help the average deer meet its daily vitamin, mineral, and macronutrient needs. This is a great place to start.

If you’re having trouble tracking down deer feeds, there are plenty of other foods you can leave out for them to eat. Scattering peanuts, sunflower seeds, soybeans, and pumpkins throughout your yard can help pad out their diets, too. Planting ryegrass in the fall is another great way to give deer a little something to forage on throughout the winter.

Ultimately, the answer to “do deer eat meat?” is yes. And the reason why is because it can help them get more of the vitamins and minerals that, for whatever reason, they aren’t getting enough of. Leaving a commercial deer feed specifically designed with these animals in mind will help them out when food is scarce.