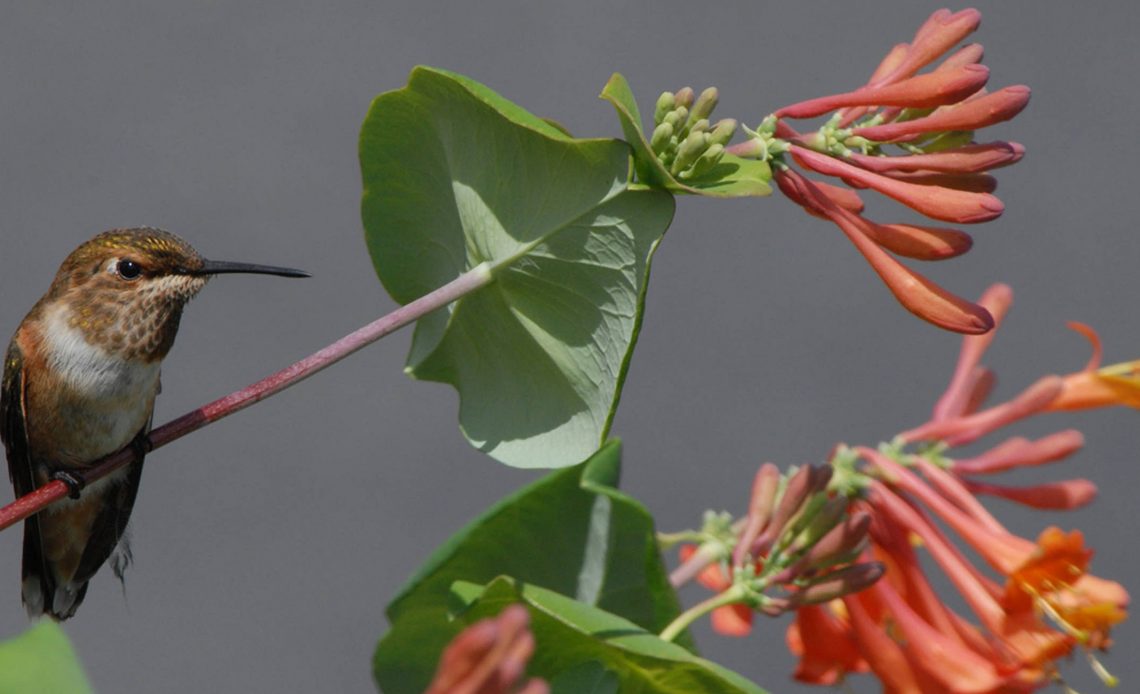 With their blurring, buzzing wings, and bright, jewel-like colors, hummingbirds are a delight for any gardener or outdoorsman. They are uniquely beautiful and serve as excellent pollinators. And since they can be found in every state except Hawaii (yes, even Alaska), there’s no reason not to try and attract them to your garden. With that in mind, what sort of flowers attract hummingbirds? Do hummingbirds like flowers like honeysuckle?

Why does honeysuckle attract hummingbirds?

Hummingbirds feed upon nectar, the syrupy liquid that flowers produce to attract pollinators. They are attracted to bright colors, particularly deep reds, but they will also investigate flowers colored yellow, purple, orange, and pink. With their long, curved bills and ability to hover, they much prefer tubular flowers that they don’t need to land on to get their food.

They will also look for flowers that bloom abundantly and consistently, providing a reliable and rich food source.

You can probably see that honeysuckle meets all of these briefs! The orange and pink flowers are just the right shade to be attractive to hummingbirds, they produce large amounts of delicious nectar, and the blossoms are just the right shape for hummingbirds to dip their bills into. The plants produce cascades of fragrant flowers, and they continue blooming from late spring through to early autumn. That makes a lot of food that’s perfect for hummingbirds!

Are hummingbirds attracted to the scent of honeysuckle?

Whether hummingbirds can smell them or not, the rich scent of honeysuckle will be a joy to you and will help attract other wildlife to your garden, including bats, moths, and butterflies.

Which honeysuckle is best for hummingbirds?

A large variety of honeysuckles (genus Lonicera) can be found in the United States, but that doesn’t mean all of them are right for your garden. Some species like the Japanese honeysuckle and the Morrow’s honeysuckle are invasive species. Not only do they crowd out native plants and flowers, but many of these invasive honeysuckles are mildly poisonous, and can be dangerous to animals and small children, even leaching toxins into the surrounding soil. These invasive honeysuckles often look quite similar to native species, so it can be difficult to tell just what species you have, and once they get into your garden their hardy nature makes them difficult to get rid of. It’s important to know what species you have before you plant!

How do I grow honeysuckle for hummingbirds?

You’ll be happy to know that honeysuckle is one of the easiest plants to grow in your garden.  They are among the many vines and shrubs that hummingbirds love and can be deciduous or evergreen. The vines of honeysuckle plants can be trained to cover bare walls or trellises or can be used as ground cover (climbing is encouraged if you want to attract hummingbirds, however), and the shrubby species can be trained to form short, dense hedges.

Honeysuckles prefer rich, loamy soils, but will grow in just about anything, so long as the soil is well-drained but moist. They like to have shady roots, but have at least partial sun upon their blooms and leaves. Their growth is prolific, so make sure you both want honeysuckle in your garden and that you have the right species for your area; once the plant has become established, it will be very hard to remove!

If you are having trouble with deer in your garden, you will be glad to hear that most native species of honeysuckle are deer resistant, so even if you want to attract deer to your garden you can have a plant for the pollinators that the deer won’t be likely to touch.

Humans can eat honeysuckle nectar too!

Honeysuckle gets its name because humans, particularly children, love to suck the sweet nectar from its flowers. This nectar can be eaten raw, or used in various recipes; you can try using it to make syrup, sorbet, ice cream, jelly, and tea…it’s a natural and delicious sweet treat.

Just make sure that you know which species you are harvesting the nectar from, and don’t use any other parts of the plant unless you are one hundred percent sure it is safe! The berries of several honeysuckle species, in particular, can be mildly toxic.

Honeysuckle is the perfect flower to help attract hummingbirds to your yard, but that’s just the start of its charms. The flowers are attractive to a wide variety of pollinators, and bring a lot of joy to humans too. These fragrant, delicious flowers are a wonderful choice to add to your garden.